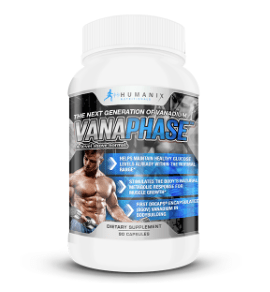 Vanadium is a mineral and the foundational ingredient in Vanaphase.

Specifically,Bis-Glycinato Oxo Vanadium is an organic complex of glycine and vanadium, and it’s designed specifically to be absorbed efficiently.

UsingBis-Glycinato Oxo Vanadium as a supplement is different from many of the other products we review.

We decided it would be a good time to take a look at Vanaphase. What are the claims?

Is there anything to know about Vanaphase and its possible side effects?

The Humanix Nutritionals company sells Vanaphase.The company is in Massachusetts.

The Humanix company says they work to offer supplements that increase strength and endurance.

General things Vanaphase may help with include developing fuller, harder muscles and a leaner body.

The company that markets Vanaphase said using it can help improve pump and vascularity as well.

It may help the body more productively and efficiently utilize carbohydrates.

Specific claims you’ll see from the creators of Vanaphase include:

As we mentioned at the start of this post, the primary ingredient in Vanaphase is called Bis-Glycinato Oxo Vanadium.

Generally, Bis-Glycinato Oxo Vanadiumacts similarly to insulin in the body.

It stimulates the uptake of glucose and oxidation of glucose in the cells.

It may also increase insulin sensitivity and lower LDL cholesterol.

In terms of helping with muscle growth, not as much.

In Vanaphase there’s a combination of vanadium as well as glycine.

Once you get past the long name, this is just something that helps improve the absorption of the vanadium.Bis-Glycinato Oxo Vanadium alone isn’t great when it comes to absorption.

This is a common issue with a lot of supplements.

The use of glycine is meant to promote optimal absorption and utilization.

What Do the Reviews Say?

One of the biggest issues with Vanaphase right now is the lack of reviews.

It’s a relatively new product, and it’s tough to find any outside information about it.

We checked out Amazon, and the product is listed, but there aren’t any reviews.

If you search Vanaphase on Facebook, some influencers have recently mentioned Vanaphase.

They do say they’ve seen results with the product, but these aren’t necessarily unbiased reviews.

The company does offer various affiliate programs with Vanaphase.

On Instagram, some people have recently mentioned Vanaphase or tagged it, but again, there aren’t any reviews.

I plan on testing this at some point, so check back regularly for updates!

A lot of times when we’re reviewing supplements we might learn about side effects from other people who have used the product.

Since there aren’t any reviews for Vanaphase that we could find, we looked at the primary ingredient—vanadium.

Some researchers have theorized vanadium or its derivatives could contribute to symptoms of depression or bipolar disorder at very high doses.

Sometimes doctors will recommend a low vanadium diet for people who struggle with bipolar disorder.

However, there aren’t any credible, supported scientific links between the two right now.

Supplementing with vanadium shouldn’t theoretically be a problem for someone with depression.

Even so, you may want to speak to your doctor if this is a concern for you.

We did some further research and vanadium is listed as likely safe in adults, if they use less than 1.8 mg a day.

At higher doses side effects are possible.

Side effects of high doses can include abdominal pain, nausea, gas, and diarrhea.

There have also been reports of a green tongue developing, low energy and nervous system problems.

In very large doses and when used for extended periods of time, it may cause kidney damage.

Since the research is fairly limited, it’s tough to determine what is considered a high dose.

Vanadium might interact with blood clotting and diabetes medicines as well.

Alright, if you’re still interested in taking Vanaphase, how do you use it?

Instructions direct taking one capsule, three times a day. Use it with your three daily meals.

So, you take one with breakfast, one with lunch and one with dinner.

Don’t take it on an empty stomach.

Can Women Use It?

Sure if you want to use Vanaphase, there’s no reason a woman can’t use it as well as a man.

Some of the people on social media advertising Vanaphase are women, in fact.

If you’re pregnant or nursing you should talk to your doctor first.

You can buy Vanaphase directly from the Humanix website.

They donate a percentage of all purchases to veterans, which can be a plus for some buyers.

You can buy it on Amazon as well.The price is the same, and you can take advantage of free two-day Prime delivery.

It’s tough to make a recommendation about Vanaphase right now.

It would be useful to see more reviews from users, but overall it may be worth trying.

The key ingredient which is a derivative of vanadium has been shown to have positive health benefits.

It may be valuable as a pre-workout supplement as a result.

One thing to be aware of, however, is how much you’re using.

As long as you aren’t using an excessive amount, Vanaphase may be safe.

At higher doses, you could experience side effects.

I have Vanaphase on my list of supplements to test, so I should be updating this review within a month or so.

Have you tried Vanaphase? Let us know what you think