One of the main reasons I started this website a few years back was to try to make some sense of the exploding online bodybuilding supplement market, and these days, it’s more necessary than ever.

With so many products, covering similar, different, and overlapping needs, it’s tough to just keep up.

One of the biggest problems lately keeping track of all the different products with almost identical names.

A visitor to SupplementCritique.com asked me to check it out, so I started with a quick Google search on the product name.

No less than three separate supplements popped up in my search, and several of the websites alternated between the three as though they were the same product.

Despite what you’ll see on some other review websites, Alpha Fuel 720 is a post workout recovery supplement designed to help your muscles and your body heal, repair, and rebuild after your toughest workouts.

Most people underestimate the importance of rest and recovery, but these are hugely important factors in your overall program to build muscle.

When you don’t give your muscles the proper environment and enough rest, you won’t achieve the results you work so hard for.

Alpha Fuel 720 claims to give you that environment so you can go back at the gym even harder next time, creating a cycle of harder-charging workouts and greater results.

This is where most of the confusion lies.

Check out this example:

Needless to say, this causes a lot of confusion about what Alpha Fuel 720 really is, and especially about what’s in it.A lot of these websites combine ingredient lists from the different supplements and say that’s what’s found in Alpha Fuel 720.

But the only real information we can count on is what we find directly from the Alpha Fuel 720 people, on their official website.

This is a very short list, and truthfully, as a post workout supplement, it makes no sense.

These are the building blocks of new muscle and muscle repair.

Without them, it’s hard to imagine a product even calling itself a post workout supplement.

Here’s a little bit about the listed Alpha Fuel 720 ingredients and what they can do for you:

So basically, as a post workout supplement, I’d have to say the formula is pretty weak.If I were to guess based on those ingredients what kind of supplement Alpha Fuel 720 was, I’d say natural testosterone booster for sure.

And without any knowledge of dosages used, it’s likely that even as a testosterone booster, it’s weak.

Where to Buy Alpha Fuel 720

Alpha Fuel 720 is currently only available online through their official website.You can either buy your bottle or bottles outright, or you can sign up for their free trial offer, but don’t be fooled, the trial is anything but free.

In fact, it could be the start of a monthly billing nightmare that you’ll be cursing yourself for getting involved with in the first place.

I’ll explain how it works:

If you don’t want to be charged anything beyond the initial shipping fee for the trial, call within 18 days of your original order date and tell them you want to cancel you subscription.If you get through and you’re understood, that should be the end of it.But most people don’t know or understand the terms of the offer until they see the first $97.99 charge on their credit card bill.At that point, it’s usually impossible to get your money back, but you must still call and cancel your subscription to avoid further charges.

What To Do If You’ve Already Been Scammed

If you notice a charge or charges on your account, you need to contact Alpha Fuel 720 by phone as soon as possible to cancel and further charges.You should also request a refund for charges already incurred, but your chances of getting that are pretty slim.

The Alpha Fuel 720 website lists 2 separate customer service telephone numbers with 2 separate hours of operation, and they mention several times in the Terms & Conditions that you need to cancel by phone. 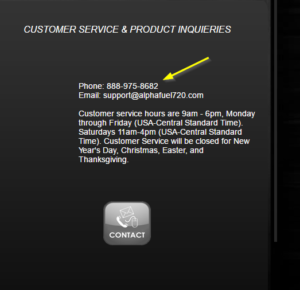 And here’s what phone number listed in the Terms & Conditions:

If you have been caught up in this scam, and you’re being charged, I recommend you keep calling each of the numbers within their stated business hours until you’re able to get through and take care of your cancellation.

Make sure you note the time, date, customer service agent name, and any confirmation number or code they may give you.

Send an email as well, but the Terms state several times that cancellations must be done over the phone so make sure you call as well.

If you don’t want to get wrapped up in the free trial craziness, you can purchase Alpha Fuel 720 with a straight up sale, no strings attached.

A single bottle sells for that $97.99 price, but if you buy multiples you’ll see a hefty discount:

These prices actually make no sense.If one bottle is $98, how are 2 bottles $115, and 3 bottles $140?Clearly, if you plan to us Alpha Fuel 720, the way to go is to buy the stuff outright at these huge discounts.

Is There A Money Back Guarantee?

When you go with the trial offer, your money back guarantee is basically built into the offer.

If you don’t like your results after a week or so, call and cancel so you don’t get charged full price.

But if you use the straight up sale model, there is a money back guarantee offer that applies to you. It’s terms are not set in stone.

Alpha Fuel 720 says contact them and they’ll consider your request on a case by case basis.

The company name listed in their contact information and all throughout their Terms & Conditions document is just Alpha Fuel 720. But they list several different corporate address: one in Cheyenne WY, one in Henderson NV, one in San Diego CA, one in Del Mar, CA, and even an international address in Watford, United Kingdom.

We’ve seen these same addresses listed for several other supplements we’ve reviewed over the years.

What this really means is that this same company makes lots of different supplements, and maybe even some other kinds of products as well, but they don’t want customers connecting the dots between them.

They run this “free trial scam” with so many different products that if they put them all under one corporate banner, people would quickly learn to stay away from this one company.

But since they’re not outwardly linked under one name, they can appear unrelated and not suffer the consequences of a negative reputation for one of their other products.

If you can think of a reason to use Alpha Fuel 720, you’ll have to let me know because I can’t see any.

The company seems to be completely unconcerned with how they present the product, how they price it, how they are perceived. They found a marketing formula that works.Get a website up, offer a “Free” Trial that actually traps customers into repeat billing, and make a bunch of money off of unsuspecting customers thinking they’re trying something for free.

When people start to catch on, change the name and start the process all over again.

It’s a winning marketing formula, but what we’re looking for is winning supplement formula, and Alpha Fuel 720 ain’t it.

We’ve seen it dozens, maybe even hundreds of times.

Alpha Fuel 720 is just one more. Don’t be fooled, but if you already have been, use the contact information above to control the damage.