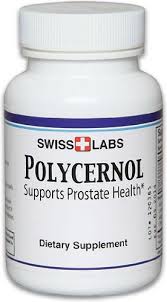 Polycernolis a combination supplement of sorts.

It works to support the health of your prostate while it also improves sexual performance.

The two are certainly related, so it’s actually surprising that there aren’t more supplements addressing the two areas at once.

Polycernol promises to boost your libido, improve your erections, decrease pain while urinating, increase energy, help you get a more restful sleep, and improve your overall health. We took a look at the ingredients as a way to help determine whether or not Polycernol is likely to make good on its promises.

Polycernol Ingredients and How They Work

Several of the ingredients in the Polycernol formula are commonly used in prostate support products, but we don’t see much for the male enhancement side of things.

It’s always helpful to look at both sides of a product before deciding if it’s right for you.

I was not able to find a source for purchasing Polycernol.

It used to be available through Swiss Labs and NutriCell, but this no longer seems to be the case.

I don’t know if it was poor marketing or just a poor product, but it seems that Polycernolis no longer offered as an option to combat ailing prostate health and lackluster sexual performance. That’s okay, though.

There are enough other options for both that you’ll barely miss it.

Have You Used Polycernol? Leave Your Review Below!

Why am I being pestered with phone calls re an account I wrote to you CANCELLING on 31 Jan 2016? -Alexander

SupplementCritique.com is a review website. We don't sell supplements or maintain accounts. You'll have to contact the company you placed your order with.- Rob

SupplementCritique.com is a review website. We don't sell supplements. You'll need to contact the company you ordered from originally.- Rob

I've never seen a Polycernol pill myself, so I don't know, but I think it's been discontinued anyway. Give Prostacet a try instead. It's a soft gel tablet which might be easier to take.- Rob

Is this product known to help 90 yr. guy -Erhart

I don't know for certain, but I don't see why not.- Rob

Have I got an account with you? My bank paid out some money to a firm I do not know I am just enquiring as you may supply me with my Polycernol. -Michael

It's not us. SupplementCritique.com is a review website. We don't sell supplements. You'll need to check directly with Polycernol.- Rob

Was this question helpful to you?
Thank you for your feedback.
ASK A NEW QUESTION
Show All 6 User Questions & Answers

6 comments on “Polycernol Review – Does It Work?”