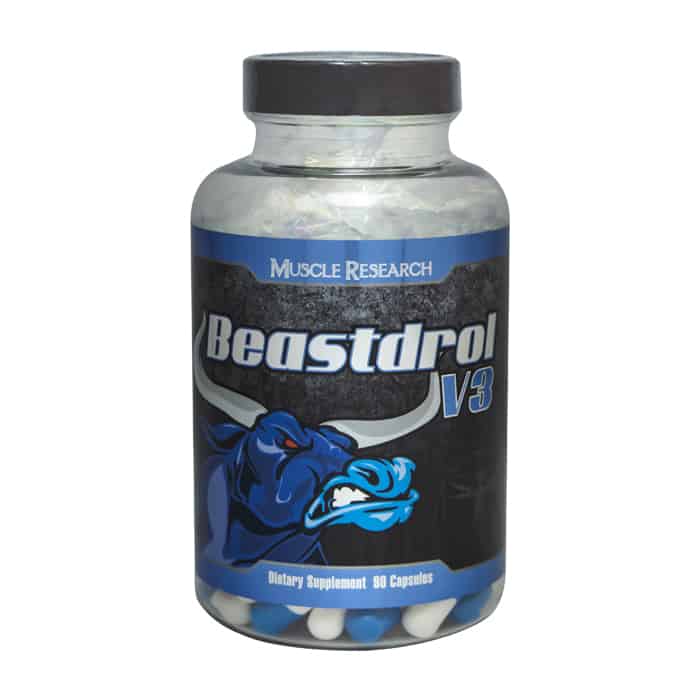 Home » Prohormones » Beastdrol v3 Review – Should You Use It?

The world of bodybuilding supplements is always changing, and that has as much to do with FDA regulations and bannings as it does with advancing scientific research and technology.

First there was Superdrol, but it turned out to be very toxic to the liver, so it was banned and replaced by Beastdrol v2. Not long after that, Beastdrol v2 got banned.

But apparently, you can’t keep a good beast down, because Muscle Reasearch is back with Beastdrol v3.

They want you to believe Beastdrol v3 is every bit as effective as the original, but is that even possible?

There are lots of skeptics out there, so we’ll be breaking it down to find out.

By using Beastdrol v3, in a few weeks, you should see moderate, dry, lean muscle gains.

How much depends, of course, on your diet and workout regimen. But Beastdrol v3 helps with:

Beastdrol v3 doesn’t convert to estrogen, and there are anti-estrogen components included in the formula as well.

That means you’re not dealing with gyno or with gains that disappear post cycle because they’re primarily water. 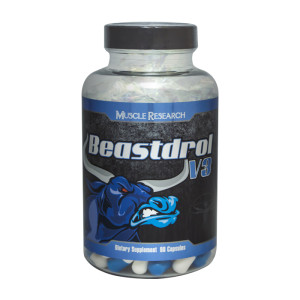 The main component in Beastdrol v3 is 1-DHEA (aka 1-Androsterone) which converts to 1-Androstenediol, 1-Androstenidione and/or 1-testosterone.

Basically, what you’re looking at is an androgenic potency of about the same as testosterone with a somewhat higher anabolic potency.

It will not convert to estrogen, so you’re assured of getting 1-testosterone or 1-androstenediol.

How To Use Beastdrol v3

Each Beastdrol v3capsules contains 100mg of 1-DHEA. You’ll need at least 300mg to be effective.

Each bottle contains 90 capsules, so at a dose of 3 per day, a bottle will last through a 30 day cycle.

Depending on your experience, size, and fitness level, you can take up to 600mg (6 capsules) a day.

You’ll want to divide your dose into 2 or 3 smaller doses throughout the day, reserving your largest dose for about 45 minutes prior to your workout.

One of the most dreaded side effects with prohormones is gyno.

If you’re prone to male pattern baldness, Beastdrol v3 may hasten that effect.

The most commonly reported side effect is a general lethargy.

Most of these side effects are considered to be mild, but if you are sensitive to them or take it and begin to experience them, pay attention to your body and think about stopping if need be.

While it’s less important than with previous versions, it’s recommended that you support your Beastdrol v3 cycle with liver support supplements.

You may also want to add an extra estrogen blocker if you are prone to gyno.

You’ll also need to do PCT after your Beastdrol v3 cycle to maintain gains and make sure natural testosterone levels are back to where they need to be.

You can use Beastdrol v3 alone or as part of a stack.

Stacking with something like 19Nor-DHEA that converts to Deca would also increase gains and make them come quicker.

Whether you use it alone or with a stack, you won’t want to run Beastdrol v3 for longer than 6 weeks without taking a break.

Up till now, we’ve focused on what’s in Beastdrol v3 and what Muscle Research has to say about it.

But in order to get a clear picture, it helps to what people who’ve used it have to say.

And unfortunately for Beastdrol v3, this is where things start to fall apart.

I did find a few positive reviews scattered around, but most of what’s out there on the bodybuilding forums is that this version just doesn’t compare.

As the FDA continues to ban ingredients that work (for good reason or not) it gets harder and harder to find supplements that do the job you’ve come to expect.

I give them credit for trying, but actually, some of their customers wish they would just own up to the fact that Beastdrol can be no more, instead of trying to pass off this v3 as something just as good as the previous versions.

This guy sums up that feeling with his statement:

“I don’t see any anabolic ingredients in there.

It seems to be missing the good stuff this time around. Dhea is worthless. Especially at 100mg per serving.

Need to take at least 600mg ed would be 6 pills leaving you 15 days worth from tjis bottle.

From someone who has been a mr supps pH customer for years, i am disappointed and insulted by beast3LEAN--0. There jas to be a better way to beat this pH ban.”

Others say they believe it’s helping, but results are slow in coming.

You can pick Beastdrol v3 up online through StrongSupplementShop or the Muscle Research website.

Prices are basically the same through both at $69.99. That’s for a 30 day cycle taken at the recommended dose.

If you’re a die-hard Beastdrol fan, you’re probably going to want to try Beastdrol v3 no matter what.You may get some results if you support your cycle with a solid diet and exercise routine.

But if you are looking for something reminiscent of the old Superdrol days, you will most probably be disappointed.

At $69.99 for 30 days worth of supplements is an awful lot to ask for unless it is truly a miracle supplement, so to speak.

Taking sarm3d for 6th week. Started beastdrolv3 3 weeks ago. Almost immediately I had tennis elbow (tendinitis) on left arm. I dismissed it as a overuse. I have been gentle with it and now my right is hurting equally with no possible over use injury. Any advice? -Corey