Low libido is not a problem many men feel comfortable talking about, but millions of men find themselves struggling with the issue. There are dozens of reason why a man may experience a loss of libido. Sometimes it’s caused by stress, depression, or anxiety, it can be a side effect of certain medications, or it can have a physical cause. 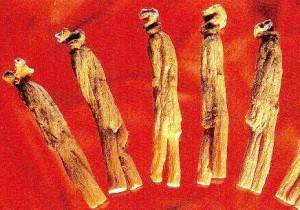 One effective method men use to boost their sex drive is by taking Korean ginseng. What is it and how does it work?

Ginseng is a plant grown in many parts of the world, yet Korean ginseng is most often preferred when striving to strengthen the male sex drive. What makes it different from other ginsengs?

The history of Korean ginseng’s use as a medicinal remedy goes back thousands of years. The name ginseng translates to mean “man plant” in ancient Chinese language because its roots look like the shape of a human. Greeks later added the word “panax” to its title because it means panacea or “cure all” and ginseng was used to treat numerous ailments.

Korean ginseng is still used today to treat a variety of conditions. It is believed to lower cholesterol, regulate blood pressure, balance blood sugar levels, and combat memory loss. It is also quite successful at boosting libido.

There have been clinical studies that prove Korean red ginseng is an effective libido booster.

At the University of Korea, 60% of men who took Korean ginseng in a trial reported a noticeable improvement in their sex drive and in the quality of their erections. They also said that their sexual encounters were more satisfying while using ginseng.

What about Side Effects of Korean Ginseng?

The majority of people do not experience any side effects when consuming ginseng. If taken in large doses, some people report feeling dizzy, nervous, moody, or a loss of appetite. Other side effects may include diarrhea, itching, a change in the rate of heartbeat, and insomnia, but these symptoms are rare. It is possible, however, to have an allergic reaction to ginseng that may produce more severe effects. If you are concerned about the safety of ginseng, discuss its use with your physician.

Loss of libido is a distressing problem for many men. If you are suffering, why not try Korean red ginseng by itself or combined with other natural ingredients in a supplement designed to help you regain your sex drive? Many men who have are now experiencing a much more satisfying love life.

Does Korean ginseng help women with a low libido? -sandra

According to WebMD, it does, especially in women after menopause.- Rob