Have you ever come across this ad?

Sometimes, you are just scrolling through your feed and you see something that stops in your tracks.

That is what happened to me the other morning when I came across the bold headline of the ad in question.

“Kevin Costner Bets Big With New Supplement, Finds Cure For ED & Male Aging Issue” is enough to stop anyone in their tracks. 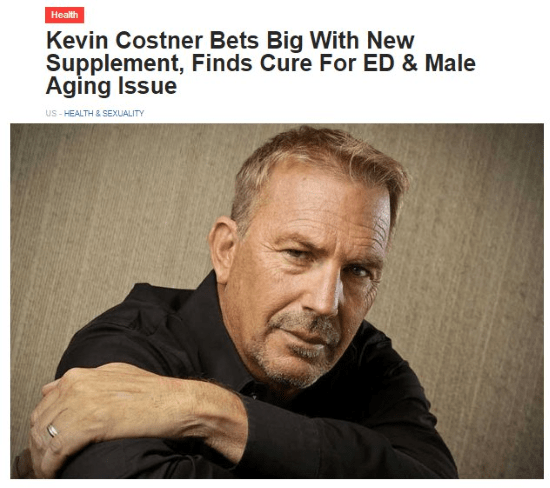 Of course it seemed like quite a stretch and a little bit too good to be true.

But that would not be the first time something that has happened.

I have covered endless cases of ads boasting celebrity endorsements that don’t exactly seem like they are legit, and usually they aren’t.

More and more they pop up and leave as quickly as they came when people catch on that it is totally bogus.

You can find bogus supplement endorsements using the names of endless celebrities ranging from Denzel Washington and Dr. Oz to The Rock and Kevin Costner.

In many ways it has become a common scam that many shady supplement manufacturers employ to drum up sales.

The article refers to a (nonexistent) interview where Kevin Costner states that him and his team of partners created MAX EXTRACT.

Not only that, Kevin himself says that MAX EXTRACT is better than Viagra and other leading ED drugs. 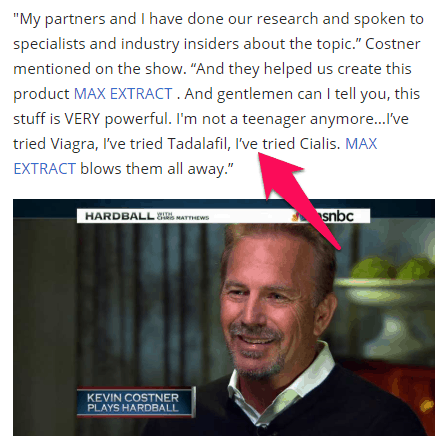 Yes, I know, that seems quite odd.

Why would an A-list actor and producer spend his time, money, and efforts definitely an ED supplement?

I’ll tell you why; he never did.

Of course Kevin Costner is not an ED pill tycoon and allow me to lay it all out for you here.

When you click the ad and it takes you to a website that appears to be GQ, they are trying to bait you with a familiar web entity.

However, it does not take a Sherlock Holmes level detective to figure out that it is not the GQ website.

In fact, it requires no sleuthing at all.

Direct your attention to the URL at the top of the page and you will know right away the site has nothing to do with GQ.

Besides the GQ façade, the first thing you may notice is the pictures taken from a faux MSNBC interview.

If you look up any variation of Kevin Costner promoting an ED pill on Hardball With Chris Matthews, you will find nothing except for this scam article.

That is because it never happened.

He did go on Hardball With Chris Matthews, mind you, but it was to promote his movie “Black or White” back in 2015.

Unless somehow there is footage on the cutting room floor that only the author to this scam ad has access to, Kevin Costner did not breathe a word about erectile dysfunction or supplements of any kind.

It takes a simple google search to figure out they are full of it.

Not only that, but it is the leading point of the whole article.

They come right out citing the “interview” and right before the ridiculous claims that it is “90% cheaper and 5 times more effective” than the competition.

2. What Was That About Jimmy Kimmel?

Kevin Costner has without a doubt been on Jimmy Kimmel’s show.

In fact, he is a repeat guest and his appearances are fun and popular.

Of the many topics they have covered over a few interviews, can you guess what never got discussed?

He shared fun acting anecdotes but never got around to talking about the ED this scam article claims he is associated with.

So, it stands to reason that Jimmy Kimmel Live’s official Twitter account did not tweet that Kevin Costner was backstage getting ready to talk about his new ED pill on the show, right?

After looking through Jimmy Kimmel Live’s old tweets, surprisingly, that one is nowhere to be found.

Not only that, but I could not find one instance of the them using the hashtag #edcure on any of the show’s social media accounts.

And what was that about him promising to provide free MAX EXTRACT for the public on Jimmy Kimmel Live?

If that had actually happened, that would have been awfully generous of Mr. Costner.

But sadly, nope, he just went on there to promote his latest movie and not an ED supplement that he has zero relation to.

All that you have to do is head to YouTube and you will find a few Kevin Costner Jimmy Kimmel Live appearances to see for yourself.

3. The Link That Leads to Nowhere

You probably noticed the several links to MAX EXTRACT scattered throughout the bogus article.

Well, clicking on doesn’t do much of anything.

Instead, you’ll be directed to a page telling you that it cannot be found.

Hey, maybe that is just because they have a new website and the unbiased “author” of the silly ad was not aware.

When you google MAX EXTRACT, however, you can find maxextract.net.

That does not make things any less sketchy, however.

When you click “buy’, you are taken to a buy page, but not one for MAX EXTRACT.

Instead, you land on a page prompting you to buy Apex Alpha Testosterone.

With supplements that have scamming tendencies, that can usually point to a couple different things.

The first one is that manufacturer has to shut down their brand because it got negative feedback or outed as a scam.

The second reason is that either it was discovered to have undisclosed ingredients or simply that the parent company moved onto the next scam.

There is no telling which is the case in this instance, but one thing is for sure; everything surrounding it is a muddled mess.

What leads me to believe that it is discontinued is that you can find it on a few random supplement websites but not on its own.

All of the language and tactics surrounding MAX EXTRACT is eerily reminiscent of similar scams and should be more than enough to get anyone to stay away.

And the absolute LAST thing I would do is jump at the chance to do a “free trial” associated with anything even remotely connected to this product.

If only Kevin Costner knew what a silly scam his name has been attached to.

I’m guessing he knows what MAX EXTRACT knows, which is that what they are doing is illegal.

Either way, MAX EXTRACT clearly does not seem to care about tarnishing their reputation or getting in trouble because they did absolutely nothing to try to be even remotely convincing that it was a legitimate product.

Why Go to Such Trouble to Scam People?

Simply put, they are just trying to make a quick buck.

And realistically, they are not even trying that hard.

It is so easy to see through their façade that just about anybody could glance at the faux article and determine something was amiss.

The reason that they went about it the way that they did is the same as many other shady brands.

All that they are doing is playing on the fact that people know and enjoy Kevin Costner’s work, and using that to piggyback a shady ED pill onto his name to get you to part with your dollars.

That is also why they refer to Jimmy Kimmel Live and Hardball With Chris Matthews.

Those are popular TV shows and something many people relate to.

It creates familiarity with the reader and that combined with GQ can sell someone that is not paying full attention to it.

That is not the only way that they are trying to appeal to you using shady tactics.

Look no further than the laughable “comments” (yeah, right) section at the bottom of the scam page.

There are plenty of comments at the bottom saying only the most positive things possible with time signature of 12 minutes ago, 25 minutes ago, etc. etc.

Interestingly enough however, that never seems to change.

Go back and visit the scam article in question at a later time.

The times won’t be any different.

They are either paid testimonials or more likely, just fake accounts made by the same uncreative scammer who wrote the base article.

I mean, really, how does one of the “customers” in the comments have a discount code that she can offer up for future customers?

Now, I hope you see what you can do to easily pick a scam article apart.

The biggest lesson to learn from all of this is that shady people will do anything to make a quick buck.

They will go so far as to emulate established entities, falsely claim celebrity endorsements, and create false narratives.

As long as you can take a step back when something seems to good to be true you will realize that in most cases, it is.

The last thing that you want is to fall victim to a company that is so shady that they could only get your attention with silly lies.