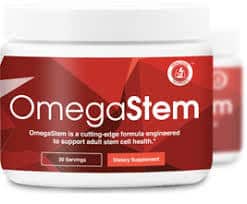 Home » Other » Omega Stem Review – 1 BIG Reason to Try It

I don’t know a single person who looks forward to the decline in their mental and physical abilities that inevitably occurs as we get older.

Related Article: Panaxcea (Panexitrol) Review – Should You Try It?

But what if there were something you could do about it?

Of course, we all know eating right, getting regular exercise, and avoiding harmful lifestyle choices can help.

But these are not immediately transformative in the kind of way that would capture widespread attention and be viewed as a miracle cure.

This is where Omega Stem comes in.

It’s an anti-aging supplement from Princeton Nutrients that claims to unlock the secret to the kind of cell repair that can keep you looking, feeling, and acting younger.

Now who wouldn’t want the benefits of something like this?

According to some of the marketing for Omega Stem, it has made a paralyzed women walk and gave a headed for has-been status quarterback the best season of his life.

But it pays to be a skeptic sometimes, and when a product makes bold claims like these, it definitely warrants looking into.

What is Omega Stem?

There’s an “article” floating around the internet, talking about how there’s a secret formula, previously only available to the rich and famous, that’s just now being made available to the general public.

As a side note, the article says they can’t legally use the superstar quarterback’s name, but they make it clear who he is by posting a photo of him in his #18 Denver Broncos Jersey. 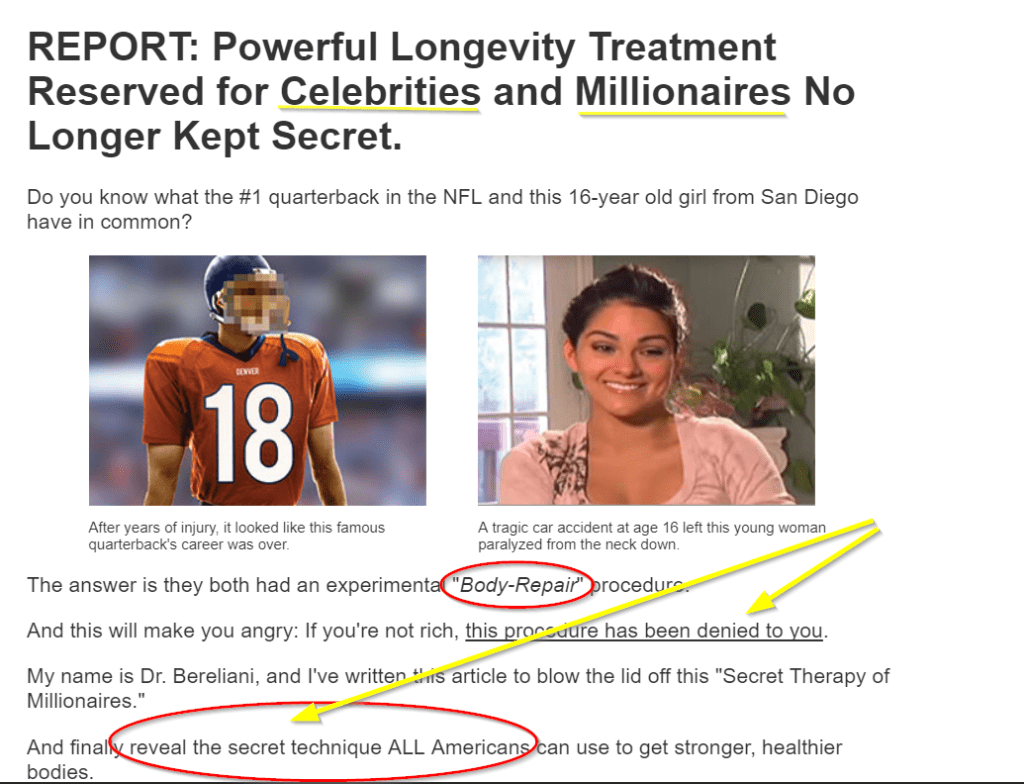 The secret also helped Laura Dominguez, paralyzed from the neck down at 16, who after treatment has experienced significant spinal cord repair and reports a level of feeling she didn’t have before.

She continues her recovery today and vows to walk again one day.

Both these stories are at least loosely based in fact.

Laura Dominguez did go to Portugal to receive a transplant of stem cells from her olfactory sinus to her spine.

And they each demonstrated great improvement in their conditions post treatment.

Where the story breaks down when it tries to draw a parallel between the procedures used on Manning and Dominguez and the way Omega Stem Works.

They had transplant procedures where stem cells from one part of their bodies were injected into other parts of their bodies. The advanced science and technology are truly amazing and inspiring, but this is not what happens when you take Omega Stem

Let’s dive into this a little further.

While the article spends most of its time talking about the more complicated and expensive stem cell treatment used by celebrities and the wealthy, at the very end, it shifts gears to discuss how Omega Stem works.

Basically, after touting the truly admirable advances in medical technology, the writer – Dr. Bereliani of the American Academy of Anti-Aging Medicine and Princeton Nutrients– seamlessly shifts the discussion to the idea that boosting your body’s own natural production of stem cells might have the same effect. 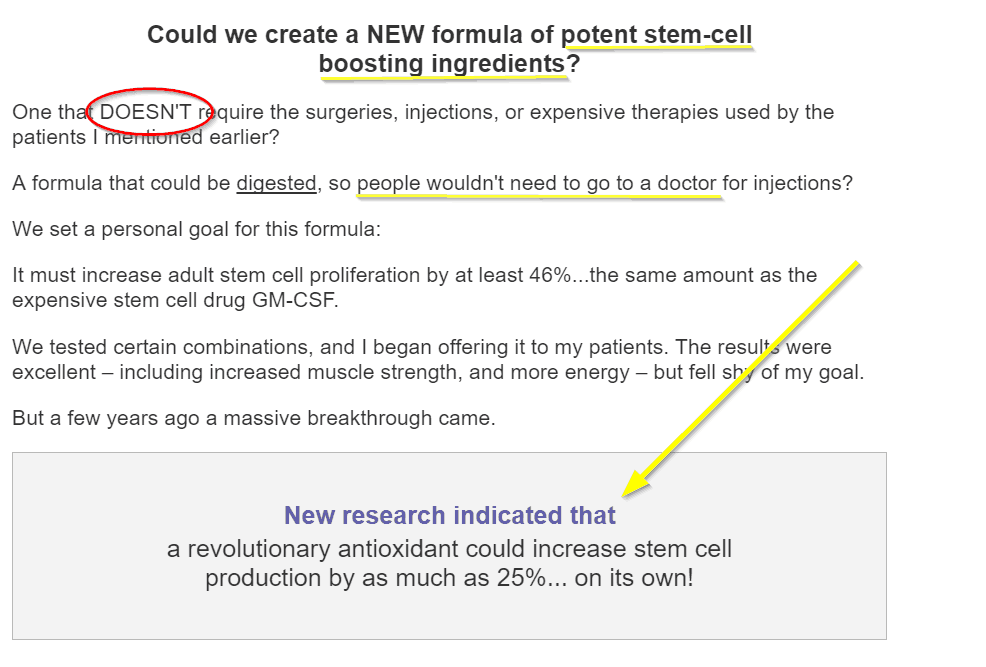 So while Manning and Dominguez were successfully treated with surgeries involving adult stem cells, their procedures are being used to support the theory that taking a pill will give you the same results?

That’s basically what they’re trying to say here, that when you take Omega Stem, your body will produce more stem cells naturally, and you’ll have regenerative results, much like Peyton Manning and Laura Dominguez.

Of course this is marketing and this is how marketing works.

Princeton Nutrients wants to illustrate what it believes their pill can do.

Since the pill is designed to increase the amount of adult stem cells in your body in order to promote health, rejuvenation, and longevity, they use the astounding results of “related” stem cell procedures to promote the idea.

But it does illustrate the point Princeton Nutrients is trying to make, that increasing the number of stem cells in your body can yield impressive results in the area of tissue regeneration, which can lead to some of the anti-aging effects you want.

The idea is that by increasing the proliferation of adult stem cells in your body, all your bodily tissue will be better able to heal and renew itself.Some of the results reported by users after only 2 weeks of use include:

These are impressive benefits to be sure.

Since Omega Stem is in fact a pill and not a surgical procedure, let’s take a look at the formula Omega Stem uses to achieve them.

There are 5 ingredients in the Omega Stem formula:

How To Use Omega Stem

Omega Stem comes in the form of a powder.

Mix one scoop with a 16 ounce glass of water and drink it first thing in the morning on an empty stomach.

Omega Stem is not available in stores.

A this time, you can only purchase it through the official Princeton Nutrients website.

There’s a 90-day money back guarantee on your purchase of Omega Stem.Their customer service number is listed several times on the website and they have an “A” rating from the Better Business Bureau.

For these reasons, I feel comfortable assuming they’re a trustworthy company and not likely to give you the runaround when you call for a refund.

On the face of it, research into how stem cells can help slow the aging process and even cure disease is extremely exciting.

But ultimately I think it’s too much of a leap to think that ingesting a couple amino acids, a vitamin, and some antioxidants will cause you to have more stem cells.

The science just doesn’t back it up at this point.

If there were even a handful of independent studies that pointed to this formula and combination yielding the kind of results such as increased stem cells that Omega Stem claims, then maybe I would put more faith in it and buy into what it has to offer, but the fact of the matter is that there is nothing to suggest that it is the case.

On the other hand, you may reap some health benefits from the ingredients in the formula.

If you’re looking for something to help with more energy and perhaps vitality, Omega Stem may work for you.

If not, you can always return it for a refund.

Be sure to come back and let us know which side you landed on.

Have You Used Omega Stem? Leave Your Review Below!

No way to tell

Used it for 180 days. Went off for 180 days.  Have now tried again for 90 days. Cannot detect any difference, Guess I will have yo go on faith.  I am an 85 year old healthy male, physiologically a lot younger than most contemporaries that I meet - could be a connection??

How long can you take the omega stem? -LourdesLourdes Heussner

There's no need to cycle it. You can take it indefinitely.- Rob

Have you thought about trying the omegastem and telling us how you personally felt after 90 days, I trust your opinion. It would add to your reviews I believe. And no I don’t work for them haha -Allison

Because I try so many supplements, it's very hard for me to stick with one for 90 days.- Rob