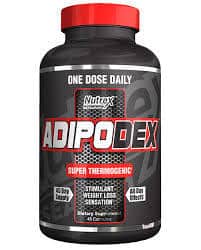 Adipodex is fat burner made by Nutrex Research. Most of their fat burners are in their Lipo-6 line of products, but they’ve chosen to keep this new entry
separate.

Word on the street is that this once-per-day pill pack a punch, and it’s getting quite a lot of buzz, so we decided to have a look.

The idea behind Adipodex is that it takes a whole new approach – using a unique ingredient – to provide the thermogenic burn you need, that clean, long-
lasting energy you want, and the appetite suppression that’ll keep you on track with your program, all the way to success.

It’s so strong, in fact, that
Nutrex recommends you cycle it 3 days on 1 day off just to keep Adipodex at its highest level of effectiveness.

And if the reviews mean anything at all, it
really is powerful stuff. 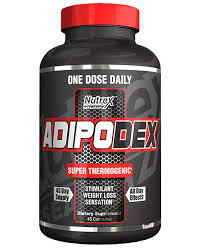 Adipodex Ingredients and How They Work

Adipodex is very heavy on stimulants in their propreitary formula.

So there it is.

The recommended dose is 1 Adipodexpill in the morning, and they strongly discourage you from taking
more than 1 capsule in a 24 hour period.

They also recommend that you take it for 3 days then take one day off.

Or alternate days with one of their Lipo-6
products.

This is probably due to the AMP Citrate which is thought to build a tolerance very quickly.

You can purchase Adipodex online through Nutrex Research and some other retailers.

The 45-count bottle sells for $49.95 on the Nutrex website, but about half
that if you go through Amazon.

The ingredient AMP Citrate has been banned by the FDA, so Adipodex has been taken off the shelves.Here’s a link to the letter sent to Nutrex from the FDA,declaring that AMP Citrate is not an acceptable supplement ingredient.

Adipodex is definitely not for the faint hearted.

I guess there’s little question that it gives you energy and suppresses your appetite, but the sheer amount
of stimulants if probably too much for a lot of people.

If you choose to try it, make sure you don’t take more than the recommended dose, and discontinue use
if you feel to hyped up or jittery.