When I went to check the mail last week down at our clubhouse, as soon as I opened up the mailbox this fell out. 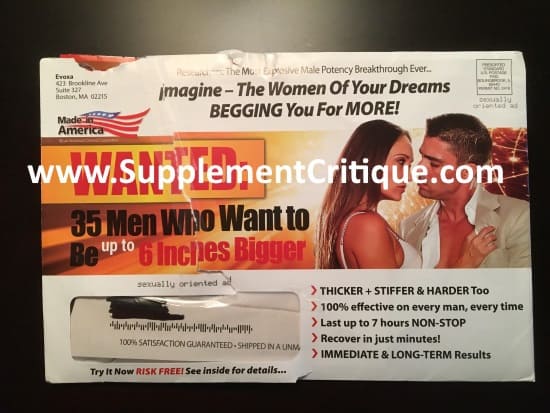 Normally I just throw these letters away, but since no one was around I decided to open it up and take a look.

It had pics of huge d#$ks, hot women getting nailed in the rear, and of course it wouldn’t be complete without a doctor standing in a white coat with his arms crossed and a stethoscope over his shoulder.

Apparently there’s been a revolutionary breakthrough in male enhancement technology, one that will make you stiffer, harder, thicker, and wider, INSTANTLY.

The name of this product is none other than Evoxa.

So does this shit really work, or is it all just B.S.

Well you’re about to find out, read our comprehensive review below:

What is Evoxa Male Enhancement?

According to the pamphlet that I’m reading, Evoxa is the European secret to turning every man, age 18 – 108, into a chick magnet.

You see, girls don’t care about things like money, cars, flashy jewelry, or a big house.

They crave one thing and one thing only, a BIG c#$k.

At least that’s what they’re telling me here. 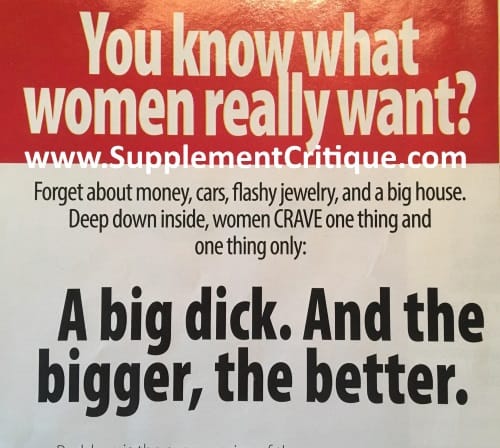 I can tell you from my 36 years of experience dating women that there is some truth to that.

The apparent benefits of Evoxa are vast, and include:

That last part intrigued me…

Were they saying that this was a “cure” for ED?

Am I going to get permanent size gains from taking Evoxa?

Who is Pierre LeFleur?

There’s a lot of mentions of a guy named Pierre LeFleur, who is the guy dressed up in the doctors costume.

However, when I did a little digging, unfortunately it’s a bit of a mystery. I tried several google searches trying to find out who this Pierre LeFleur guy is, and came up short.

When I tried searching his name straight up, Google kept asking me if I meant to search for “Pierre LaFleur”. 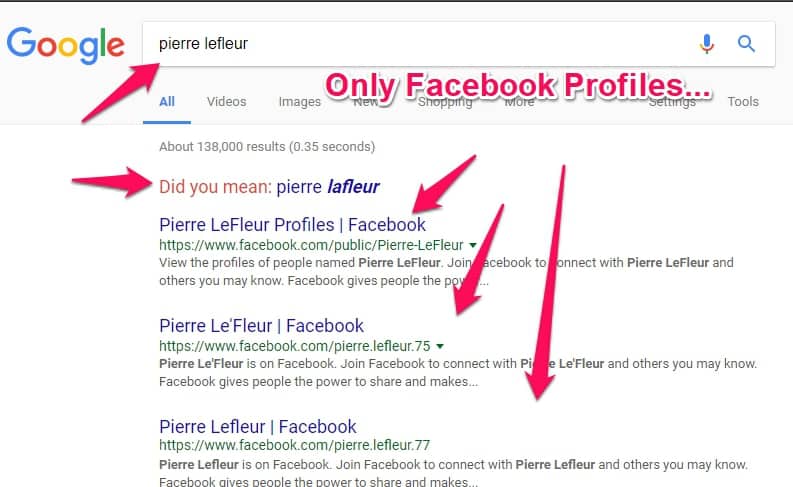 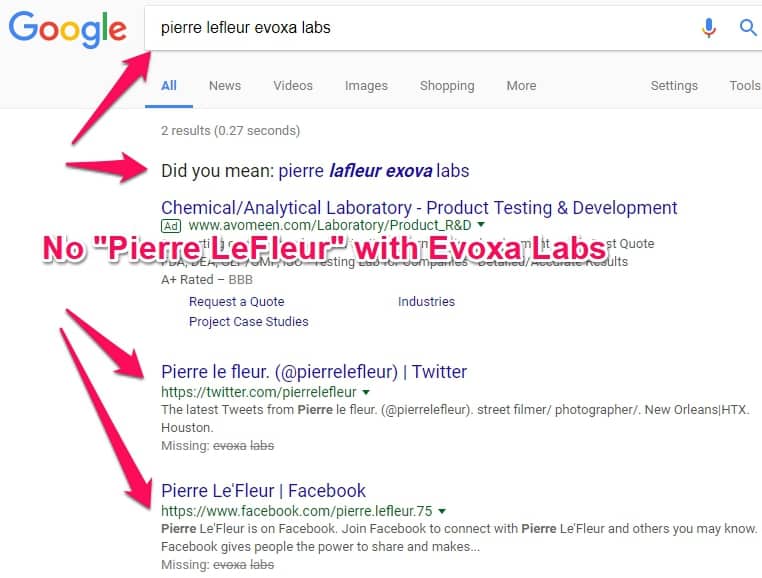 So who is this “Pierre LeFleur”, and why is he so special.

Well, they cite him several times throughout the pamphlet.

While they don’t address him as a “Dr.”, they sure allude to the fact that he is with that white lab coat he’s wearing.

Something was strange about this photo. It looked, familiar….

I did a little digging, and with absolutely no surprise at all, this supposed “dr.” is simply a stock photo. 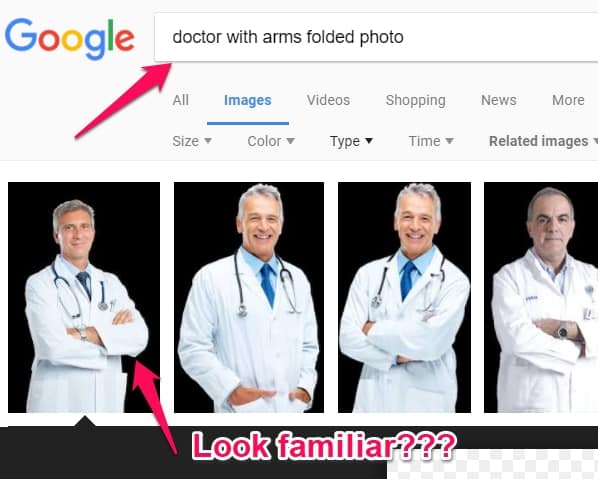 My guess is this “Pierre LeFleur” doesn’t really exist, they just made it up to add credibility to Evoxa.

What about the reviews?

I searched far and wide for credible Evoxa reviews online, but unfortunately came up short.

There are literally 2 websites talking about it, and to be honest I wouldn’t trust a thing either one of them say. 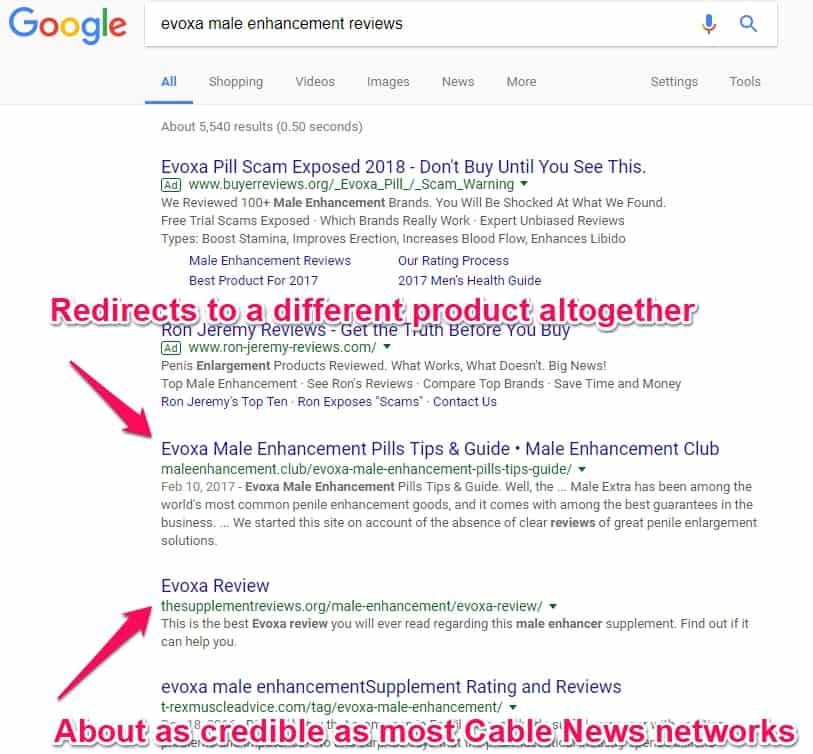 The first one doesn’t even talk about Evoxa, it actually just redirects to a totally different supplement.

The second one, let’s just say has about as much credibility as your average cable news network.

Really the only reviews we could find for this supplement were on the back page of the pamphlet, and they read like this:

“It’s amazing. Here I am, an ordinary guy suddenly transformed into a sexual dynamo.

The first week I tried Evoxa male enhancement, I had a different girl in the sack every night. Not bad for a 59-year old, huh?”
B.T., Austin, Texas

“Who wants to slow down in the bedroom? But, like most guys, you do or you soon will! This stuff not only stops you from slowing down, it makes you the biggest guy on the block! Thanks Evoxa!”
D.W.

“I’ve suffered from soft erections for most of my life. I tried just about every male potency product there ever was and they were all rip-offs. Nothing worked. Then, my friend suggested that I give Evoxa male enhancement a try. In just a few days, it completely changed my life. I have big hard erections now and the ladies are loving it.”
T.A. Las Vegas, Nevada

“When you’re married as long as me (57 years), sex is a once in a while kind of thing. Evoxa changed all that. My wife and I made love like it was the first time! Last night, we climaxed SEVEN times! We’re both in a state of shock, but nobody’s complaining!
W.P Buffalo, New York

Most of these reviews just talk about how well their performance went up, but one guy noted a MASSIVE increase in size.

“This stuff is like nitroglycerine for your penis. A few days after trying Evoxa it was like an explosion in my groin. My penis just erupted. I couldn’t believe it! I had this swagger about me that no woman could resist. I’ve had more sex in the last 6 months than in the last 20 years. Thanks LeFleur, you’re a genius!”
T.S.

Of course, there’s really no WAY to independently verify the authenticity of these reviews, but that’s all we have at this time.

Frequently Asked Questions (as reported by them)

The simple answer, according to them, is that it just works. They correctly note that there are a TON of very UN-satisfying products on the market that by and large don’t work.

I know this, because I’ve tested a good percentage of them.

Will it grow your penis? And if so, by how much?

This is a direct quote from the brochure:

Every man has a limit of how big he can be. Evoxa increases penis size at LEAST 6″. But some men may grow 6.5″ or even 7″ bigger. However big you end up, be assured that Evoxa is completely safe.”

Those are some pretty bold claims, and certainly not the first time I’ve heard them.

In my personal experience testing these supplements out, 100% of them that claim any sort of size gain don’t deliver.

At least on their own.

However, you do have some options (more on that later).

As of this review, the only place I’m seeing this for sale is via mail order form or over the phone.

How much should you buy?

Well, that all depends on how big you want to get? (according to them at least)

If you want a 15-inch penis, buy a year supply for only….well, you get the point.

They essentially allude to the point that, the more Evoxa male enhancement you take, the bigger you’ll get.

It’s literally that simple. (or is it?)

Don’t buy into the hype, fellas.

It’s all complete and utter non-sense.

I’ve been testing these supplements for close to 10 years now, and not ONE of them that claimed size gains ended up living up to their promises.

If you’re looking for TRUE size gains, you have a few options:

#1: Use a water based pump called the Bathmate. I have a VERY extensive review on it, check it out here.

#2: Use an extender device called the Phallosan Forte. I’ve used about a dozen extenders over the years, and the Phallosan was by FAR the most comfortable (and effective).

You can read my review of that one here.

#: Perform penis enlargement exercises with your hands. I’ve been doing PE exercises for years now, and I can tell you from experience that they REALLY do work.

You just need to be committed to doing them.

If you are just looking for something to help you in the sack, I would recommend you use either a supplement called Vigrx Plus, or a pill called Hardon Helper.

They are 2 of the most EFFECTIVE supplements I’ve ever used, and I’ve used a lot.

I won’t get into the nitty gritty details about each of them here, but you can check out my reviews for a more in depth report.

As always, if you have any specific questions, I’m here to help!

Have You Used Evoxa Male Enhancement? Leave Your Review Below!