When a new weight loss product first hits the market, it’s tough to tell whether it’ll really catch on or just fizzle out.

One way supplement producers have tried to ensure success in the recent past is by getting a celebrity on board.

Over the last decade or more, the hottest celebrity you could get in the weight loss business was Dr. Oz.

If you could get him to push your product, you could pretty much take his endorsement to the bank.

Maybe Dr. Oz is nothing but a shill.

After all, he did get called before a Senate Committee for potentially making false claims about products he promotes.

But whether you believe him or not, he has a lot of influence over what sells and what doesn’t.

So, with Dr. Oz pushing its primary ingredient, we’re looking at ForskolinFit Pro today.It’s been advertising all over the internet lately.

You’ve probably seen it on your Twitter or Facebook feeds. It looks amazing, but does it work? Will it take the weight off? Are there side effects? What about the company?

We looked at all of it, so read on for the answers.

What is ForskolinFit Pro?

ForskolinFit Pro is a natural weight loss supplement that contains only one active ingredient – Forskolin.

We’ll get into more detail about what that is a little later.

For now, let’s talk about what it promises to do for you.

ForskolinFit Pro is said to help you burn fat and lose weight.According to its official website, it works like a vicious, fat burning cycle: 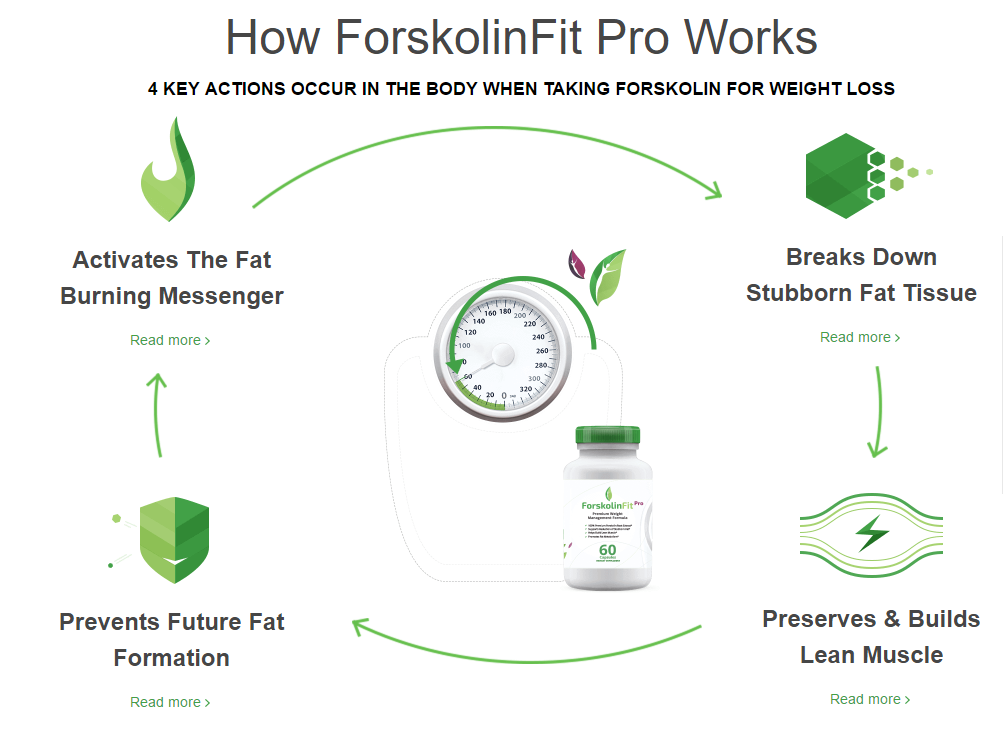 Here’s how the steps work:

According to ForskolinFit Pro, that’s it, that’s how it works.

The only active ingredient in the ForskolinFit Pro formula is 250 mg of 20% forskolin.Forskolin comes from the root of the Coleus Forskohlii plant, a member of the mint family.

Like a lot of herbal ingredients, it’s been used in Eastern medicine for centuries, in this case for asthma and heart disease.

But once its potential effect on weight was discovered, this little known herb became the belle of the ball.

When Dr Oz talks about Forskolin, he cites a double-blind placebo controlled study as evidence that this stuff helps you lose weight.

The funny thing is, even though it’s true that there was a study that fits this criteria, the results were very different than what Dr Oz would have you believe.

First of all, the study was extremely small.There were 30 obese men participating over a 12 week time period, 15 used Forskolin (250mg twice a day at 10% concentration) while 15 took a placebo.

Second of all, the men in the study did not lose weight.

They did experience a favorable change in body composition however.

Their lean muscle mass increased in comparison to body fat. This is a good thing.

But it’s not weight loss. Free testosterone levels were also increased.This small study is perhaps promising, but it’s not evidence that Forskolin is a magic weight loss elixir.

Interestingly, there was a another small study involving only women where no weight loss or body composition changes were noted.

What was noted was that the women taking Forskolin didn’t gain weight.

Again, good but not weight loss and not a miracle.

It should also be noted that in the “successful” study, the dose used was 250 mg Forskolin at 10% taken twice a day.

The dose in ForskolinFit Pro is 250 mg Forskolin at 20% taken once per day.

It may seem like it works out the same, but that’s not how ingesting substances works.

If you’re not following the same protocol as a study, then you really have no idea if you’ll even get the close to the cited results.

Forskolin is generally considered safe when taken by adults orally.

According to WebMd, the only known side effects occur when taking Forskolin in other ways.

When taken intravenously, low blood pressure and flushing can occur.

When inhaled, throat irritation, cough, tremors, and restlessness can occur, and when given as eye drops (as a potential treatment for glaucoma), it can cause stinging.

Oh boy, here we go. This is another free trial scam product.

You see the little pop up ad at the side of your laptop screen, you click it, and you find the weight loss miracle pill you’ve been searching for.

You read on and find out it’s FREE, and you’re in!

Hold on a minute though, don’t go there. 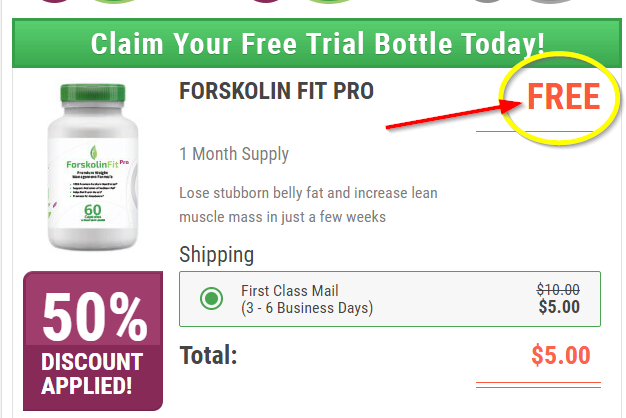 Well hold on just a minute.

When it sounds too good to be true, it probably is, and that’s definitely the case here. ForskolinFit Pro is not free.

If you sign up for the free trial, you are really signing up for the monthly autopay program.

They make you pay $5 in shipping just so they can get your credit card number, and once they have it, they will use it.

Here are the terms, hidden way at the bottom in fine and light gray print:

If you don’t want an ongoing subscription with autopay, you need to call and cancel within 15 days of the day you placed your order.Now I don’t know about you, but that doesn’t sound free to me. This free trial is the only way to order ForskolinFit Pro.They’re not really interested in reaching out to a broad base of customers.

They’re more about the quick buck – get in, get out, get their money, and move on.

Don’t feel bad if you missed it.

They use this business model because it works.

I’ve heard from hundreds of guys who’ve been taken in by these fake free trial offers.

Because ForskolinFit Pro is only sold through their website, most of the customer feedback we found is there.

But I always advise readers to take these with a grain of salt since the company is trying to put their best foot forward and probably not willing to publish anything negative. 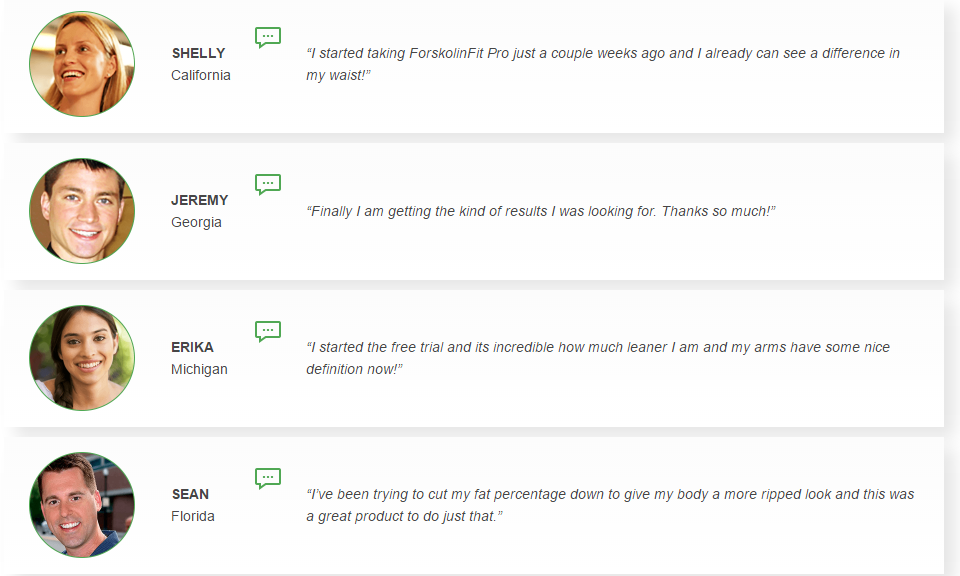 We did find another source of feedback, and it told a completely different story.

This website has collected feedback about ForskolinFit Pro independently and here’s some of what these people had to say:

Lots of negative feedback about the company, so we went and checked them out at the Better Business Bureau website, and if you thought it was bad already, hold on because it gets much worse.

Here are just a couple of the numerous complaints: 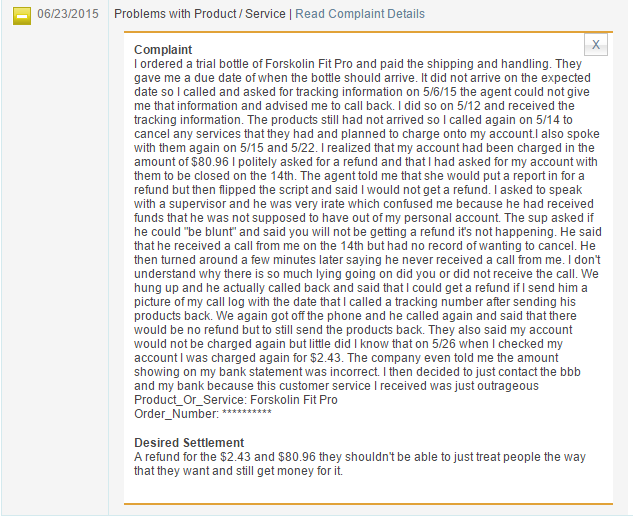 They are not accredited and they don’t have a rating, but there is a note on the page saying that the company is out of business.

They came to this conclusion because they are unable to reach them. This may or may not be the case.

You can still place orders through their website, so I think the “out of business” designation is a bit premature.

But judging from the complaints and the fact that each and every one of them has gone unanswered, I’d say it won’t be long before they do go out of business.

There are some good effective supplements out there. Believe me, I use some of them. But there’s a lot of junk too.

Here are some of the big highlights putting ForskolinFit Pro in the junk category:

It’s pretty hard to dispute those reasons to stay away.

Believe me, I’d give you the positives if I saw any. ForskolinFit Pro is likely to be safe. That’s a positive. Unfortunately, it’s the only one.

There’s really no reason to buy or try ForskolinFit Pro.By reading this review, you’ve given it all the time and attention it deserves.

Have You Used ForskolinFit Pro?