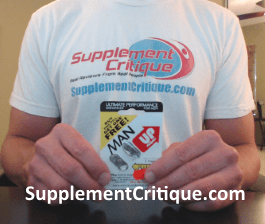 Our initial research into the Man Up Now male enhancement formula turned up several press releases from December of 2010. These were all about the product being tagged by the FDA as a formula to avoid due to the presence of some potentially dangerous ingredients.

This is a common practice among over the counter supplements that are trying to drum up business by giving users results that are stronger than their competitors so they use prescription strength erectile dysfunction drugs to get one over on their peers but this is a dangerous game and can lead to severe health problems for unsuspecting customers on heart medications.

How Man Up Now Works

Though the manufacturer of the product, Synergy Distribution LLC, insists that man up now is herbal and all natural, it was discovered that this is not the case.

The FDA labs tested the formula and learned that it contains sulfoaildenafil, which is a chemical similar to sildenafil, the active ingredient in Viagra. This is a prescription only substance due to the negative effects it might have on the individual’s blood pressure and heart rate.

At best, someone who shouldn’t take the substance will be dizzy, but at the worst it can lead to dangerously low blood pressure. 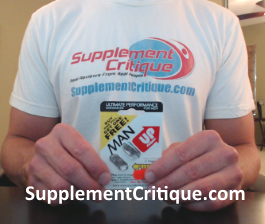 This is something that is found quite widely on the Internet, regardless of the notices of concern and risk.

None of the locations we found have any sort of guarantees or refund options available.

As you might imagine, we have really only negative comments to offer on this particular product due to its lack of safety and disclosure.

The standard price for a single package of three pills is approximately $9.75. There are no guarantees from any of the vendors or from the manufacturer.

Anything that has been found to contain a prescription based substance, but which does not have the clearance to do so, is not going to get a positive review from us.This product may be able to boast of providing quick and powerful erections, but when it runs the risk of harming the man using it, then we must give it a solid “thumbs down”.

The manufacturer must really make the formula entirely “herbal” if it wants to continue to market it in this way, and they must remove the pharmaceutical compounds that can lead the buyer of the formula to harm.

Have You Used Man Up Now? Leave Your Review Below!

I bought a pack on Saturday. Consisted of two pills about ?5.99 was the cost. $3 a pill.  Pretty steep but I was willing to give it a try. I've tried some other items and have not had much luck with them.  So I figured WTF. I was glad to see that it didn't contain yohimbe with for me is a no go.  Heartbeats unreal with that ingredient.

However I did not recognize the ingredients in the product, but I have had many troubles with keeping an erection after ejaculations so I figured I had nothing to lose.

Tried it out Saturday took one pill within 20 mihtues I could feel the effects of it. I could literally feel the blood the pressure directly in my penis.  It's a constant pressure that gives you the notion that something is working.

It doesn't make you hard or make you erect your partner will factor in in that regard but as far as recovery after erection it did its job.

Look I've tried a lot of shit. Nothing I've tried had cone close to this.

Bottom line it is working.

Absolutely no side effects whatsoever.  No stomach pains, none of that headache or throbbing feelings I've heard some pills give. No nausea, no erratic heartbeating.

Honestly ad much trouble I've had keeping it up after and erection to finally find something that does what this does and i don't have to take it everyday either.  This is some magical shit.

I don't feel any side effects whatsoever.

Besides a constant erection the fact that it has no side effects (at least none for me) is a huge plus.

I recommend it despite the risks.

People take far more worse shit than this everyday of their life and they function even in high level roles, jobs, whatever.

I'm not gonna let a few risks deter me away from it. I'm sure there is worse shit in Viagra, Cialis, and other pharmaceutical enhancers than what's in this pill.

Sorry for the long book I just wrote on this product but if you've been looking for something that works and haven't found it you might have now.

I recommend it it highly and unless I actually feel side effects I will continue to use it on a as need basis.

Man Up is a waste of money! The pills don’t work, even if you take them both.  You should stop selling them.

Honesty dictates, or in this case dick-tates, I give it at least three stars because the product does do what it says it will. I took it and 37 minutes later had an erection worthy of penetrating concrete.  I had sex with it more than once and stayed inside ten minutes after intromission following about the same duration of the foreplay while fully erect.

I won't use it again and cannot recommend it to anyone else because the FDA tested it and found it to contain sulfoaildenafil. Sulfoaildenafil is a chemical pharmaceutical analog of sildenafil.  Sildenafil has been tested and found safe and effective. Sulfoaildenafil has not even been tested so it can't be called safe.  Having experience with sildenafil, both Viagra and Revatio, and their newer generics, and other prescription PDE 5 inhibitors when I took Man Up Now I thought, 'This feels an awful lot like Viagra.' I was right, it feels like Viagra because it has an analog of sildenafil which is the active ingredient in Viagra and Revatio both. I suspected Viagra/sildenafil as opposed to Cialis or anything containing tadalafil because my erect penis is slightly more firm with sildenafil than tadalafil.  I've had intercourse enough, and certainly played with my penis enough ??? to know the effects of the available pharmaceuticals! Man Up Now works, but why it works is because it contains an ingredient that is not only unlisted anywhere on the package or product information, it's untested as well.  Continuous usage, which men aren't exactly unknown for with penis pills, may well not be safe. Yes it works, no I can't recommend it.  You could take it for years and be OK, or you could take it for weeks and be waiting on the coroner to make a house call. What amazes me is there seems to be a lot of Man Up Now pills still available all over the country, and I travel frequently.  There's better, less expensive, and a whole lot healthier hard erection pills out there. Go find them.  Ask your doctor. Hell I got three penis doctors & I'm not a wealthy man!

My dick is about 7 inches soft, and I'd like to know if it will make my dick grown any more? I don't need a bigger dick and my wife is okay with my 9 inches when erect. If I get any bigger, it will cause problems for us. Currently, if I try to go deep inside her, it's painful for her. I just want to last a little longer. Will this help? -Tom R.

A pill will not increase the size your actual size. It may make your erection bigger, though.- Rob

What do I do I'm overdosing -Michael

Drink water, get some rest, and discontinue use. If symptoms persist, see your doctor.- Rob

Is it dangerous to take 3 man up pills? Will it make you sick? Is it fatal? -Jay

It's tough to tell exactly what effects it will have since it's known to contain undisclosed ingredients. It probably contains the same active ingredient as Viagra, meaning taking it as directed is probably best, but 3 shouldn't be fatal.- Rob