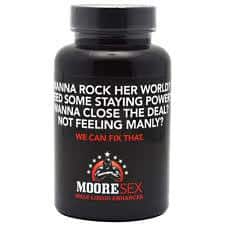 Most of what they make is for improving bodies, but for MooreSex Male they ventured into the sexual enhancement world.

The marketing angle is that Adam J Moore knows how to make a supplement, so if better sex is what you’re after, this is the supplement you need.

The benefits promised by MooreSex Male are stated a little differently than they are for most other enhancement supplements, but they are essentially the same.

They promise that by taking MooreSex Male, you’ll: 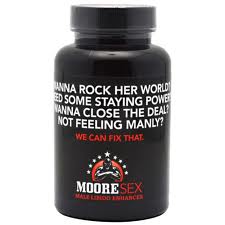 MooreSex Male Ingredients and How They Work

Of course what’s really important is what’s in the MooreSex Male formula, so let’s take a look.

It’s a proprietary combination of:

It also includes a significant amount of Niacin which is an additional ingredient to improve the flow of blood throughout your body.

They offer a MooreSex Female product for women as well.

You can purchase MooreSex Male through the MooreMuscle website and a few other online supplement retailers.

The one month supply sells for $44.99 at MooreMuscle, and it’s actually more expensive elsewhere, so I would stick with the official site.

MooreSex Male looks like most other male enhancement formulas.You’ll get some results, but I don’t find anything particularly special to recommend it.

I would be more willing to if there were more customer reviews, ingredient amounts, and/or some clinical studies.

Have You Used MooreSex Male?