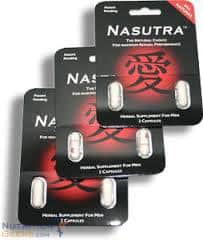 The story is not uncommon. With millions of men suffering with varying degrees of erectile dysfunction, hundreds of supplement makers flock to the rescue. Most of these are reputable companies that are honest about what goes into their products. But some prefer to take shortcuts. And some get caught.

Nasutra Ingredients and How They Work

Nasutra was introduced in 2003 and quickly became quite popular. Its hook was that it used 10 ancient Chinese herbal ingredients known for centuries to improve male sexual functioning. The listed ingredients included:

Nasutra was fast actingand long lasting. The recommended dose was just one capsule about 30 minutes before sexual activity.

If you look for Nasutra reviews and discussions by guys who used it, you’ll find lots of people praising Nasutra for how well it worked.

I suppose this is probably why it got so popular in the first place. But you’ll also see lots of mentions of stuffiness and blurred vision, similar to the side effects you expect to get from Viagra.

In September of 2006, Nasutra issued a voluntary recall of their product because of what the FDA found in a random test of two separate batches. They found a derivative of Sildenafil, which is the active ingredient in Viagra. Sildenafil is a regulated substance that requires a prescription mainly because of its potentially dangerous interaction with certain medications. By requiring a prescription, it can be assured that patients and their doctors are aware of all the potential problems and whether or not they apply. By secretly including such substances in Nasutra, they were risking the health of their customers. Nasutra was subsequently taken off the market.

It appears as though Nasutramay be trying to make a comeback with a new product of the same name. Interestingly, they don’t list the ingredients.

Because Nasutra broke the trust with their customers and put some of them at risk, it’s difficult to believe that they won’t do it again. Add in the fact that there are so many good companies offering effective products, and I see no reason to go back to Nasutra.

Have You Used Nasutra?