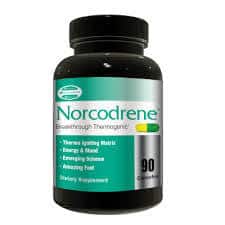 PES stands for Physique Enhancing Science and they’ve developed quite a loyal following.

They’re highly focused on research and development and are always looking for the next, newest, and greatest thing.

So when they came out with their first stimulant-based thermogenic, Norcodrene, let’s just say they had a ready group of people chomping at the bit to try it.

The word that came back is pretty exciting.

Almost to a man, they say its appetite suppression is phenomenal and the way it makes you feel is second to none.

I have to admit, we were intrigued.

Here’s what PES says about Norcodrene.

Its focus is entirely on feel, energy and thermogenesis.

They call it a Thermogenic Igniting Matrix that doesn’t feel or act like anything you’ve tried.

And judging from the reviews I’ve seen, they may have hit their mark.

Here’s just some of the things people are saying:

Norcodrene Ingredients and How They Work 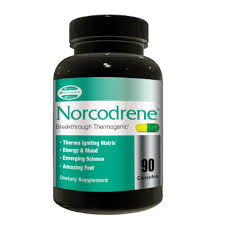 The Norcodrene formula is divided into 2 proprietary blends.

There’s the TGR5a-Infused Matrix and the Thermo Energy Matrix.

Legally, companies don’t have to give the exact make up of these “proprietary blends” but here’s what we know about them both:

I will admit, I was a little thrown by the ingredients list when I first saw it.

First of all, I am generally hesitant to trust proprietary blends.

Second, many of the ingredients are a little obscure or exist in patented forms. After doing some research, though, the formula seems extremely solid and I found myself wondering why I haven’t seen some of these ingredients before.

I also appreciated that at least the names of the ingredients in the blends were included – something that isn’t legally required.

Because Norcodrene is extremely potent, the dosing instructions are very specific.

They say to start out with one Norcodrene capsule on an empty stomach 30-45 minutes before breakfast, and another capsule 5 to 6 hours later.

This is to assess your tolerance and basically make sure that if you have side effects, they won’t be so bad.

Once your tolerance has been determined, you can take an additional capsule with your morning dose, but under no circumstances are you to take more than 3 capsules in one day.

On Bodybuilding.com, the product has a rating of 9 out of 10. Some of the users also commented on the SA2-2 yohime, stating that even though they normally cannot take yohimbe, they experienced absolutely no side effects with this formula.

Add these reviews to the fact that PES is a highly reputable company, and Norcodrene seems like a very promising supplement.

The only potential issues I could foresee are the same negative side effect associated with any supplement.

If you following the instructions, however, and test your tolerance first, you should be fine.

As always, however, do not take any stimulant if you have a preexisting heart condition or are taking any cardiovascular medications.

This is a serious supplement.

You can pick up Norcodrene at GNC or online through the PES website or other supplement retailers.

The 90 count bottle which is a one month supply sells at GNC and the website for $59.99, but I found it for half that at Amazon and other online retailers.

Norcodrene is a fairly new supplement and it’s ingredient list reflects that.The fat burner is based on the most recent science and includes many substances that are only just gaining popularity.

In addition, Norcodrene is designed to encourage fat lose from many different angles: It suppresses your appetite, speeds up your metabolism and increases the breakdown of body fat.

Of course, anything this stimulant-heavy always comes with some pretty bright caution lights and you should not ignore them.

If you decide to take Norcodrene, follow the instructions carefully and test your tolerance before moving forward.

Overall, when something has as many ardent fans as Norcodrene, it’s hard not to recommend it.

Along with the other supplements from PES, Norcodrene has quickly gathered an intense group of supporters which can lead to one conclusion: It works.

Even more impressively, it seems to work with minimal side effects.

And when you add in the potentially low price, it’s a no-brainer.

Remember, though, to get that low price, you may have to shop around.

In fact, the manufacturer’s price was the highest I saw.

Have You Used Norcodrene? Leave Your Review Below!

How long does it take to fee energized? -Lynnette

It's generally pretty quick, about 15-30 minutes.  Make sure you start off with just one capsule at first, preferably with a meal. This will ensure that if there are any side effects, they'll be generally pretty mild.- Rob