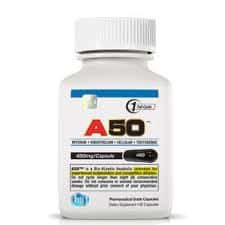 Home » Testosterone Boosters » BPI A50 Review – Is BPI A50 Discontinued?

Back in fall of 2010, there was a lot of hype and anticipation for a new, yet to be released product form BPI Sports called called A50. It was supposed to be modeled after Anadrol 50, and it had all the bodybuilding forums abuzz with musings about what it would be and what it would do for you. Would it be a prohormone? Would it be legal? Would it be a testosterone booster? Nobody seemed to know, but everybody wished they did.

Finally, in early 2011, BPI A50 arrived. Here’s what it promised to do (all with exclamation points!)

I can’t emphasize enough how much hype BPI A50 got. They really piled it on. Talk about how it’s been in the research and development phase for years. Ads in every relevant magazine. Pushing back the release date over and over until people were just salivating waiting for it. Saying it was only for serious bodybuilders, and that others should not even consider it.

Then BPI A50 arrived. 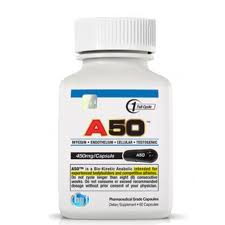 BPI A50 Ingredients and How They Work

There are two proprietary complexes that make up BPI A50:

You are warned right on the label that you should consult with a doctor and have a complete blood workup before starting on BPI A50. And there’s a whole list of contraindications. The recommended dose is 1 capsule 3 times a day on a full stomach for 4 to 8 weeks. Then cycle off for four and back on again.

About 2 and a half years have passed, and BPI A50 has been discontinued. I guess you’d say it didn’t live up to the hype. Most of the BPI A50 reviews and discussions I found were negative. For the most part, they all said that while affordable, BPI A50 did absolutely nothing except maybe make them regular. (No, I’m not kidding. It’s got a diuretic to help with pumps).

Since BPI A50 has been discontinued, it is no longer available on the company website. It is, however, still around through some online supplement retailers. We found it at i-supplements where a 60-count bottle was available for $30.99.

Well what can I say about a supplement that was supposed to be the best legal bodybuilding support anyone had ever seen or heard of, only to be taken off the market 2 years later? I wish I could tell you what happened, but I’m assuming it had to be one of two things. Either it was just a dud and BPI didn’t want the embarrassment any longer or BPI A50contained an illegal ingredient and got recalled. There’s no evidence of a recall so I’m going with the first explanation.

All in all, there are far too many “ifs” and “maybes” when it comes to this supplement for me to feel comfortable recommending it or even being able to wrap my head around it long enough to form a solid opinion because they have done very little in the way anything that would indicate that they are legit or that their effects are meaningful.

Have You Used BPI A50? Leave Your Review Below!

can I find the BPI A50 anywhere??? I used the product and loved it! -Jeremiah

Sorry, man. It's been discontinued.- Rob