The other day, I got a text taking to me to a link with an attention grabbing headline. 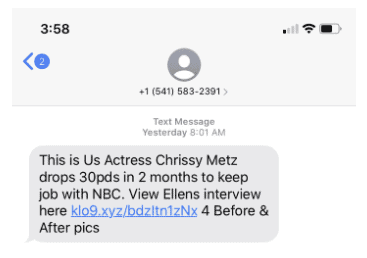 And the headline read like this: “Chrissy Metz Forced to Lose 35 Pounds By ‘NBC’ Producers”.

Here’s an actual screenshot from the advert: 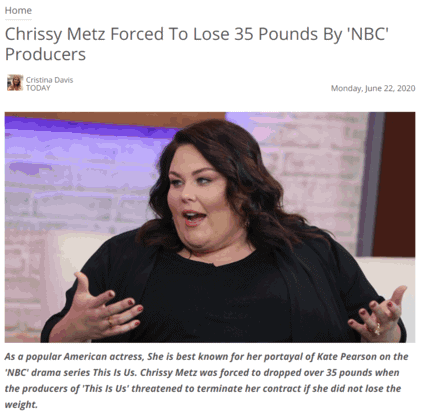 I know what you’re thinking.

That’s what anyone would think.

That is an attention grabbing headline and immediately makes you want to read on and find out how such a huge television network could do something so cruel.

Well, I hate to say it, but when you do read on, all that you get is a bunch of bologna, so to speak.

See, before this article was removed from the internet (for obvious reasons), it existed to trick readers into reading on to find out how she lost that weight.

According to the article (which I took a full screenshot of here before they deleted it), Ellen DeGeneres saved the day by telling Chrissy Metz that what she needs is Keto Advance.

See for yourself below: 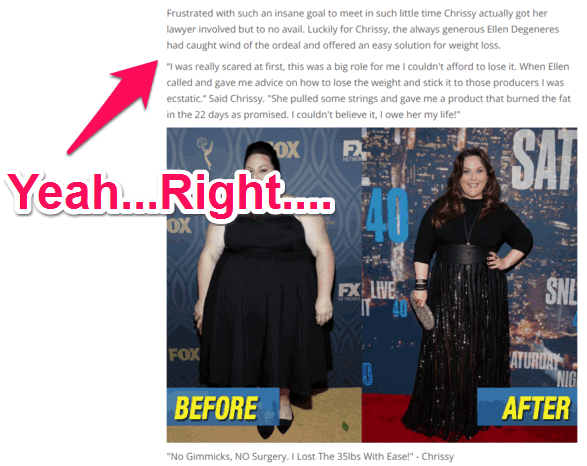 How random that Ellen, who has been bone thin her whole life, has a wealth of weight loss supplement knowledge at her disposal.

Well, I am here to tell you that this ridiculous article is a sham.

Sure, Chrissy Metz did go on the Ellen DeGeneres Show.

In fact, on the show, she talked about weight loss.

Every other inch of that article besides that is a lie, and that is why they likely deleted it to avoid a much deserved lawsuit.

And no, she was not “forced” into anything by NBC.

Let’s get into this ridiculous article so that you can understand how easy it is to debunk a scam.

Especially when the people behind it are entirely lacking in creativity.

The very first thing that should tip you off about this scam article is the concept itself.

Does anybody really think that NBC would risk being cancelled and upsetting the masses by telling a woman that if she didn’t lose 35 pounds they would fire her?

I don’t think so.

And even if they did, could anyone really believe that she would go on the Ellen show to voice her legal woes about her employer?

In fact, all that you need to do is head to YouTube to check out the interview itself.

You can see the full interview on Ellen below:

It’s a good interview covering a wide range of topics.

One topic that absolutely never comes up, is Keto Advanced, the purported miracle cure that this article claims Ellen turned her onto.

Not only does she say in the interview that she accepted the role already knowing that she had to lose weight as a part of her character’s story arc, but she even expresses how happy she is about it.

There is no mention of Keto Advanced whatsoever.

You Have Got to Be Kidding…..

If that opening to this scam article was not laughable enough, get ready for this next doozy.

The author of the article claims that when they reached out to Ellen, she declined to comment. 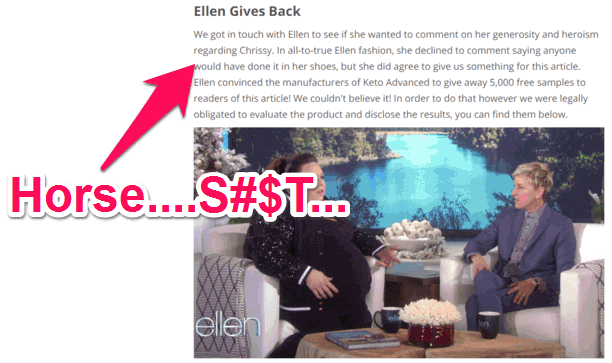 However, according to this article she did agree to do something for her fans and readers of the article in question.

Allegedly, Ellen used her show business royalty status to convince Keto Advanced to give away 5,000 free samples of their product for readers of the article.

It is almost infuriating how ridiculous that is, and it makes you wonder who signed off on something like that being posted for the world to see.

Nonetheless, it goes without saying that it is a complete fabrication.

There is zero record of that on the internet whatsoever.

Now, Ellen is very generous and there is no question of that.

However, she has zero relation to Keto Advance and is seems a little bit too clever to ask such an irreputable brand to disperse free samples on her behalf to a readers of a poorly written article.

Do a Little Digging

If you aren’t already convinced of how ridiculous the Chrissy Metz scam article is, all you need to do is google a few things.

Search “Chrissy Metz weight loss” or “how did Chrissy Metz lose weight”, and you will find the real answer.

“All I did was eat a 2,000-calorie diet and walk 20 minutes a day”, is what Chrissy Metz had to say when she was asked how she shed the weight for the show in a Women’s Health interview.

Notice that there is no mention of Keto Advanced.

That is because it has nothing to do with her weight loss, and realistically, she probably has never even heard of it.

While you’re at, you can look up the Ellen interview in full.

It is not exceedingly long, has a few good laughs and makes zero mentions of Keto Advanced.

If you are still not convinced and need to do a little bit more fact checking, don’t worry.

There are plenty of other online sources proving how ridiculous this Chrissy Metz scam article is.

All that you need to do is google Keto Advanced itself.

If you have read any of my other articles debunking similar scams, you may have picked up on some of the staples in these sham articles.

This bogus Chrissy Metz article is far from the first one that uses a fake celebrity endorsement to draw you in and give them your money.

Possibly the most common scam circulating across the internet is the Shark Tank scam.

I’ll catch you up on it really quick if you have not encountered it before.

Essentially, many shady businesses circulate an article with basically the same wording except for the product name claiming that their product was a smash hit.

I’ve got news for you; it is a lie every single time.

These Shark Tank scam articles go up, then they get taken down like clockwork.

Interestingly enough, when you google Keto Advanced, what’s the one of the first things that comes up?

Oh, and also endless videos questioning whether or not it is a scam.

Besides not being accredited by the Better Business Bureau (BBB), they also don’t have a great reputation with them.

Head to the BBB page for Keto Advanced to get a better idea of how shady the weight loss supplement really is.

You find several comments talking about having to weight months and months for refunds of hundreds of dollars.

Unsurprisingly, you also find examples of how Keto Advanced is yet another brand that tries to steal money from people looking for a free trial.

If you have never come across free trial scams, let me explain it briefly.

Basically, free trial scams are where you sign up for a free trial only to be auto billed either right after or at random.

It is a lazy and shady way to capitalize on people curious about their product that want to try it to see if they want to stick with it.

Instead of winning over customers by producing a high quality product, companies like Keto Advanced instead choose to steal their money by preying on people who don’t keep up to date on the latest internet scam trends.

One example is a man who was auto billed $300 after signing up for a “free” trial with Keto Advanced.

Considering that this scam article was taken off the internet almost as quickly as it went up, we can assume a few things.

One, they were getting a lot of negative feedback and wanted to save face.

Two, they feared legal action or are ready to move onto the next scam.

It’s probably a mixture of both.

The fact is, this scam and every other scam-happy supplement brands I have come across spreads their tendrils all over the internet.

By that I mean, If they aren’t trying to steal your money one way, I can guarantee you that they are in another.

One of the funnier aspects of the Keto Advanced Chrissy Metz article is that they actually thought it was convincing.

So much so that they even put at the bottom “ONLY 6 FREE BOTTLES LEFT”.

Right, so that means that 4,994 people actually fell for that.

I don’t think so.

Furthermore, take a look at the “comments section”.

Either they are fake or bought and paid for.

I lean towards fake considering how unconvincing and poorly written they are.

It should take trust in a product to ingest it.

After all, everything that we ingest affects our overall health.

Because of that, we can never take the supplements that we put in our body lightly.

When a brand like Keto Advanced or any one of the other shady companies out there does nothing but lie directly to potential customers, it is hard to trust that their product is safe.

Don’t fall for something that is so clearly fake.