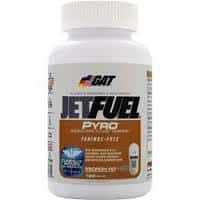 German American Technologies (GAT) set out to solve all the problems that can be inherent in fat burners.

And let’s face it, it’s hard to find an effective fat burner or weight loss pill.

Any company that recognized these problems and attempts to address them is worth looking at.

And when it’s GAT, it’s even more potentially impressive, since they’ve got such a great reputation for making quality products.

The idea is that just as much as the technical help, you need motivational help and mood support if you’re going to stick with your program and reach your goals. 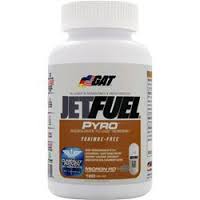 GAT JetFuel Pyro Ingredients and How They Work

The GAT JetFuel Pyro formula is split up into several “blends,” each designed to provide targeted advantage.

Then there’s the Jetfuel Bio-Accelerating Maximum Absorption System which contains Bioperine, which increases the bioavailability of the other ingredients so they work quickly and efficiently.

Once you assess your tolerance, you can adjust your dose upward toward 2-3 capsules before each of the 2 meals.

You can purchase GAT JetFuel Pyro through the GAT website or a number of other online retailers.

There are enough positive GAT JetFuel Pyroreviews to cause me to recommend it if you’re looking for a fat burner that’ll help carry you through your weight loss program, even when you’re motivation starts slipping.Just make sure to shop around for your best price.

Have You Used GAT JetFuel Pyro?