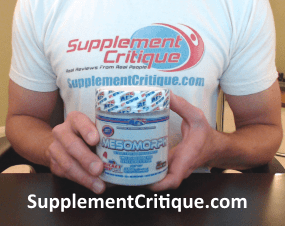 If you’re like most guys, you want a few distinct things from your pre workout powder, and they all lead to the same thing – insane results.

And if you’ve tried more than a few different products, you’re probably starting to get the idea that the perfect product, with the right combination of energy, pump, and power, just doesn’t exist.

In the end, that may be true, but that doesn’t mean I won’t keep searching.

Mesomorph from APS Nutrition has been getting a lot of buzz lately.

They say the energy and pumps are insane, and on top of that it keeps your muscles working hard long after other pre workouts leave you spent.

Unlike so many other products, Mesomorph uses clinical doses of the primary active ingredients in the formula.

This means you’re not just getting lip service about the good it can do.

Mesomorph may actually deliver the:

What’s in the Mesomorph formula that makes it deliver?

There are 2 ingredient complexes that make up the complete formula.

Each complex is a proprietary blend, so we don’t know what the exact doses are for most of the ingredients.This is unfortunate since one of their claims to fame is that they use clinical dosing.

But I will say, the total dose represented by each complex is substantial.

Click Here to see a picture of the label.

If you’re familiar with DMAA, you are probably aware of the FDA having banned it. Yep, that’s the stuff.

The story in a nutshell is that in 2012, the FDA warned supplement makers that DMAA may cause side effects, and does not fall into the category of natural substances, and therefore it was banned.

Most manufacturers took their DMAA-containing products off the market at that time or shortly thereafter.

Subsequently, Hi-Tech Pharmaceuticals (parent company of APS Nutrition) brought DMAA back, stating that it is indeed natural since it comes from the geranium plant.

Further, they state that side effects, such as increased blood pressure, are only seen at levels of 75 mg or above whereas Mesomorph contains just 65 gm.

Hi Tech Pharmaceuticals is battling the FDA in court now, arguing that not only is DMAA natural, but that it is safe as well.

They say they’ve sold over 100 million doses and are not aware of any serious adverse events associated with it.

There had been a pending case involving the death of a soldier, but that case was dismissed in early 2016.

If you do try Mesomorph, start out with a half dose to assess your tolerance and how you’ll feel when taking it.

If all goes well, start increasing to a full dose slowly. 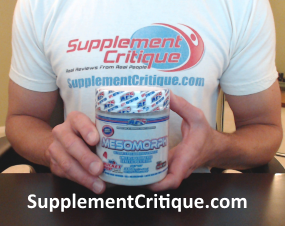 I have to admit, when I saw that Mesomorph pre workout had injected DMAA into their supplement, I pretty much knew it was going to work well.

I’s used plenty of supplements containing DMAA in the past, and I have never had a bad result.

In the end, my suspicions were confirmed. This stuff works GREAT!

The directions on the label state that you should take things slow with Mesomorph because of one of it’s primary ingredients, Beta Alanine.

If you’re not already aware, Beta Alanine can produce some weird side effects, including a burning tingling sensation.

This is COMPLETELY normal, but the folks over at APS nutrition should be commended for warning people ahead of time.

As such, they recommend starting with a low dose of a half a scoop. As I’m already pretty experienced with the effects of Beta-Alanine on myself, but haven’t taken it in over a year, I decided to do just that.

Within 20 minutes, and about halfway to my local Golds gym, I felt a SURGE of energy come over me.

What followed was probably one of the most intense workouts I’ve had in months.

I happened to be doing legs that day, and I ended up breaking some of my normal squat and deadlift records.

The one and only side effect I had was the comedown. It took about 3 – 4 hours to wear off, but when it did I got the usual very tired / fatigued feeling.

I have to admit, though, that this is very common for me on leg day, but the comedown seemed a bit amplified.

Mesomorph is only sold online. You can find it at the APS Nutrition website as well as several other online supplement retailers.

If you want a strong pre workout, Mesomorph is definitely up your alley.Just be aware of the potential side effects and use caution.

Have You Used Mesomorph?

Hi Rob, is Mesomorph okay for a 55yr old to take or am I better off keeping to Nitrocut? Thanks -Steve

As long as you're healthy and your goal is to put on muscle, you're age is fine. You may want to start with a half dose to assess your tolerance at first. If you have no issues, start with a full dose after about 2-3 days.- Rob