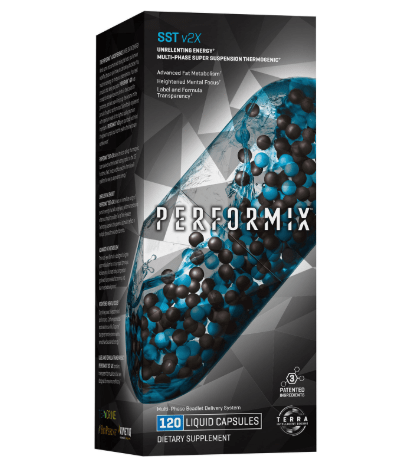 At one point we reviewed one of the more popular weight loss products on the market—Performix SST Suspension Super Thermogenic. 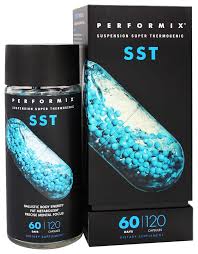 The product’s makers claim it will help you burn fat, while improving energy and focus.

It’s a popular option in the bodybuilding community because it helps competitors get as cut as possible, at least based on the claims surrounding the product.

Performix SST is unique in that it features something called Terra extended-release technology.

The active ingredients are released over time, theoretically.

With that being said, we were interested when we heard about a newer version of the product, Performix SST V2X.

This product takes some of the elements of the popular original supplement and builds on them, but there are differences as well.

So what’s to know, and is Performix SSST V2X living up to the hype of its predecessor?

What Is Performix SST V2X?

Performix SST V2X is a new take on the original Performix thermogenic.

It’s described as a formula that will dramatically boost energy.

The objective of this product, based on the ingredient formulation, is to promote thermogenesis and stimulate the burning of calories, along with giving you more energy.

Instructions for Performix SST V2X indicate it should be used along with a healthy diet, and regular exercise.

Some of the main, active ingredients in Performix SST V2X include:

Here’s a snapshot of the label: 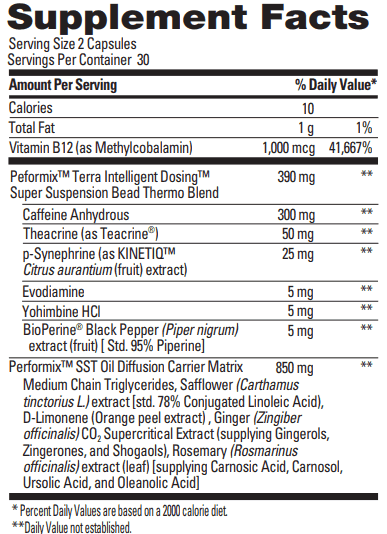 This ingredient can help prevent fatigue and ensure that the user continues to work out with plenty of energy.

Mental clarity and focus can be improved during phase 2 as well.

There is a release of the p-Synephrine, which is also referred to as bitter orange.

Bitter orange is like a less powerful version of the diet drug ephedrine.

P-Synephrine is supposed to help boost energy and metabolism, and improve weight loss.

Ingredients including yohimbine and Bioperine are activated.

BioPerine is often included in supplements as a way to help other ingredients be more readily absorbed in the body.

Medium chain triglycerides, safflower extract, and d-limonene are all types of oils that are used in this product, and they may help burn fat.

All of the active ingredients are encased in a special shell, which is how they’re released over time.

What Do the Reviews Say About Performix SST V2X?

Much like the previous Performix version, reviews tend to be polarized for this product.

People tend to say it’s great, or they didn’t like it at all.

On the Performix website, some users say it’s a great product and the best of the SST thermogenics. However, they also correctly point out that you need to also watch your diet and exercise if you want to see the best results.

Another user on the Performix website pointed out that they have followed instructions, and they haven’t had any positive benefits.

They report having adverse side effects, however.

These, according to this reviewer, include feeling nauseous, jittery, unfocused and more tired than usual in the gym.

I actually applaud the makers of Performix for allowing this review to actually stay up.

I can’t tell you how many companies I’ve reviewed that blatantly remove reviews like this in an effort to trick you into thinking their product works for everyone!

On the GNC website, Performix SST V2X has an overall rating of four out of five stars.

Many of the reviewers had favorable and positive things to say about the product including that it worked as it said it did, and that it improved their energy.

Some buyers did say it was expensive, but that they felt it was worth it to them.

Specific things cited on the GNC site from reviewers that were positive included:

Here’s a snapshot of a few of them: 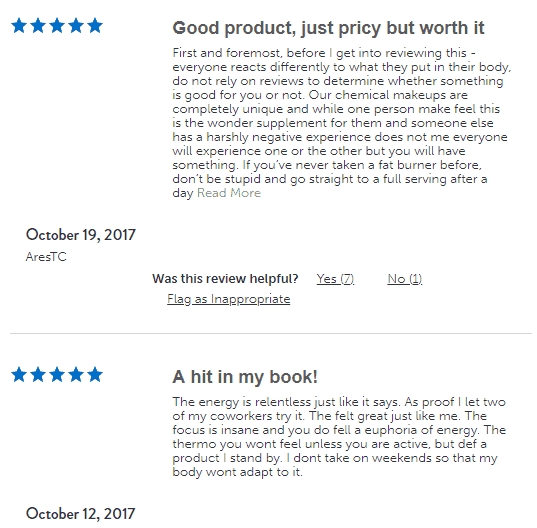 Of course, as was touched on already, this is a product where people either seem to rave it about it and think it’s amazing or they hate it.

Negative things highlighted in GNC reviews include that it isn’t effective, or that it creates uncomfortable side effects such as muscle spasms or severe headaches.

Some users do describe it as a waste of money.

Some reviewers also said they liked the original formulation of the product better than this one.

Even for people who really like this product, the high price tag and high caffeine content is frequently cited as a drawback. 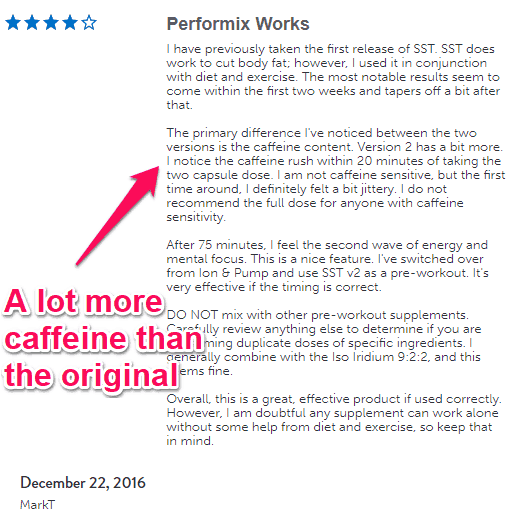 The breakdown of the reviews on Amazon for Performix SST V2X are pretty similar to reviews other places.

For example, it has 4 out of 5 stars on Amazon.

Around 64 percent of the reviews on Amazon are five-star. 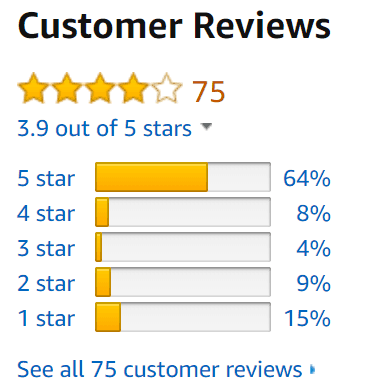 The following are some of the highlights from the five-star Amazon reviews:

Now for the negative Amazon reviews: 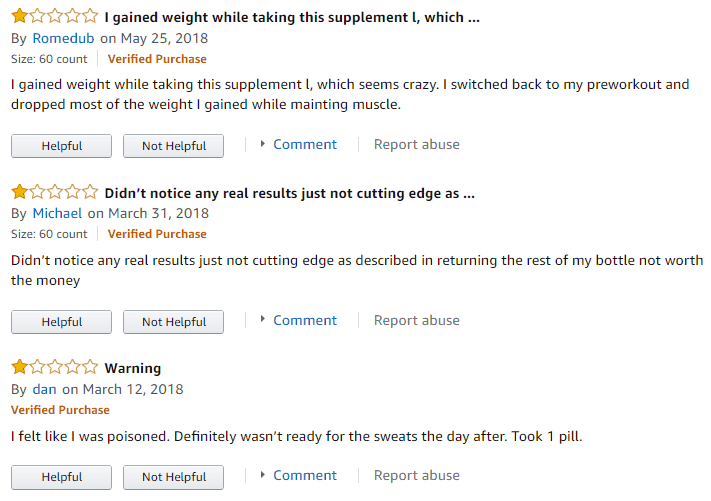 There are also YouTube reviews on the product, and one, in particular, gives a bit more of an in-depth overview of what it’s like to take this product.

The reviewer says that some of the things she likes about Performix SST V2X are that it gives her an immediate rush and boost of energy, or at least within 10 minutes after taking it.

She said that she also likes it only has to be taken once a day.

According to this same YouTube reviewer, the two downsides in her opinion are the fact that it’s expensive, and it can cause excessive sweating.

How Do I Take Preformix SST V2X?

According to the instructions on the product label, Performix SST V2X should be taken in the morning on an empty stomach.

The standard serving is two capsules.

However, the manufacturers recommend taking one capsule to start, to see how they react to it.

Then, if the user doesn’t experience any serious or negative side effects, they can move up to two capsules, taken once a day.

The overall way that the two products work are similar to one another, but there are a few differences. 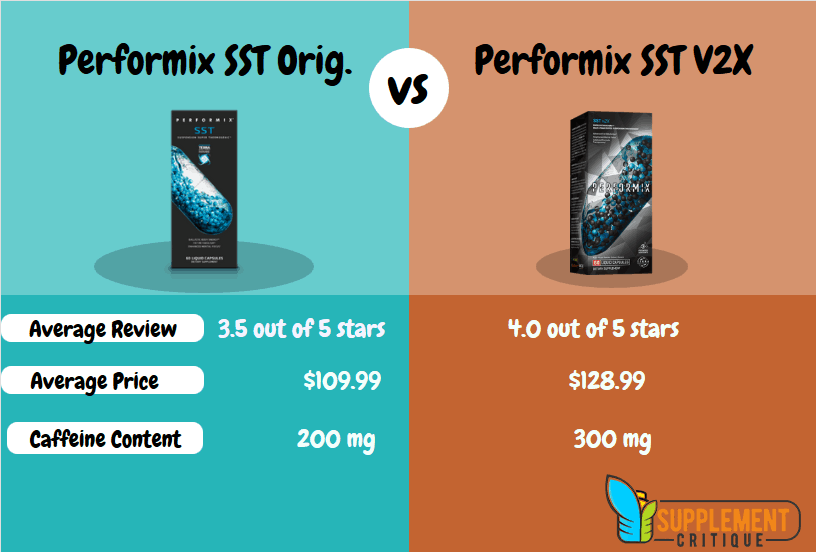 The original Performix has some different ingredients than the original version.

For example, you won’t see niacin and cayenne pepper in SST V2X.

Other ingredients that are in SST and not SST V2X also include Sensoril Ashwagandha, Huperzine A, and Mucuna pruiens.

Newly added ingredients in SST V2X not in SST include something called evodiamine, the p-Synephrine, rosemary extract, and the D-limonene or orange peel extract.

For the most part, the ingredients added to the newest version of this supplement are more powerful, and there’s also more caffeine.

Beyond that, the biggest ingredient difference is the fact that SST V2X has p-Synephrine, which is believed to be a powerful fat burner.

Another difference you’ll see is in the price.

For 120 capsules of the original SST, the price on the manufacturer’s website is $109.99 before factoring in shipping and taxes.For a 120 capsule bottle of SST V2X, the price is 128.99, before taxes and shipping.

Overall, most users agree SST V2X is a more potent product, and it has more intensity regarding the increased energy levels it delivers.

Are There Side Effects and Is It Safe?

The specific formulation behind SST V2X isn’t approved by the FDA, although this is common with dietary supplements.

If we want to look at possible side effects and safety risks, you have to simply rely on what’s available for each ingredient as well as consumer reviews and reports.

For the most part, SST V2X seems to be fairly safe.

However, some side effects are possible. 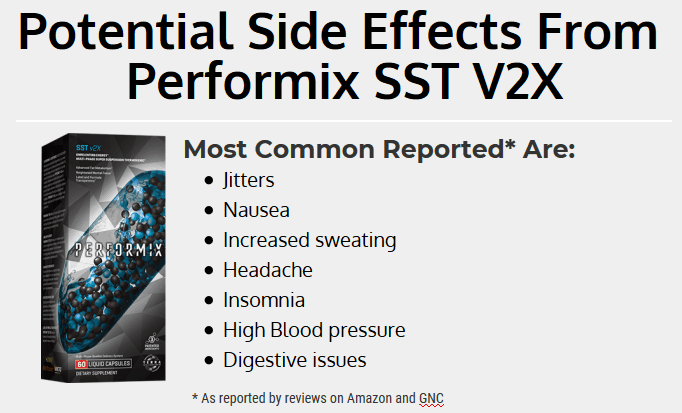 The side effects of SST V2X are pretty standard with most stimulant dietary supplements.

Some people say they have side effects like a headache and sleep disturbances as well.

High blood pressure and digestive problems may occur with the use of SST V2X, especially because of the ingredient yohimbine.

Since p-Synephrine is related to ephedrine, there can serious side effects related to this ingredient also.

If you’ve ever had blood pressure or cardiovascular problems in the past, you might be cautious about using this supplement.

Can Women use Performix SST V2X?

The manufacturers of the product do have some products geared toward men specifically, but this isn’t one of them.

Can I Take Preformix SST V2X with Alcohol?

It’s not recommended you mix this supplement with alcohol.

Alcohol is a depressant, while Performix is a stimulant.

Combining the two can heighten the side effects of both, and can increase the likelihood of adverse effects like nausea and vomiting, headaches, or dizziness.

Where Can You Buy Preformix SST V2X?

There are various options if you want to buy Preformix SST V2X.

You can go directly to the Performix website, where they offer the option to make a one-time purchase, or subscribe for monthly delivery and save 10 percent.

You can purchase Preformix SST V2X on Amazon from different retailers.

It does seem to be significantly cheaper on Amazon.

If you buy from GNC, you can get 60 capsules for $75.99, although it’s currently sold out.When the product is back in stock, free shipping is available through GNC for orders of more than $49. As with the other retailers, you can set up an auto delivery plan and save 10 percent.

Based on our research and the number of positive reviews, there’s a good chance you can see results from using it.

If nothing else, most people who use it say they have increased energy levels and mental clarity.

There are quite a few reviews out there that also talk about some pretty significant weight loss.

You may experience some symptoms, but from what we can tell it’s probably not going to be much more than you would any other stimulant.

It’s not cheap, but if you’re willing to spend the money, you may see that it works well.

Have you used Preformix SST V2X?

Leave your review below