So it’s Monday afternoon and I’m lazily scrolling through my Yahoo news feed after a somewhat boring day, when I came across yet another ad proclaiming that some “Miracle Testosterone Pill Nets Biggest Deal In Shark Tank History”.

The name of that pill is none other than Primal Growth, which sounds like it should be the title of a cheesy Jean Claude Van Damme movie.

Never mind the fact I already completely debunked the whole “Shark Tank Testosterone Booster” thing, which many of you have probably never seen (that is of course, unless you saw this already).

The title of the ad that’s being plastered all over Yahoo proclaims “No Longer An Embarrassing Issue For Men Anymore”, with the subtitle mentioning that millions of American men are being cured of some “important issues”.

What could be this embarrassing issue they speak of?

Once I clicked the ad (grudgingly), the first thing that’s plastered across my screen is a woman grabbing some dudes (rather large by all accounts) junk, and for about a split second what looked like the Fox News logo. 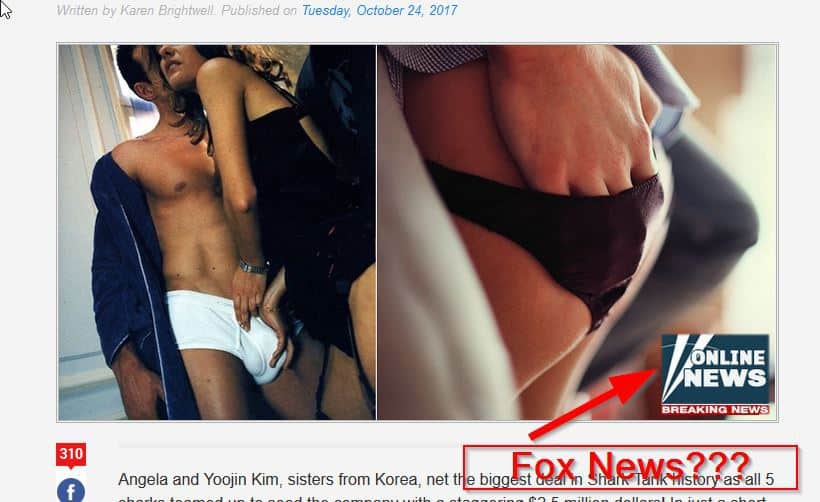 Throughout the article, they talk about how Primal Growth WILL:

All with just 1 pill a day.

If alarm bells aren’t going off in your head just yet, read on.

What is Primal Growth?

According to the official website, Primal Growth is a medical strength male enhancement supplement that’s designed to:

A bit different from the claims we’re seeing on this supposed “Fox News” article, but that’s not surprising. We’ll get into that later.

Primal Growth boasts that it’s now available without a prescription, front and center right at the top of their website. 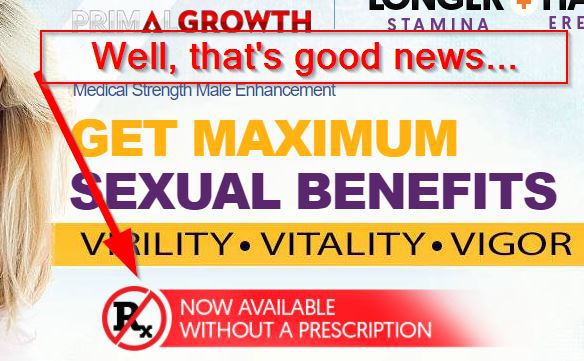 However, I couldn’t seem to find any information on it that suggested it ever WAS a prescription.

If you do a search on rxlist.com, which literally lists every single prescription medication that ever existed, you won’t see Primal Growth. 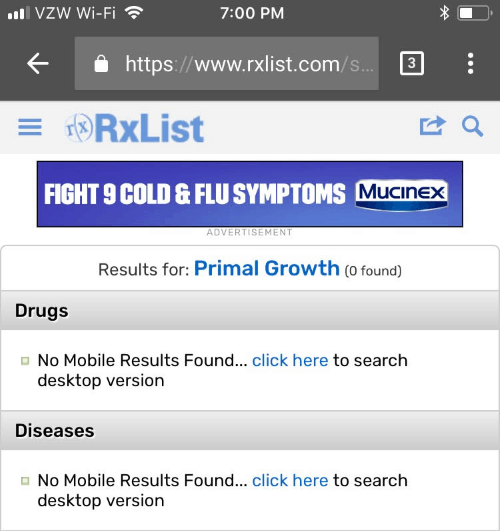 In fact, you won’t even see the individual words “Primal” or “Growth” mentioned on the site at all.

Is It A Testosterone Booster OR A Male Enhancement Pill?

This is the million dollar question.

On their website, it’s called a a medical strength male enhancement supplement.

On the label, it says it’s a testosterone booster.

One thing is for sure though, it was DEFINITELY seen on TV shows like The Doctors, CNBC, CNN, USA, and Mens Health. 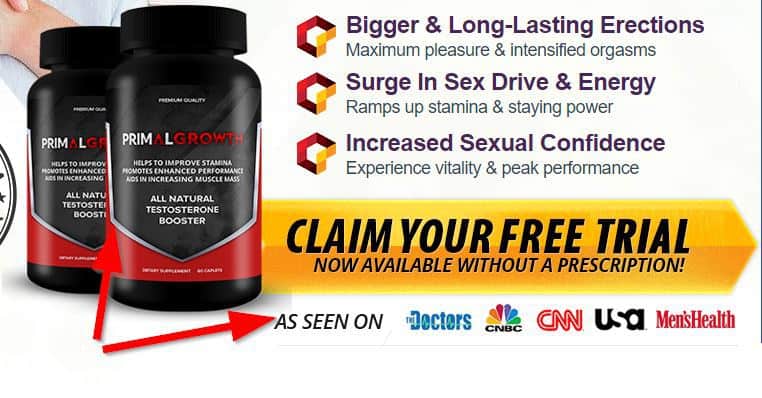 So let’s jump on over to Google and see what these sites were saying about it. 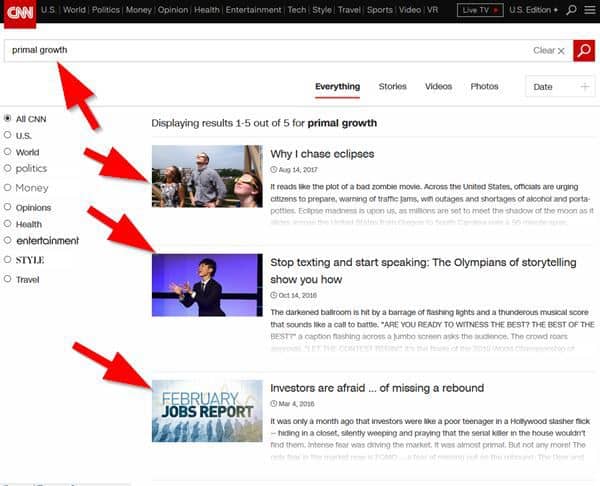 Nothing there, very strange. 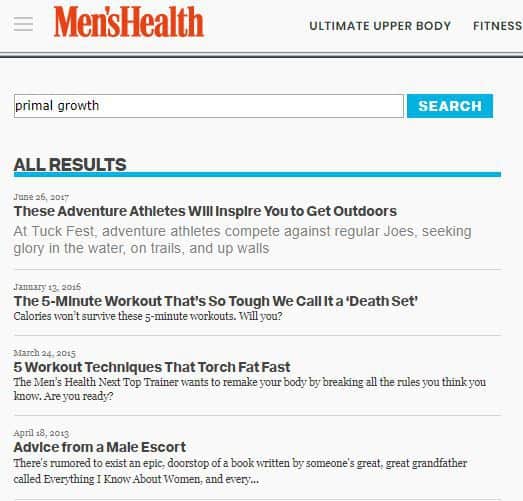 Are you beginning to see a pattern here??

There was no “As seen on” anything for Primal Growth. This is a sales tactic to help build the credibility of the supplement.

They (whoever is behind the marketing of Primal Growth) is banking on the fact that you’ll see the words CNN, MSNBC, Fox News, whatever, and automatically assume that it’s legit.

According to the official site, the ingredients in Primal Growth include:

It should be noted that this EXACT same ingredient formulation can be found in numerous other supplements, including Cianix, Zyntix, and Clemix.

And when I say exact same formula, I’m not talking about them just sharing the above ingredients.

I’m saying that they LITERALLY only contain those ingredients, and nothing else.

Not only that, but take a look at the Primal Growth website and compare it to the websites for some other products. 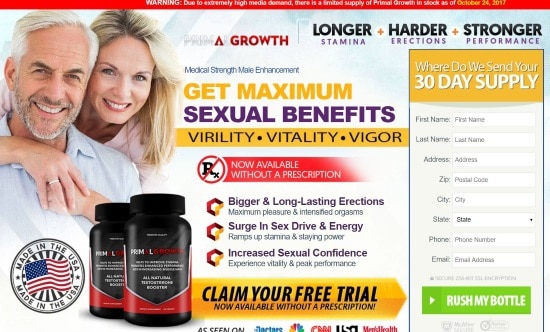 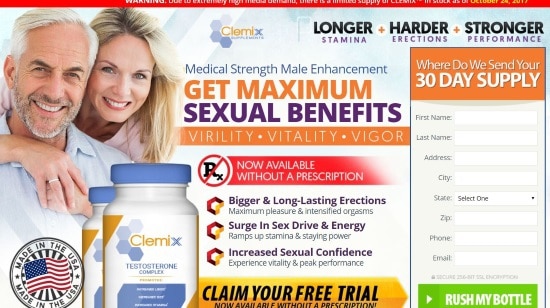 And here’s yet ANOTHER supplement called Primal-X: 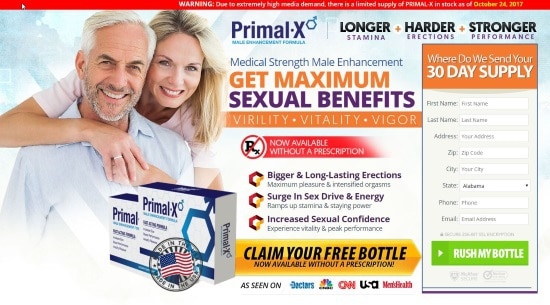 That’s right, they ALL look EXACTLY the same.

That’s because they’re ALL made by, and / or promoted by, the exact same company.

If you run a search on google, you’re bound to come up short in this department.

Practically every single site that wrote about it is either promoting it as an affiliate, or have no real credible info.

Take the ever-popular website healthy order dot org, which ranks in the #2 spot when you search “primal growth reviews”. 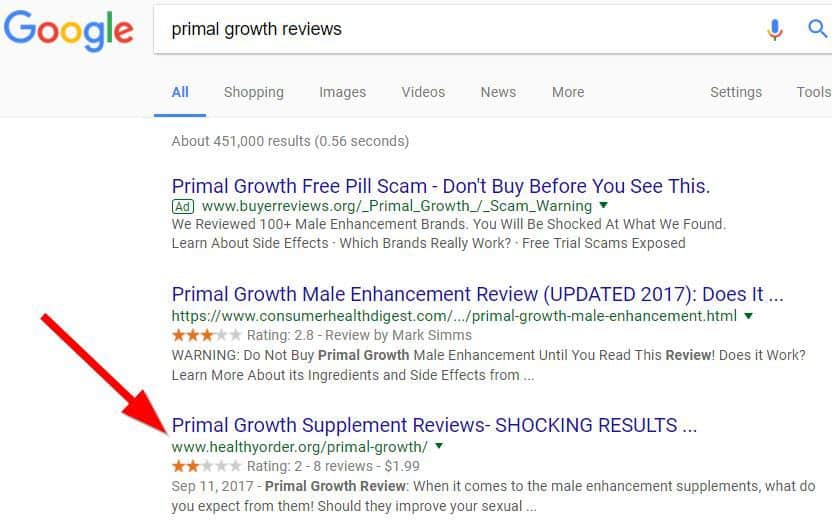 What does this pinnacle of health information have to say?

Here’s an exact quote from the first paragraph: “Anyways, all the fingers are not equal and even all the supplements are not scam”.

I was beginning to think all the fingers were equal!!

He goes on, under the “personal experience” section: “Now, I have been spending a happy and full of feelings like and even feel that I have become very young by the use of this supplement.”

All kidding aside, this entire “review” is nothing more than a 2500 word nonsensical, irrational, and poorly written post that is literally just trying to rank in google by looking like some sort of “authority” when it comes to supplements.

In fact, it’s not the only site that looks like this when you’re searching for anything related to Primal Growth, including the side effects, ingredients, whether or not it works, and where to buy.

Practically ALL of the sites that show up when you run a google search for anything related to the supplement end up looking like this.

Where To Buy Primal Growth?

So it looks like the only place you can buy Primal Growth is on their official website. You won’t find it in stores like GNC, Walmart, Walgreens, or CVS, so don’t even bother trying.

How much does it cost?

I mean, if it’s going to grow your penis, improve your stamina and confidence, and boost your erection quality, what would it be worth to you?

That’s right, for a limited time only the guys behind Primal Growth are giving away their product completely free!

And when I say “limited time only”, I mean it!

All you have to pay for is the low price of $4.97 to take care of the shipping and handling, and they’ll send a bottle straight to your door.

18 days later, they’ll charge your credit card the low price of only $87.41 unless you call to cancel.

WTF are you talking about, Rob?

Didn’t you see it right here in the terms in conditions in the REALLY small font at the bottom of the page? 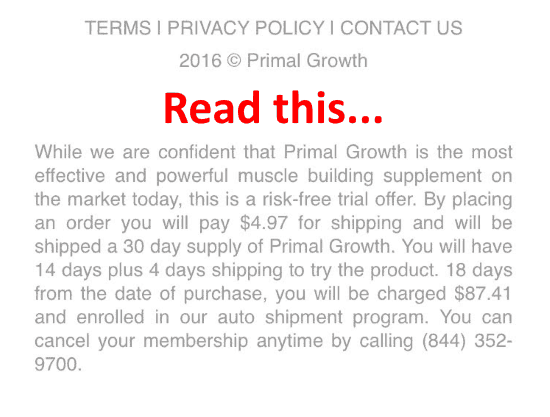 You don’t know how many guys I talk to every single day that get caught into these free-trial, auto-rebill supplement scams.

Run. Run as fast as you can from this!

This kind of shit happens all the time, and it’s been nearly impossible for me to keep up with it. Just as soon as I write about one scam product like Primal Growth, another 5 pop up in its place.

You’ll see these same types of Shark Tank scams popping up all over the place as well.

In one case, they we actually pitching a damn wrinkle cream!

Most guys think they’re getting a free sample when they fork over the credit card info, but as you can tell from above, this is simply not the case.

Have You Used Primal Growth Pills? Leave Your Review Below!

It used to be available through their official website, but I don't see it anymore. It was probably discontinued. - Rob