Every couple of years, we get introduced to a new wonder ingredient that promises to finally be the answer we’ve all been waiting for, the substance that melts the fat away, with little or no effort from you.

It shows up on all the daytime talk shows. It’s touted by doctors.

Real people show off their incredible before and after proof that this stuff really is a miracle.

You’ve seen it with Raspberry Ketones.

You’ve seen it with Garcinia Cambogia.

And more recently, you’ve seen it with Coleus Forskohlii.

What Is Pro Lean Forskolin?

Pro Lean Forskolin is a weight loss supplement that promises you can lose weight and get more fit without needing to bother with changes to your diet or exercise routine. That’s what they say.

The way it works is by causing your metabolism to increase and your body to burn more fat.

So if that’s true, then you really wouldn’t need to change your habits to lose weight.

Of course, you’d lose more weight if you did change your diet and exercise routine, but the fact would remain that you wouldn’t necessarily need to.

Coleus Forskohlii is a member of the mint family of herbs.

Forskolin comes from its root, and has been used for centuries in Ayurvedic medicine to treat a number of ailments, including Asthma, bacterial infections, and cardiovascular issues.

More recently, forskolin, the active ingredient in Pro Lean Forskolin, has been thought to have an effect on metabolism and weight loss.

The theory goes that Pro Lean Forskolin increases the activity of the enzyme Adenyll Cyclase.

This enzyme increases communication between cells caused by Cyclic AMP, or cAMP.

With increased cAMP, communication improves regarding the metabolism of sugar, glycogen, and lipids, and with better communication comes better functioning.

So you’re burning more of your food for energy, and you’re increasing the usage of stored fat.

So to break it down, Pro Lean Forskolin encourages the release of certain chemicals in your body that stimulate fat burning and lead to weight loss.

The science sounds good, but does it work?

We’re especially skeptical of any product that says it can cause weight loss without any help from you.

That’s why clinical studies are so important.

We only know of a couple small studies, and to be honest, the results were pretty mixed. One study conducted on men seemed to show a small improvement in body composition and an increase in testosterone levels.Lean muscle mass increased while body fat decreased and bone density improved, all moreso with Forskolin than without.

The study doesn’t specifically say any of the participants lost weight, however, just that they saw a positive change in body composition.

The other study conducted on women showed no increase in weight loss or improvement at all. 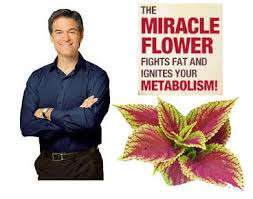 Surely you’re familiar with Dr Oz and his tendency to jump on the bandwagon for supplements and their ingredients, touting everything that comes down the pike as the latest and greatest thing for your health of beauty since Vitamin C. He started out on Oprah and catapulted from there to fame and fortune.

They may actually have some benefit in that arena, but the problem is in the way Dr Oz presents them as though they’re the magic key to the skinny kingdom that we’ve been searching for for literally centuries.

They’re not, and Dr Oz was actually called out by Congress for making exaggerated claims.

Well these days, Dr Oz has moved on to Forskolin as the magic new ingredient, and that’s a big reason why there’s so much attention being paid to it.

But don’t be drawn in too much by that.

Dr Oz has been revealed to be motivated by something other than medical certainty.

He has relationships with supplement providers, and that’s the main reason his recommendation doesn’t go as far as it once did.

The small amount of study conducted on Forskolin hasn’t resulted in much evidence regarding side effects.

The only potential issue that’s been raised is regarding the possibility of rapid or irregular heart rate.

No negative drug interactions have been documented, and the only precaution I’ve been able to find (other than the standard warning to avoid while pregnant or nursing) is that it should be avoided by patients with polycystic kidney disease (though I haven’t been able to determine why).

Where to Buy Pro Lean Forskolin

Pro Lean Forskolin is only available online through their official website.

There used to be several review website that linked to the Pro Lean Forskolin website, but those links don’t appear to work any longer.

The price for a single bottle of 30 capsules ranges from about $25 – $47, depending on how many bottles you buy.The clinical studies used dosing of 250 mg taken twice a day.

With 125 mg of Foskolin per pill, that means you’d be taking 4 pills per day to match the clinical dose.

At that rate, you’ll be needing a new bottle just about every week, which could get pretty expensive.

They do offer a money back guarantee, but with a restocking fee of $17.50 per bottle, and considering you have to pay for return shipping, it’s hardly worth the trouble.

According to the Better Business Bureau, Pro Lean Forskolin is made by a company in Utah that’s been around since November of 2012. In that short time, they’ve amassed several complaints from customers along with a rating of F.The complaints run the gamut of issues from billing to delivery to problems with the supplement itself.

Here are a couple examples.

As you can see, it’s pretty bad: 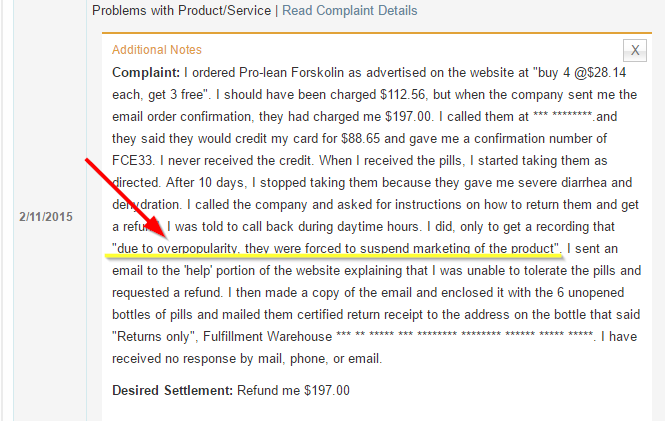 Things are in fact so bad that the company’s website has simply vanished off the internet.

At this point, it appears as though you can’t get Pro Lean Forskolin even if you wanted to.

The website is gone, and all the links that used to take you there lead somewhere else instead at this point.

The review websites have moved on to other, possibly more successful products.

And that doesn’t help the complaint issue at all.

People are looking for refunds and don’t seem to have anywhere to turn.

And this isn’t only because they found the product didn’t work so they want a refund.

It’s also because Pro Lean Forskolin overcharged them in the first place and took money they never should have taken.

Coleus Forskohlii supplements may have some benefit when it comes to weight loss, but it looks like Pro Lean Forskolinjumped the gun.

The clinical evidence is spotty, and with only only one ingredient, they put all their eggs in the forskolin basket.

That decision appears to have been hasty.

At this point, I don’t know where you would even find Pro Lean Forskolin to purchase if you wanted to.

Better to go with a well rounded fat burning supplement with energy and appetite suppression, and not just increased thermogenics.

Have You Used Pro Lean Forskolin?

I haven't looked into Elite Forskolin before, but it does look very similar, so I would expect similar results.- Rob

6 comments on “Pro Lean Forskolin Review – Does It Work?”