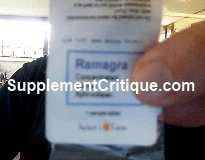 I have taken Ramagra for all most 6 months. but did not work. What a waste of money.  But mind you there were no side effects.