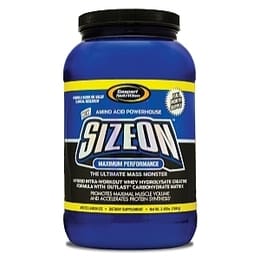 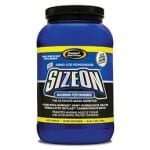 Imagine super-charging your workout even as you are doing it.

This is what the Gaspari Nutrition SizeOn beverage claims it can do.

It is called an “intra workout” supplement, and we decided to investigate it further to find out more.

We already knew about the nitric oxide “pre workout” supplements that enhanced muscle building and mental clarity by helping the body to produce an increased amount of NO (a natural vasodilator), so we were intrigued by this product’s claims of offering the same benefits through the use of an entirely different approach.

This product claimed to promote synthesis, battle fatigue, and amplify the conduction of the ingredients, and so we set out to determine if it lived up to its claims.

How It Works and Ingredients

The manufacturer of Gaspari Nutrition SizeOn has created two different formulations – the Maximum Performance and the Pre-Contest.

We looked strictly at the Maximum Performance blend because it offered the best “all around” solution.

The Gaspari Nutrition SizeOn Maximum Performance product uses a range of different proprietary blends and matrixes to accomplish its goals.

For instance, bodybuilders are encouraged to use it in order to build muscle mass, but others are also able to rely on this for its support in recovery from a workout, to increase performance in the gym, or even during any athletic competition.

Drinking this prior to a game, practice or sports event is encouraged by the manufacturers, but the actual instructions are to rely on it while training.

Using the product in this way ensures the best results, but we really were really surprised and impressed by the patented “LOLA” component of the Protein Synthesis Acceleration Matrix.

This is because the nutrients actually work together to “capture” ammonia and reduce the experience of fatigue during any athletic activities.

So, the next big question was “does it really work?”, and for that we turned to consumer reviews to find out more.

What we quickly learned was that the Gaspari Nutrition SizeOn Maximum Performance blend gets a solid “thumbs up” for all of its claims.

Bodybuilders and athletes using it generally agreed that it was a product that produced decent, reasonable and “not insane” amounts of muscle.

Many also loved the consistent levels of energy when using it during workouts and training.

Some called it the best Creatine-based product they had used, and all agreed that it was delicious to drink.

This last issue is fairly significant because many of the other intra and pre workout beverages are not palatable and this makes it hard to get them down during the workout.

Where a lot of the reviewers also agreed on the Gaspari Nutrition SizeOn product was the pricing.

Most just couldn’t tolerate the retail shop prices that averaged at around $60 dollars for the tub.When they looked online, however, they found that the 3.49 pound containers could be acquired for much less.

The tubs come in the Arctic Lemon Ice, Grape Cooler, Orange Cooler, and Wild Berry Punch flavors, and the prices range from $39 to $52 for the container.The MASSNutrition site had the best price, but the BestPriceNutrition.com site had the lowest shipping rates.

MySupplementStore.com was also very reasonable where shipping and pricing were concerned.

What we discovered was that Gaspari Nutrition SizeOn did live up to expectations, but that the cost often forced buyers to make a different choice.

When someone does use this product, however, they tend to stick with it because of its consistency and wide range of benefits.