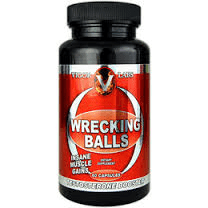 Home » Testosterone Boosters » Wrecking Balls Review – Should You Use It?

Vigor Labs makes a few different supplements for men looking for a boost in certain areas, namely body building and sexual performance. Wrecking Balls is their natural testosterone booster, so it covers both. By using herbs to increase the amount of testosterone your body naturally produces, and reduce the amount that it converts to estrogen, Wrecking Balls:

There are lots of testosterone boosters on the market. Let’s see if there’s anything about Wrecking Balls that sets it apart.

Wrecking Balls Ingredients and How They Work

The Wrecking Balls formula starts out with Niacin and Zinc. They’re both critical nutrients for their involvement in numerous bodily systems. Zinc is particularly important in the process of testosterone production. The rest is a proprietary formula which includes such herbals as:

The recommended dose is 2 Wrecking Balls capsules per day, preferably about 30 minutes before a workout if it’s a workout day. The trouble with a proprietary blend is that we have no idea how much of each ingredient there is, so we don’t know, for instance, whether or not there is enough Tribulus to do the trick.

Wrecking Ballsis available through several online supplement retailers as well as the Vigor Labs Website. The 60 count bottle is a one month supply, and it retails for $19.95. We saw it for as little as $15.95 so be sure to look around.

We look at Wrecking Balls as more of a male enhancement supplement than anything else. And if you look at it that way, it looks like it may be pretty effective. Reviewers say the main effect was libido enhancement, so if that’s where your head is, then Wrecking Balls may be a great, affordable supplement.

Have You Used Wrecking Balls? Leave Your Review Below!