If you could reverse the aging process, would you?

Of course you would, and that’s why X Alpha uses this concept to sell its natural testosterone boosting supplement.

X Alpha isn’t actual testosterone replacement; it doesn’t contain synthetic hormone that will throw your own natural systems out of whack.

Instead, it’s a natural formula that works with your body to produce more of your own testosterone.

When your body maintains an optimal testosterone level, you’ll see benefits such as:

When it doesn’t, the opposite happens, and at some point, you begin to notice.

At this point, we’ll take a closer look at X Alpha to determine what’s in it, who’s using it, and what kind of results they’re getting.

This way, you’ll end up with a much clearer idea of whether or not it’s something you want to use.

Where Did You Hear About X Alpha?

You won’t find X Alpha as your local GNC, Walmart, or CVS.

It’s only available online, and advertised through its own website and network of affiliate websites.

These affiliate websites look like reviews, but they’re actually more like portals, access points to the official X Alpha website where you’re encouraged to sign up for their “free trial”.We’ll talk more about the free trial a little later in the review.

Make sure to keep reading for it – it’s important.

When you’re thinking about trying a new supplement, the formula is obviously one of the first things you should check out.

Knowing what’s in a pill is key to knowing whether or not it’s likely to have a positive effect.

So we were highly disappointed when we discovered that X Alpha doesn’t discuss ingredients on its website.The closest they get is to say they use “scientifically tested ingredients”.

We did find a third party source claiming to know what ingredients are in the X Alpha formula.

In fact, they even provide an image listing the ingredients that they claim used to appear on the official website: 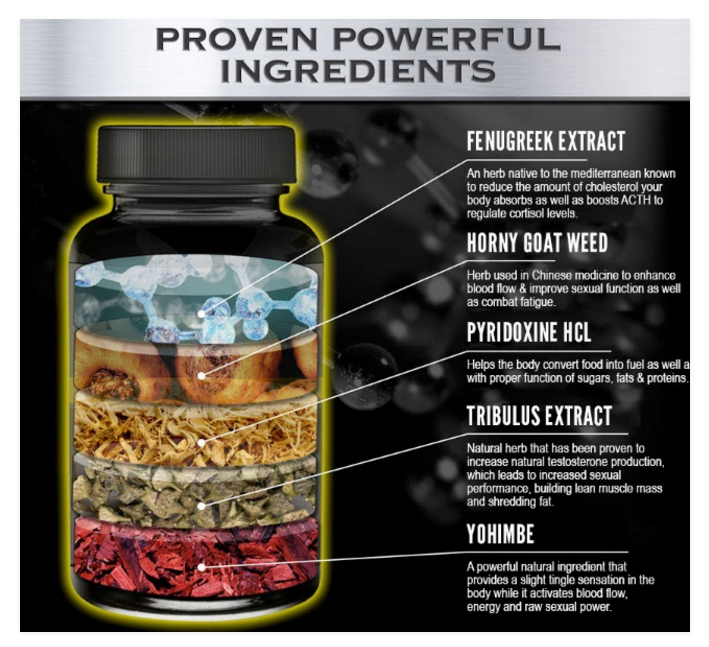 Here’s a breakdown of the ingredients, and how they are understood to benefit you:

How To Use X Alpha

This is a decent ingredient list for a natural testosterone booster/workout supplement/libido enhancer.

Unfortunately, there’s no available information on how much of each ingredient is in X Alpha, which makes it difficult to judge how effective it may be.

As far as instructions for use go, the website makes it clear that you should take 1 X Alpha pill in the morning as well as 1 pill before working out, for a total of two pills per day.

While researching X Alpha, the wording on the website became confusing after a while.

I noticed before long that in many sections, the product is referred to as “Alpha Testosterone” rather than X Alpha. It is pretty prevalent throughout the site.

To someone who doesn’t look at these kinds of supplements all day, this may be very confusing.

But because I do look at these kinds of supplements all day, I know exactly why this is the case.

These online supplement companies move very quickly from selling one product to selling another, and they make this change over and over again.

They do it mainly because their supplements aren’t particularly good, and they use scammy marketing techniques (which we’ll get to shortly).

So after alienating a number of customers with one product, they quickly change the name and packaging, and start selling this “new” product.

Sometimes – more often than you would think – they move so quickly that they miss making some of the changes they should have made.

In the case of X Alpha, they seemed to forget to update the product name completely throughout the website.

Here’s just one more of several examples of where they forgot to update the name:

X Alpha wants you to think that by signing up for their trial offer, you’ll be trying out the product for free.

In fact, they even call it a “sample” when you sign up. 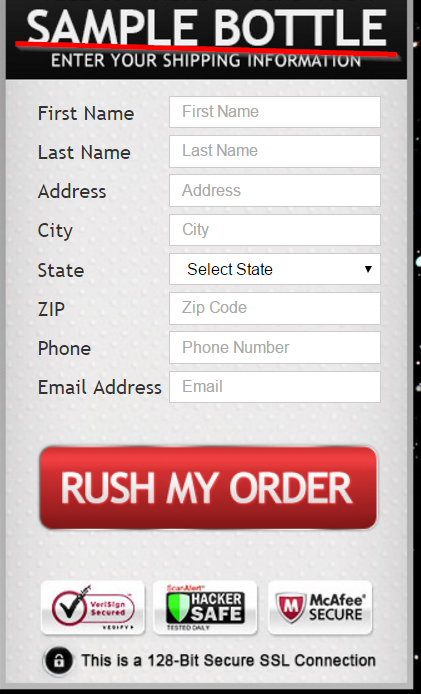 What really happens is that when you pay the small $4.95 shipping fee, X Alpha gets your credit card number.So 14 days later, if you haven’t called to cancel your “subscription,” they charge you full price for the “sample” bottle they sent you during the trial period.You are actually made to pay $89.95 for the “sample” bottle! Not only that, but they’ll start sending you a new full price bottle each month that you’ll have to continue to pay for until you contact them and cancel.

It’s all spelled out clearly in the terms and conditions, but it’s not advertised, or really made easily known anywhere during the normal ordering process.

Here’s what you’ll find if you dig into the Terms and Conditions document (which almost nobody does):

But you’ll only see these stipulations if you click on the Terms and Conditions page.Most customer get caught up in this scam because they mistakenly believe that they can’t sign up for something without actively taking an action.

But this set up is called a “negative option” because an action is taken by you without needing for you to take an active step.

You’d think this would be illegal, but as long as the terms are there, they are just scammy, not technically illegal.

What to Do If You’re Caught Up In The Scam

I can’t tell you how many guys contact me because they’ve been caught up in one of these scams.

They are positive they never ordered a second bottle, yet one shows up at their house, and they have to pay for it.

Usually, it’s worth trying to get your money back.

You may get a refund, but many of these companies won’t give it to you.

Regardless, you need to contact them to cancel your subscription, because if you don’t, you’ll continue to receive full price replacement bottles until you do.

The free trial scam should be enough to make you want to steer clear of X Alpha, but I do understand that some of you just want to know if the stuff works.

One way to figure that out, in addition to looking at the formula, is by checking out what other users have to say about a product.

You can buy X Alpha at Amazon.com (for $143.99!), but it looks like it’s been newly placed there because there isn’t any customer feedback in the form of reviews posted yet.They website also doesn’t display testimonials, so there really isn’t anywhere to go for this feedback.

I know you want to know if X Alpha works.

I haven’t tried it, but I have been reviewing these kinds of products for a long time.

When a supplement is offered on this kind of “surprise” subscription plan, it doesn’t speak highly of the actual benefits it might bestow. A truly beneficial supplement wouldn’t need to resort to trickery to get repeat offers.

And X Alpha is expensive to boot.

Not only to they charge you unknowingly, but it’s a pretty big charge.

Add in the fact that we don’t even truly know what ingredients go into the X Alpha formula, and that’s 3 strikes.

X Alpha is out.

Have You Used X Alpha?