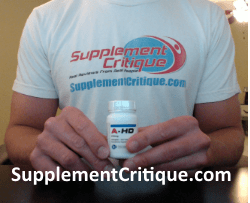 Experiencing mood swings out of the blue? Things not up to par in the bedroom?

For guys, this short list of symptoms could be the result of low testosterone levels.

Testosterone levels peak at the age of 30 then slowly make their way downhill every year thereafter.

In order to maintain proper health and an overall sense of well being, it’s important for guys to keep those levels up as long as they can.

One of the most convenient ways to do this, outside of seeing your doctor, is to supplement your diet with a testosterone booster.

BPI Sports has a reputation for making hardcore bodybuilding supplements, and BPI Sports A-HD is no exception.

BPI refers to it as a stimulant based testosterone-boosting supplement that you can feel right away.

The focus of the supplement is to increase your testosterone levels while blocking its conversion to estrogen. BPI claims that this is the product to take if you want to get that shredded, hard, dry cut look.

So what’s in this stuff exactly and does it live up to its promises?

BPI Sports A-HD Ingredients and How They Work

BPI Sports A-HD comes in both powder and capsule form, and it is meant to be used as a daily supplement.

The BPI Sports A-HD formula contains a number of ingredients in its proprietary blend including: 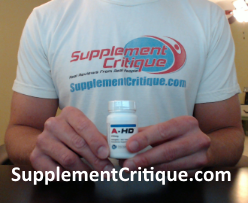 The BPI Sports A-HD formula also includes Yohimbe for its stimulant properties; however, they also have a version that is Yohimbe free.

For those of you who are not aware, Yohimbe is a powerful stimulant that is used in hundreds of supplements ranging from pre-workout boosters to male enhancers.

As a stimulant, there is always the risk of side effects for those who are sensitive to it.

Be sure to consult with your physician prior to using it.

Instructions are to take one scoop mixed with 4-8 ounces of water or juice in the morning on a full stomach.

It is recommended that you cycle it on for 4 to 8 weeks before taking a 4-week cycle off.

For the capsule version, you’re supposed to take 1 pill daily, typically in the morning as well.

Recently, BPI came out with a new and improved version of A-HD called A-HD Elite.

This formula is surprisingly different, and contains the following ingredients

You can pick up BPI Sports A-HD at GNC or online through a variety of different retailers. The 28 serving tub sells for about $27 through most of the retailers I found.It comes in fruit punch and watermelon flavors.

If you want to avoid the hassle of mixing, you can pick up a bottle of the capsules for slightly less at Bodybuilding.com for a price of $24.

As for the BPI Sports A-HD Elite, you can find that on the BPI website, as well as on the same retailers listed above. The price is comparable to the original, depending on the serving size.

My biggest reservation with A-HD are a few of the ingredients.It would be nice if hard facts and research could be found on these ingredients.

Instead, your left to make associations to plants in the same family that have shown promise.

The worst offender on the ingredient list is Flax Seed as this is a known pro-estrogen compound, used to block the conversion of DHT. Still, even with these little hiccups, I believe that A-HD is worth a try.

For a one-month supply, you can’t beat the price compared with other testosterone supporters.

You could go to the trouble of isolating those ingredients and buying them separately, but if you’d rather save yourself the trouble, go with A-HD.

As for the new and improved version (A-HD Elite), I would NOT recommend this formula.

It’s an overpriced supplement that has the sole claim of being an aphrodisiac, based solely on animal studies.

If you’re looking to boost your testosterone, Elite is not worth your money.

If you’re looking to boost your performance in the bedroom, Elite is still NOT worth it.

Check out my top picks for libido boosters above.

Have You Used BPI Sports A-HD?

I ordered this product with semi-low expectations. And it has yet to surpass those expectations, I'm on my second week with little to no change.  I've gone up in my lifts but I feel that is because I have been pushing myself to my maximum. Especially after reading up about these ingredients, anyone that says this product gets you lean and ripped is full of shit.  Might increase your sex drive but that has nothing to do with a testosterone increase. I personally haven't noticed any increase in libido.  I will continue to finish the cycle, but unless I notice any drastic changes in the next 2 weeks, I definitely will not buy again.

It's fine. I don't see any conflicts.- Rob

What is a good product for a woman to lose weight and tone at the same time? -Kia

Check out Instant Knockout. It's a great fat burner that can double as a pre workout energy booster.- Rob

Sure. There's nothing in the stack that's harmful or ineffective for women in particular.- Rob

I'm interested in taking BPI Sports A-HD Elite/Solid Combo 500/550mg Testosterone Booster Capsules. I currently am taking 1.25 mg of Finasteride for hair loss. Would I have any reason to not order this supplement because of the Finasteride. My brother takes it and loves it but I'm just worried about taking it. Thanks for your time and I look forward to hearing from you! -Dominic

Whenever you take prescription medication, you'll need to check with your prescribing doctor before taking any new supplements. I don't have the medical background to know what contraindications there may be.- Rob