What if you could focus for hours at a time on the important work you need to get done today?

And what if you could be confident that your brain is working on all cylinders, making your life better day by day?

This is the promise of supplements like Cerebra Ultra.

I’ve tested several of these nootropic supplements, some of which you can read about here:https://www.supplementcritique.com/nootropic-supplements-weve-tested/

The latest one to catch my eye is called Cerebra Ultra.

What Is Cerebra Ultra?

Like so many nootropic supplements, Cerebra Ultra refers to itself as a real life “Limitless Pill” like in the movie where Bradley Cooper takes a pill that makes him super smart and extremely productive by allowing him to use almost all of his brain capacity.

According to the official website, the benefits of taking Cerebra Ultra are impressive and include:

The primary ingredient in focus within the Cerebra Ultra formula is called Pycnogenol.It’s a proprietary supplement ingredient made from Pine Bark Extract, and according to WebMD,it has several potential uses, including circulation issues and mental function.
The Pycnogenol in Cerebra Ultra improves circulation to the brain, facilitating delivery of the rest of the components in the formula.

It may also contribute to alleviating symptoms of ADD and ADHD, improve athletic stamina, boost your immune system, and even provide anti-stress and anti-aging benefits.

And a 640 mg proprietary blend which includes the Pycnogenol as well as:

All in all, it’s a pretty impressive ingredient list, but it leaves me with one major concern.

While they start off with a massive dose of Vitamin B12 for energy, the vast majority of ingredients – 18 in all, including their highlighted ingredient Pycnogenol – are lumped together in a 650 mg per serving proprietary blend.

This could mean that while the right ingredients are present, they may very well not be present at effective levels.

For instance, 1200 daily mgs of Alpha GPC is the commonly recommended dose.

With a total of 650 mg to work with, it’s unlikely that Cerebra Ultra can deliver enough of the goods to make it worthwhile.

At this point, it’s only sold through their official website.

A single bottle (a one month supply) costs $44.95, and there are discounts if you choose to buy 2 or 3 bottles at once.

You can opt into their monthly autoship program, but unlike so many supplements these days, you have to specifically check the box to enact the program – you’re NOT automatically signed up. 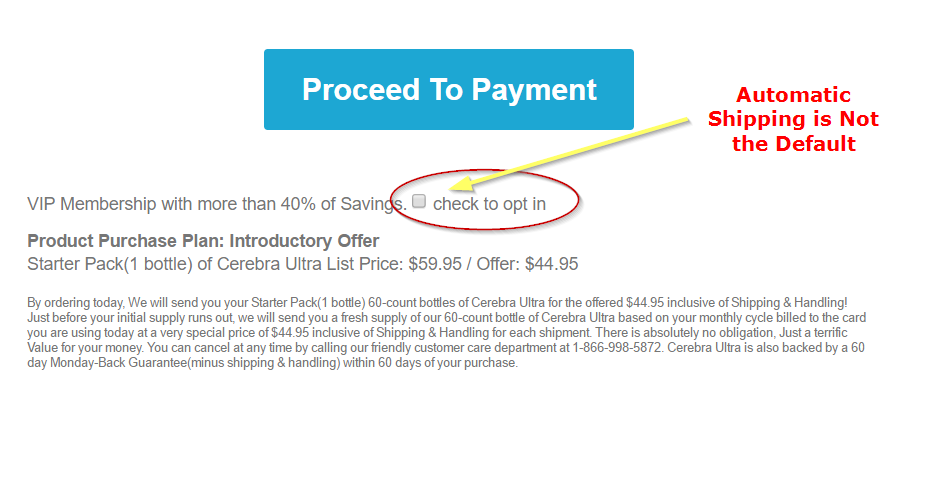 Cerebra Ultra offers a 60 day money back guarantee on all purchases.The website provides instructions on how to proceed if you find it’s not for you.

Without having used the product myself, it’s tough to make a firm call on Cerebra Ultra.

I like a lot of the ingredients in the formula, but the fact that they’re in a proprietary blend means I just don’t know if the levels are sufficient.

Given this, I would imagine you’d get some degree of benefit taking this, but it’s unlikely to be earth shattering.

That said, if Cerebra Ultra catches your interest, I see no reason not to try it.

If it doesn’t work out, you have a full 60 days to get your money back.

Have You Used Cerebra Ultra?