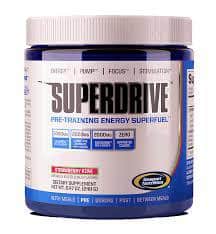 They have a wide range of products available to help you reach your goal, whether it’s to drop 30 pounds of fat, put on massive muscle weight, or both.

Today, we’re looking at one of their preworkout supplements, called Gaspari Nutrition SuperDrive.

The marketing angle is that the preworkout market is saturated with copycat formulas, all using the same few ingredients and getting the same old results.

But that Gaspari Nutrition SuperDrive is different, introducing new ingredients with great results.

Customer reviews of the stuff are pretty mixed, with some guys loving it and others complaining how it clumps or just doesn’t work.

So we broke it down and took a look to see if, new or not, it’s worth your time and money. 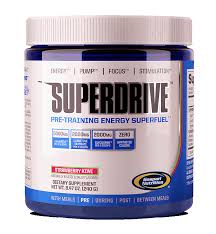 Gaspari Nutrition SuperDrive Ingredients and How They Work

The primary ingredients in Gaspari Nutrition SuperDrive are MitoDrive, GlycoSpan, and Carnipure.

The recommended dose is 1 scoop with 8 ounces of water taken about 20-30 minutes before working out.

Given the price and the reviews, Gaspari Nutrition SuperDrive is definitely worth giving a try.Start with a single scoop to make sure you don’t overdo it on the caffeine.

And if your product gets clumpy, you can toss it in the blender to break it up.

Have You Used Gaspari Nutrition SuperDrive?