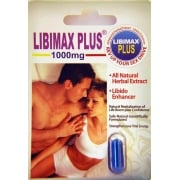 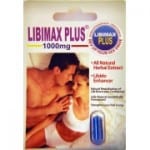 The manufacturer of the male performance product called Libimax Plus has made a lot of claims about this formula.

They say it increases a man’s endurance, the size and firmness of his erection, and improves his stamina.

Naturally, all of these claims made us eager to investigate the product.

We took a close look at the ingredients and labeling, looked for any consumer feedback, considered prices and then made our call about this product.

How Libimax Works and Ingredients

The first thing that struck us was the fact that you are supposed to take the Libimax Plus supplement only once every five days. Was it that powerful, or was it risky?

We looked at the list of “100% Herbal and Natural Ingredients” to determine if there was anything that could be dangerous.

What we found were the standard herbs known for supporting sexual function and male enhancement.

For instance, there was the Ginseng, Shizandra Fruit, and the Cordyceps Sinensis that appeared in almost all other male performance products.

We were pleased to find Arginine and the B vitamins in the mixture too because we know that these would work as vasodilators and mood enhancers.

The use of Arginine, specifically, almost guarantees that even a man with severe ED will feel a difference in function.

This is because it is a material that occurs naturally in the body, but also stimulates the production of NO (nitric oxide).

This causes the arteries to dilate and increased blood and oxygen to reach muscles and tissue.

If you have ever seen a bodybuilder that showed ropes of veins and seemed like he was about to burst you would be looking at the after-effects of NO.

So, just imagine how this functions in the tissue of the penis too.

Of course, the “proof is in the pudding” and so we began looking for consumer reports or user feedback about the Libimax Plus product.

We were immediately startled by the many negative and generally angry posts.

From the calm “didn’t do a thing” to the “what a total ripoff” we realized that the amounts of Arginine and other vasodilators were not enough to warrant the use of the product.

When someone did mention that it had worked, they also rounded out the comments with some of the negative or bad side effects.

One customer had a 24 hour sinus headache they felt was related to using the product and someone else said that it worked but only allowed them to maintain an erection for a matter of minutes.

The cost of Libimax Plus is also another of its “cons” or downsides.

For 30 pills the average cost is $145. This is prior to shipping.Additionally, the product is sold only through a very limited number of vendors, and this can make it difficult to obtain on a consistent basis.

One redeeming feature is that the manufacturer offers a 60 day money-back guarantee, but the lack of a formal or official website makes it hard to know if this guarantee will be easy to access.

Unfortunately, we cannot recommend Libimax Plus as a reliable answer to ED or other erectile issues.

Though it does contain ingredients known to be beneficial to sexual functions, the poor feedback and generally unfavorable reviews indicate that the manufacturer may need to rework the formula that they use for the Libimax Plus product.

We also find the limited number of vendors and extremely high price of the product discouraging too.

Though the product has the appearances of being safe and valid, there are just too many negative issues to allow us to recommend that you use it for a problem associated with ED.

Can purchase libimax at a big drug store.? -Felix

It's only available online.- Rob

4 comments on “Libimax Plus Review”