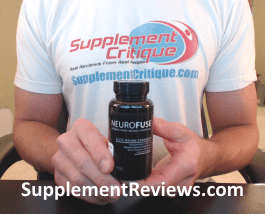 As Americans, we definitely live in a competitive culture. We thrive on winning, and many will do whatever it takes to get an edge over the competition, whether it’s on the sports field, classroom, or boardroom. As such, there has been a surge of supplements on the market that promise to give you mind-altering clarity, focus / concentration, and improved memory.

One such supplement I recently came across is called Neurofuse, which labels itself as a “cognitive enhancer” capable of unlocking your brains full potential. But does it really work? We set out to learn all we could about this supplement, and here’s what we found out.

What is Neurofuse?
Customer Reviews
Is It A Scam?
Dose It Work?
What Are The Side Effects?
Recommendation

Watch My Video Review Below

Billed as an “elite neuro enhancer”, Neurofuse makes a wide array of promises about their product. For one, it’s supposed to help sharpen focus and clarity, as well as boost energy and alertness. It also apparently improves mental performance, and even has the potential to reduce perceived stress and anxiety.

I wonder if it will cook breakfast and do your laundry too? JK 🙂 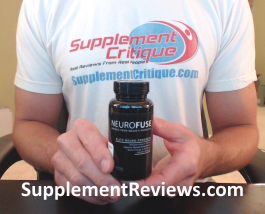 So how does it do all of this? Well, Neurofuse is made up of a blend of 13 high quality ingredients that have been clinically studied (on their own individually) to safely improve memory, focus, and mental performance.

I’m not going to detail what each and every ingredient does here…you can look them up on WebMD or Wikipedia for that. In my expert opinion, I would say that the primary ingredients here would be L-Theanine, Caffeine, and Choline.

I say this because I’ve used these 3 ingredients in conjunction in the past, and had some pretty good cognitive results with it.

Neurofuse has an ABUNDANT amount of reviews on Amazon, with close to 40 at last count. Some of these reviews are actually pretty good, with some stating that it works great for people with Attention Deficit Disorder (ADD) and gives a fantastic feeling of focus.

HOWEVER, the vast majority of the reviews are bad, with some going so far as to stating this is the “worst thing to put into your body”. Apparently, most of the people that are posting negative testimonials feel like they have been bilked by the free trial of the product (more on that below), rather then the product not working at all.

One other thing I noticed was that many of the positive reviewers (here, here, and here) had Neurofuse as their ONLY review on Amazon, which is a classic sign of a fake review.

I did find a “review” on Youtube from a guy named Nick from BrainEntrainment101. I put review in quotes because if you watch it, it’s not really a review. He says that the ingredients in Neurofuse work with your neurotransmitters, but stops short of elaborating on his own personal results with it.

Check it out below:

The other reviews on Youtube were basically worthless, and seemed to be nothing more than a flashy ad for the product.

Lastly, there is some talk about Neurofuse on Reddit, but it doesn’t seem like anyone was speaking from their own personal experiences.

You can find Neurofuse for sale both on their official website, as well as on Amazon. That said, as of this review it’s currently unavailable on Amazon and they’re unsure of when it will be back in stock.

You have several ordering options when getting it on their site, including a 14-day free trial of their product. This free trial is where alot of customer concerns are displayed.

For example, if you read their terms and conditions, you’ll see this:

“Your trial is free, today you will just be charged just for shipping & handling.

You have no obligation to buy anything in the future, as long as you cancel within 14 days of placing your order.

Even if you cancel during your free-trial period, the products are yours to keep and you will not be charged anything else.

No commitments, no hassles.

Most people (including myself at times) tend to skip over the terms and conditions, and as a result, it can come as quite as a shock when you login to your bank and see these charges.

We see free trials like this all of the time, and the vast majority are scams. With that said, there are some companies that are legit when it comes to trials like this. It’s just a matter of finding the right one.

They do offer a 30-day money back guarantee, however, so if you catch it early enough you should be able to get your money back.

It doesn’t appear that they sell Neurofuse in stores like GNC, Vitamin Shoppe, Walmart, or Walgreens, but you may end up seeing it on the shelves eventually.

Is It FDA Approved?

If you’re looking to see if it’s FDA approved, it’s not…That’s because, as a nutritional supplement, it doesn’t require testing by the FDA. As long as theyre not making claims that it is a cure, or is used to treat a particular disease, they can legally sell it over the counter.

However, it IS made in an FDA approved facility, which basically means their manufacturing process has been tested and approved by inspectors.

I have to admit, Neurofuse did give me a bit of a mental edge, at least in the short term. It seemed to hit me after about 30 minutes into my first dose, giving me fairly intense concentration / focus for at least a few hours.

I wouldn’t characterize it as being some “miracle” pill, but I can definitely see it helping around exam time.I felt as though I could get work done at a more rapid pace, and also felt a bit less “scatter brained”.

I only took it for about a week, so as far as long term effects I have no idea what they are.

For me, Neurofuse seemed to cause some mild anxiety (which hit after an hour), which was almost certainly caused by the caffeine. Unfortunately, they don’t tell you exactly how much caffeine it contains, but rather that it’s part of their “proprietary formula”.

I was actually relatively surprised that I even had anxiety, as L-theanine should more or less wipe that out.

Another side effect I noticed was a bit of a crash at around the 4 – 5 hour mark, which left me feeling a bit worn out / fatigued.

I was tempted to try another pill right around this time, but didn’t want to worry about insomnia later in the night.

Personally speaking, I don’t think there are any hidden “dangers” to taking Neurofuse, but it’s definitely a smart idea to consult with your doctor to be sure it’s safe for you to take.

All in all, the supplement looks decent, at least on paper. Is it anything like Adderall?? Not a chance…

It does contain a decent amount of proven herbal nootropic ingredients like L-Theanine, Choline, and DMAE, and combines them with stimulants like Caffeine and Vitamins B6 and B12.

For me, the effects were quite good, albeit I wasn’t a big fan of the side effects. At $45 a bottle it’s not very expensive, so it has that going for them.

While some guys may fret about the free trial and consider it a rip off, as long as they honor customer refunds as part of their guarantee you should be good to go.

However, based on the negative feedback I’m seeing on Amazon as to whether or not it works, coupled with the fact that many of the positive reviews appear to be fabricated by the company, we say take a pass.

Have You Used Neurofuse? Leave Your Review Below!

Do not buy, does not work, terrible company

Do not buy this product. The effects are what you should expect from a coffee and nothing more.  Alternatively, I have tried another comparable supplement and actually felt good results.

Worse yet is the company. I did a trial.  I later decided the product didn't work, but by then they had charged me for an $80 monthly supply. I called to tell them I didn't want the product, they said I could just ship it back and they would refund me. 3 weeks later I call about the refund.  The company says because I failed to put some MRE number on the package, they are unable to give a refund. In my two prior calls, never was there a mention of an MRE number I needed to put on.  Long story short, they have their shitty product back, and I am out the $80 with them offering no help whatsoever.

This is a terrible slimy company, and there are far better products out there.