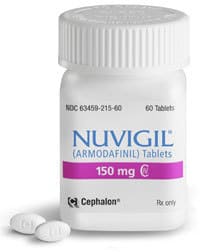 Ever see the movie Limitless, where Bradley Cooper plays a washed up writer, who’s girlfriend just broke up with him because he’s a slob and can’t get anything done? Once he takes a drug called NZT48, all of a sudden, he can do anything. He writes a book in a day and makes a killing in the stock market. It’s a decent movie you should go see if you get the chance. But why are we talking about it here? Because it brings to mind the question of whether or not there’s a drug out there that can do what NZT 48 does.

Well, the answer is “Yes and no.” There are drugs and supplements that can actually help your brain function at peak levels. They’re called nootropics, but they’re also known as brain boosters, memory enhancers, and ADD/ADHD alternatives. There are lots of different kinds, and they all work a bit differently. Today the one we’re looking at is called Nuvigil. 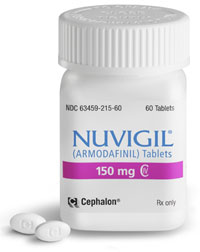 Nuvigil is a form of Modanafil. Available by prescription only, it is used to promote wakefulness for people diagnosed with Shift Work Disorder, Sleep Apnea, and Narcolepsy. While it is not chemically related to amphetamines, there is a possibility of dependence, which is the primary reason that it is a controlled substance.

Nuvigil as a Nootropic

In addition to increasing wakefulness, Nuvigil is known to improve the brain’s cognitive capacities. It increases memory and recall, while causing you to think more quickly and clearly. People who’ve used it report that it allows them to get a lot more done than usual, and that studying and creating are much more easily accomplished.

Again, use of Nuvigil requires a prescription. Your doctor will prescribe the correct dose for your needs. Every day use, especially not supervised by a doctor, can lead to dependence, so you’ll need to be aware of that.

Nuvigil is generally considered to be fairly safe with the most commonly reported side effects being headaches and nausea. Nuvigil has also been associated with severe and possibly fatal skin rashes and suicidal thoughts.

Where to Buy Nuvigil

As a controlled substance, Nuvigil is only available with a prescription from your doctor.

Nuvigil is a FDA regulated drug that promotes wakefulness for people who suffer with sleep apnea, narcolepsy, or shift work disorder. Even though it can also be used as a cognitive enhancement, we would advise against that because of the dual potentials of serious side effects and addiction.

Have You Used Nuvigil? Leave Your Review Below!