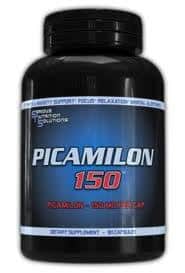 I’ve been asked a lot lately about brain boosters, memory enhancers, nootropics, and any other kind of cognitive enhancement supplement you can think of. These products really seem to be taking off, and lots of people are looking for information to help them decide whether or not they should take one, and if so, which one.

Like a lot of others, Picamilon was developed in Russia and is available there only by prescription. But that’s pretty much where its similarity to others ends. Picamilon is kind of a hybrid. They call it both a tranquilizer and a stimulant, and rather than being used to sharpen your mental focus and ability, it is used to calm anxiety and relieve symptoms associated with stress and depression.

However, I have noticed that combining substances like Picamilon along with a stimulant like DMAA or caffeine, the nootropic effect is incredible.

The primary component in Picamilon is called N-Nicotinoyl. It’s a combination of Niacin and GABA (Gamma-Aminobutyric Acid. Because it’s configured as a combination, it crosses the blood-brain barrier easily which makes it more potent than the two ingredients taken separately. It improves circulation and lowers blood pressure, and stimulates the GABA receptors in the brain.

In Russia, Picamilon is prescribed for:

Here in the states, it is most commonly used as an over-the-counter remedy for anxiety. Unlike most supplements in the nootropic category, Picamilon is more about mood enhancement than cognitive improvement, though some people do report a greater degree of clarity.

How to Use Picamilon

Picamilon generally comes in the form of capsules of 50 mg or 150 mg strength. The most commonly recommended dose is 150 mg taken twice a day, though most people experiment until they find the dose that works best for them.

What people say about Picamilon varies widely. Some users have experienced real mood elevation and less stress, especially in social situations. Others report that they’ve had no positive effects, but have notice nausea and/or difficulty sleeping.

Picamilon is generally considered safe, though it is stated that long term use could lead to low blood pressure.

It is also stated that it should not be used with other vasodilators, including herbal ones like Ginkgo Biloba.

Picamilon is pretty widely available through online supplement stores. You can get a 90-count bottle of 150 mg capsules for about $20.

If you’re looking for something to help you relieve depression or anxiety, this product may be worth giving a shot. But if your search is for something that’ll help you think, concentrate, and remember better, you should probably pass on Picamilon.

Have You Used Picamilon? Leave Your Review Below!

picamilon definitely was not what I expected. It is not like phenibut which causes sedating and relaxing effects.  I also got no nootropic benefits. Overall disaponted