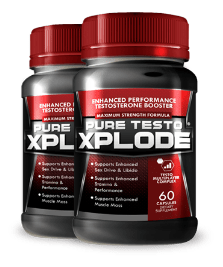 We come across dozens of testosterone boosting supplements every week, and I’ll be honest it’s pretty hard to keep track of all of them. One recent one I stumbled across while browsing my facebook page was none other then Pure Testo Xplode. In the particular ad I saw, apparently celebrities are using this supplement along with another one called Black Label NO, which is a pre workout supplement.

So is this combo really some fat melting, abs bursting, muscle building “miracle in a bottle”? No….and you’re going to find out why very shortly. Read on to learn more.

What is Pure Testo Xplode?

According to the products official website, Pure Testo Xplode is an “enhanced performance testosterone booster” that is designed to help you achieve better muscles, increased stamina, and maintain peak performance when you need it. If I had a $1 for every time I read that claim I could probably retire haha. 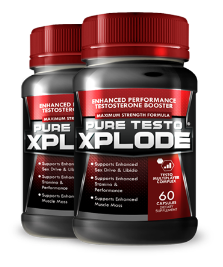 They market themselves as one of the #1 testosterone boosters on the market, and make claims that there are no harmful side effects and the ingredients are safe and scientifically tested. That’s great and all, but the biggest problem we have with that statement is….what are the ingredients?

I scoured dozens of other sites, looked for a picture of the label, and even sent the company an email asking them what the ingredients are, all without an answer. The only ingredient that I am aware of that “might” be in Pure Testo Xplode is Tribulus Terrestris, and the only reason I suggest that is because they mention clinical studies of it at the bottom of their sales page.

But that’s literally it…no mention of anything else.

Our Problem With Pure Testo Xplode

Our biggest problem with this supplement (and dozens of others) is the deceptive marketing and free trial they use to lure unsuspecting customers in. You see, when you sign up for the free trial, you are indeed just signing up to try the supplement out.

They claim they are sending you a sample bottle, but nothing can be further from the truth. As you can see here, when you go to enter your credit card information to pay for the shipping charge of only $4.97, you probably missed the fine print at the bottom of the page.

It says, “By submitting, you consent to having read and agreed to ourTerms and Conditionsand after your 14 days trial period has expired, being enrolled in our membership program for $119.97 plus shipping per month.You can cancel anytime by calling 1-855-511-2251.”

Think about that for a second…$140 for a bottle of supplements! That has to be the most expensive supplement I have ever heard of, and I’ve bought THOUSANDS of dollars worth of supplements over the years.

This is what’s known in the industry as an auto-rebill, auto-shipment scam, and there’s literally hundreds (possibly even thousands) of other companies that do it.

Check out this video the FTC posted, warning consumers about this practice:

And that’s not all…

Let’s be honest, what go you here in the first place was you were probably browsing some social media site like Facebook or Twitter, and came across an ad like this. It mentions some miracle combination of supplements that celebrities, athletes, and movie stars are using to get in peak physical condition.

You click on the ad and it takes you to a farticle (fake, article = farticle), which seemingly looks like the Men’s Health website. It chronicles the investigation into a new “steroid alternative” that boosts muscle growth some 200%.

You read through and there’s images of celebrities like the Rock, Chris Helmsworth, and Gerard butler, who have all apparently used a combination of Pure Testo Xplode and Black Label NO (<–well get to this one in a minute).

Here’s a few of those images below: 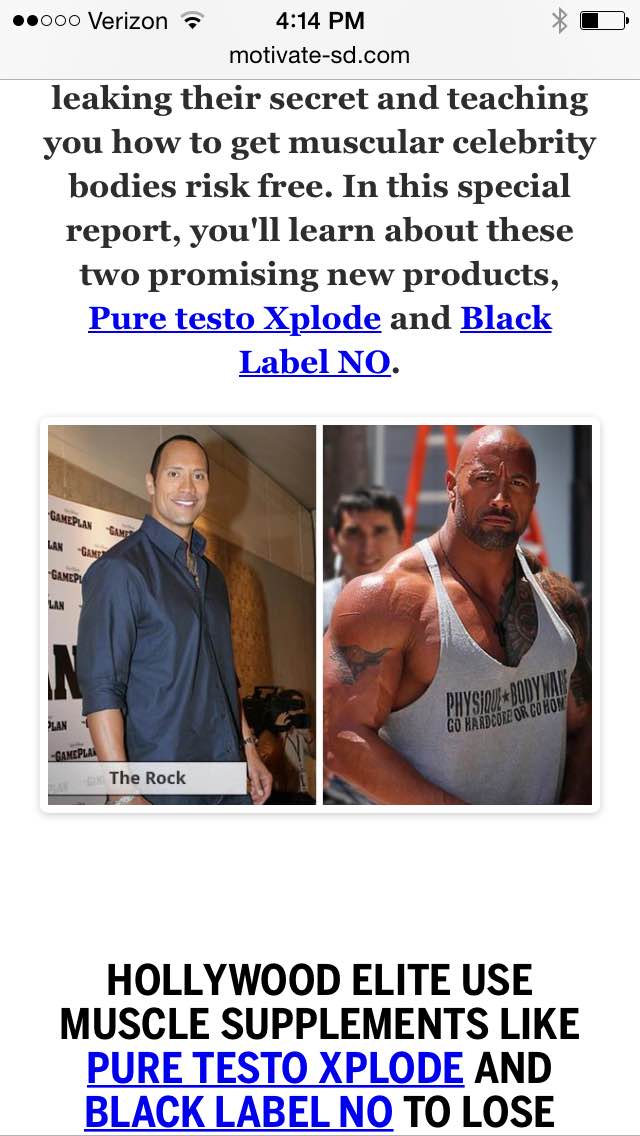 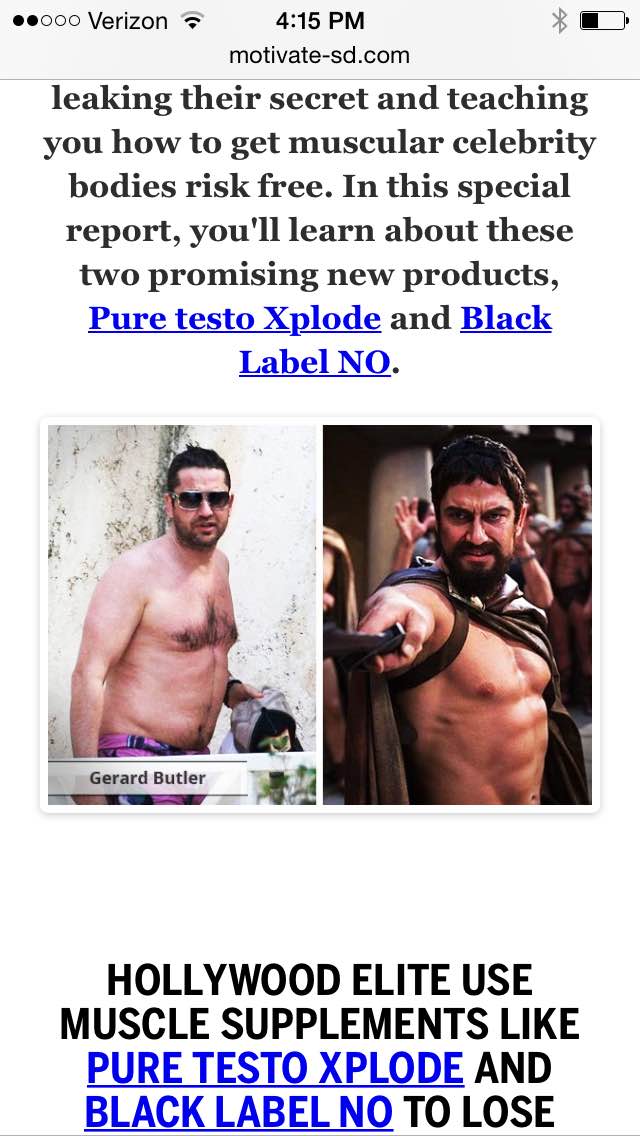 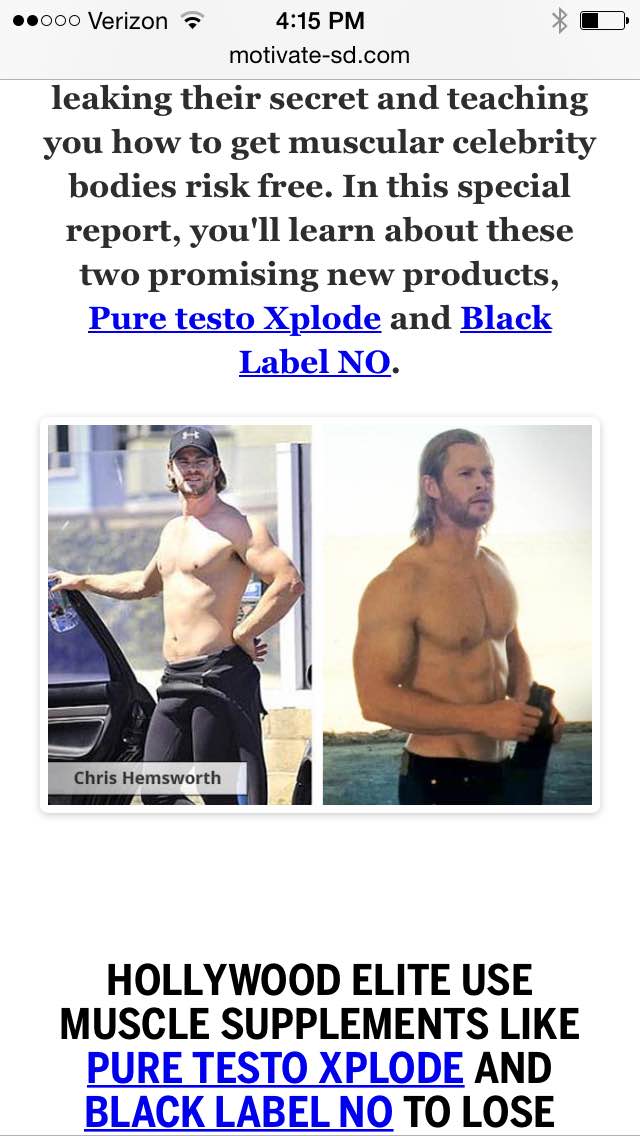 This is complete and utter B.S. How do I know this? Well, first off, look at the website in the top of those photo’s. It doesn’t say menshealthandlife.com, it says motivate-sd.com. This ALONE proves that it’s not the Men’s health site, but rather one trying to pass off as one.

Second, check out this post, this post, and this post, and you will see that the celebrities mentioned above have all apparently been using those supplements too. The truth of the matter is they are NOT using these supplements, including Pure Testo Xplode, they just are using their likeness to promote their brand, without their knowledge of course.

I just stumbled across another celebrity being used to tout this combo…Floyd Mayweather Jr. I was browsing through my Facebook page when I came across an ad saying he was being stripped of his title for using a controversial (yet, not illegal) substance.

That substance…none other then the combination of Pure Testo Xplode and Black Label NO. Here’s a screenshot below: 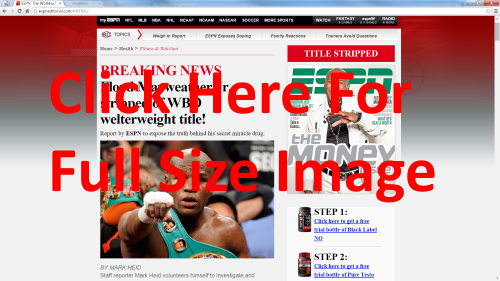 This time, staff reporter “Mark Heid” apparently investigated (and tested) some weird supplement combo that got Floyd Mayweather into this mess. The problem with this story?? It’s complete bullshit…

Floyd Mayweather Jr.WAS stripped of his titles in early July 2015…HOWEVER, the REAL reason he was stripped of them is NOT because he was taking Pure Testo Xplode and Black Label NO.

Rather it was because he failed to vacate the 2 other titles he held. According to the WBO world championship organization, it is against the organizations rules to hold world titles in multiple weight classes. The WBO gave Mayweather close to 2 MONTHS to decide which title he wanted to hold, and because he didn’t comply with their request they stripped him of his titles.

You can read the full story on the REAL ESPN website here.

A Note On Black Label NO 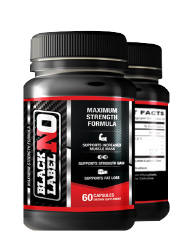 As mentioned earlier in this review, Pure Testo Xplode is apparently most effective when combined with another supplement called Black Label NO. If you still think this is the case then I think you need to get your head examined, but I wanted to briefly touch on the product to help you learn more about it.

Black Label NO calls itself a “maximum strength formula” and is apparently designed to help support increased muscle mass, strength gains, and fat loss. Just like Pure Testo Xplode, Black Label NO does NOT divulge any of the ingredients in it’s formula, but if I had to guess it probably contains some variation of L-Arginine, a couple of amino acids, as well as a stimulant or two.

Also, the only way to buy it is….you guessed it, via a free trial. And wouldn’t you know it, the terms and conditions of Black Label NO are nearly IDENTICAL to that of Pure Testo X Plode, costing you $140 if you don’t cancel your trial within 14 days of ordering your “sample”.

Pure Testo Xplode has got to be the biggest scam supplement I’ve come across in recent times. The fact that they have a free trial is typical. Lots of companies do it, and many of them run a legit operation. But the enormous price tag of this supplement leads me to believe they have other motives which don’t involve helping you get in shape.

Run…don’t walk from this one!

Have You Used Pure Testo Xplode? Leave Your Review Below!

When stacking a pre workout and a testosterone booster, you'll want to follow the instructions provided by the manufacturers.- Rob

4 comments on “Pure Testo Xplode Review – Does It Really Work?”