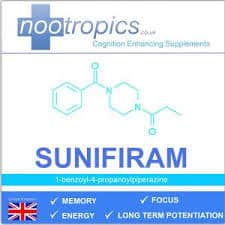 Sunifiram is one of the newer nootropics on the market, and as such should probably not be the first one that anyone experiments with. It’s been studied somewhat extensively in rats, and it shows some real promise, but official human trials have not yet taken place. But since most nootropics are considered safe and they’re available over the counter, there’s plenty of anecdotal evidence out there or how and how well it works. 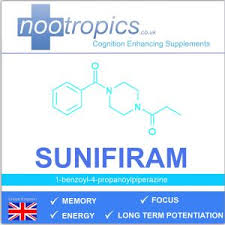 The original nootropics were racetams. Sunifiram is closely related to racetams, but is technically an ampakine because its primary mechanism of action is on AMPA receptors. It also works to help the release of acetylcholine (another neurotransmitter in the brain).

Briefly so as not to get too mired down in the scientific talk, Sunifiram stimulates AMPA receptors in the brain. These AMPA receptors are responsible for releasing Glutamate, a very important neurotransmitter for memory and making cognitive connections. Sunifiramalso stimulates the release of Acetylcholine, another neurotransmitter, this one responsible for alertness, perception, and focus.

Okay, so the science can get a little dry. What we really want to know is what does Sunifiram do and should we use it. So let’s get to that.

Sunifiram shows promise as a potential treatment for Alzheimer’s Disease because of its effect on memory. In the rat studies, it was shown to reverse the effect of drug-induced amnesia. Off the record human experimentation has shown the same. People who’ve taken Sunifiram say that there are real cognitive benefits and that the dose required to get those benefits is far lower than it is for the original racetam, Piracetam.

The effects most commonly reported are:

Sunifiram appears to have a low toxicity level, just like most other nootropics. Again, there have not been clinical trials performed on humans, so more information regarding side effects may yet come to light at some point

One of the biggest potential advantages to Sunifiram is its potency. Whereas you might need to take hundreds of mg of Piracetam or the like, you’d take only a tiny fraction of that if you’re using Sunifiram. Between 5 and 10 mg seems to be the most common dose we found.

Sunifiram definitely shows promise. The fact that it works on two different types of neurotransmitters is a big plus, and the testing on rats with memory loss is looking very encouraging. Out biggest concern is that it is too new and untested on humans. I’d recommend you wait a while on this one. Wait till Sunifiram is further tested and lives up to its promise.

Have You Used Sunifiram? Leave Your Review Below!