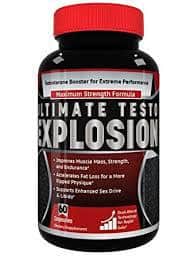 If you’re a guy in your late 30s or older, here are lots of reasons to think about taking a natural testosterone boosting supplement.

You may be starting to put on extra weight in your midsection, you may be having a hard time getting results at the gym (or getting yourself motivated to get there in the first place), you may be feeling more fatigued and moody than you used to, or you may even be starting to notice a drop off in your libido – something you probably never imagined could happen.

Declining testosterone levels could indeed be the culprit.

When you were a teenager, you had more testosterone than you knew what to do with (literally).

But once you hit your early to mid twenties, levels started to slowly decline – nothing noticeable at first, but once you get to about thiry-five to forty, the signs begin to show themselves.

Of course the fact that so many of them are little more than scams doesn’t help either.

But I’ve researched and tested dozens of contenders, so at this point, I feel quite comfortable with my ability to distinguish the real thing from the fakes.

And that brings us to Ultimate Testo Explosion.

What Is Ultimate Testo Explosion?

In a nutshell, Ultimate Testo Explosion is a natural testosterone boosting supplement you can buy online. The results it promises are typical for pills of its kind, and include both muscle building and sexual benefits:

Of course, those are just the promises.

What we really want to know is whether or not it delivers and provides value, and in order to figure that out, we checked into the formula, customer feedback, any scientific studies, the price point, and the customer service to back it all up. Only then did we feel we had the full story and were ready to tell it.

The Ultimate Testo Explosion formula is broken down in to 2 proprietary blends – The TestoACTIVATE Blend and the TestoEXTREME Blend – each of which include testosterone boosting components.

The TestoACTIVATE Blend is made up of:

Two things about the formula jumped out at me immediately.

The first was that there really aren’t any powerhouse ingredients.

You’ve got the typical Tribulus Terrestris, Fenugreek, and Tongkat Ali, but no D Aspartic Acid, no Zinc, no L-Arginine – all quite commonly found in effective formulas.

The second is that no EXACT ingredient amounts are provided.

Without this information, it’s impossible to tell if there’s a full, effective dose, or just a dusting of any particular ingredient.

All too often, supplement companies will use just a dusting to give themselves the ability to claim an effective ingredient, but really the amount is just too small to have any real effectiveness.

How To Use Ultimate Testo Explosion

You are encouraged to take 2 capsules once per day with a full glass of water.

If it causes upset stomach, take it with a small amount of food.

Not a chance in hell, read this.

While it’s true that Ultimate Testo Explosion is only sold online, in addition to its official website, it’s sold on Amazon.com as well.

This is great news because when a product is sold on Amazon, there’s a good chance there will be Amazon customer reviews.

You may have heard that there are some fake Amazon reviews out there, and that can be true, but the company does attempt to contain the issue, and it’s still one of the best places to see unadulterated, truthful product feedback.

Related Article: How To Spot a Fake Amazon Review

We checked out the Ultimate Testo Explosion reviews on Amazon, and it turns out the news is NOT good.

I’m not sure I’ve ever seen this high a percentage of horrible reviews. 78% are not just negative, but the most negative possible – 1 STAR!

The reason for the bad reviews is made clear very quickly.

From Todd: “Didn’t notice anything different when using the product”.

From Tyrone: “Total rip off… I took all the pills as directed and this product does not work at all… I have not lost a pound.

DO NOT WASTE YOUR TIME”!

The only reason there is a star is because it’s required.”

The negative reviews are not about side effects or negative reactions.

They’re just about the fact that it doesn’t work.

Of course, there are a couple positive reviews as well.

Most are just quick notes to say it works, but this one went a little further:

“All these negative comments, it works just fine, but you have to eat right and exercise, not just sit on your butt.

I’m a bodybuilder and noticed changes about 15 days in.

Not to mention where it counts, If you know what I mean. So don’t listen to the negative.

Actually most of our bench team uses this.

And we have been dominating up here in MN.”

Basically this guy’s point is that you can’t just take it and think it will magically make you ripped or turn you into a stud.

You see that a lot from users who get better results than others when using a supplement.

They tend to assume everyone else must be using it wrong.

But the numbers here don’t lie.

Where Can You Buy It?

We touched on this a little bit earlier, but there are 2 ways to get your hands on Ultimate Testo Explosion.

You can buy it straight up from Amazon.com for $74.99 a bottle, or you could sign up for what they’re calling a “free trial”.But be forewarned, this trial is anything but free.

Here’s how they draw you in: 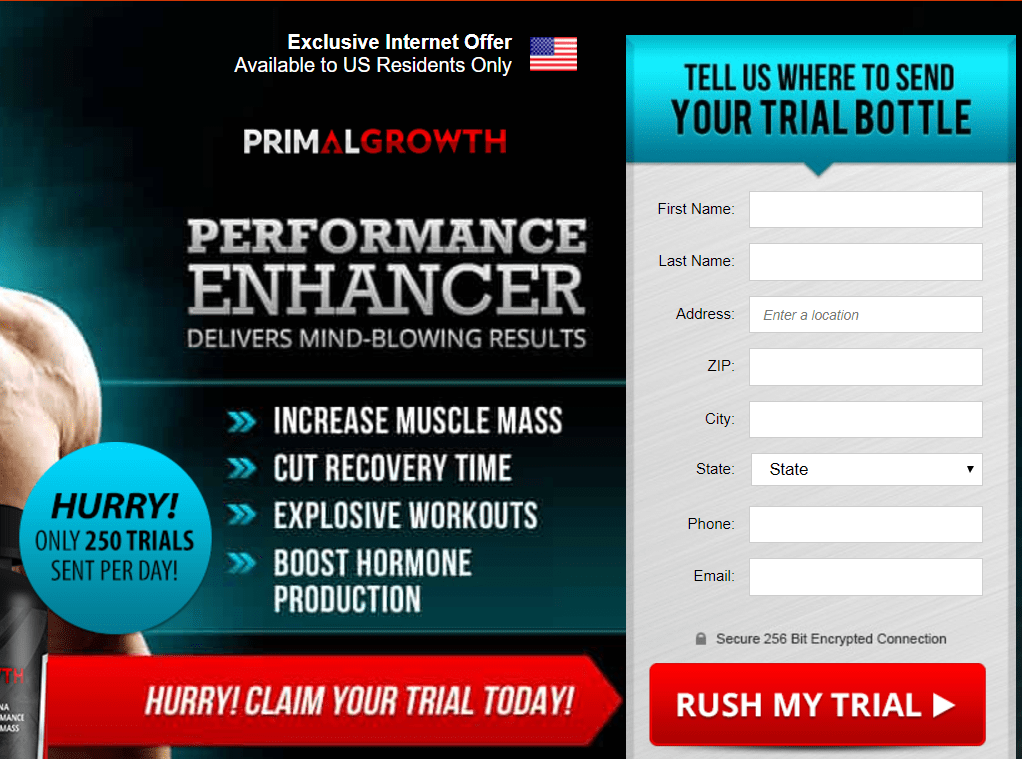 Then when you enter your name and information and click through, this is where you think you’re getting confirmation that it’s “free”” 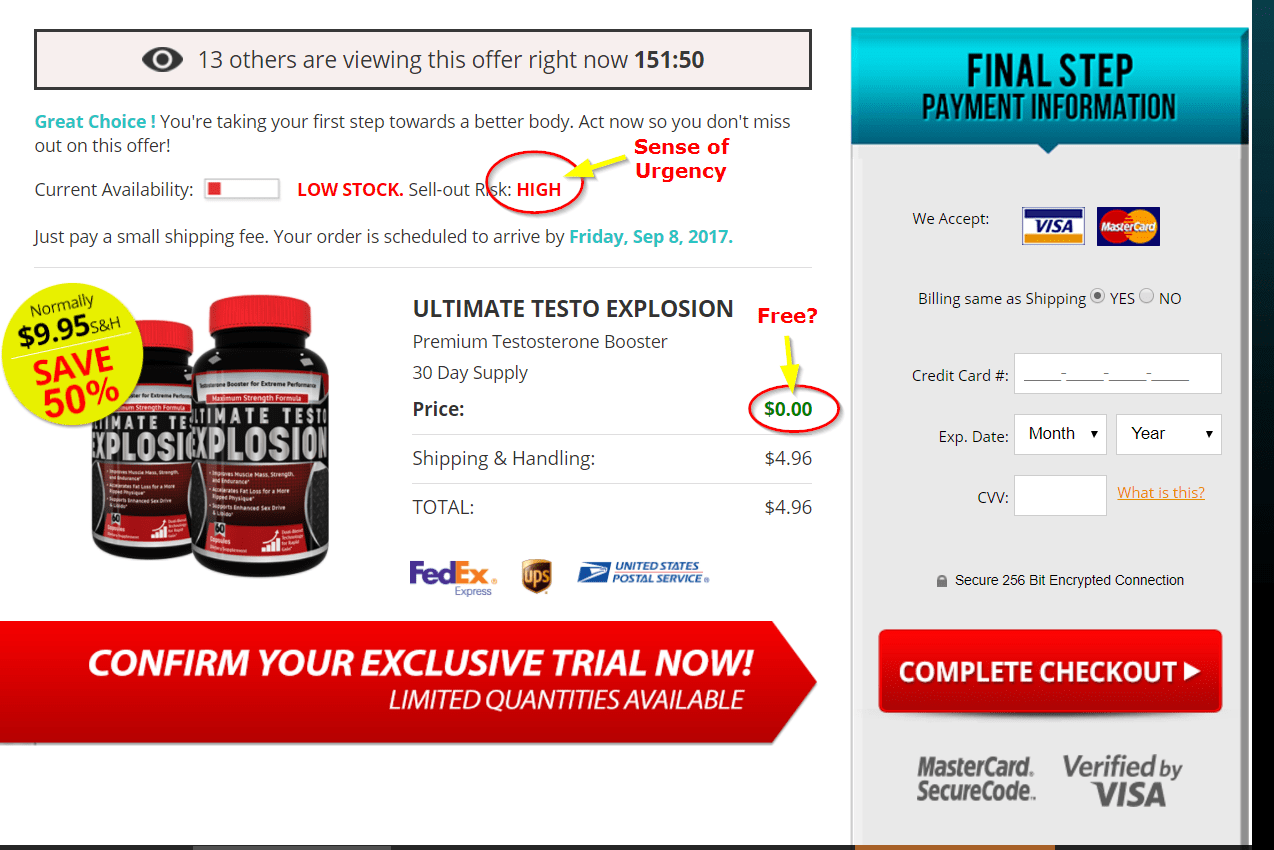 You can scour through all the information on this page and not see any evidence that your purchase of Ultimate Testo Explosion is not free. And tons of guys do this every day.

It appears to be very clear that you’re signing up for a free one month supply for only the cost of shipping, and that that’ll be the end of it.

But this is not at all the case.

The only way you’ll know the truth is if you find and read the Terms and Conditions document.

That’s the only place the actual facts of the deal are laid out.

Here’s what it says:

Basically, how it works is that you initially pay only the small shipping fee, and they send you a full one-month supply bottle.

This part is made pretty clear to everyone.

After that, unless you contact the company within 14 days and inform them that this is not what you want, they will charge you $98.49 for the “trial” bottle that you’ve already received “for free”.On top of that, they’ll send you a new bottle at that same price every month until you do finally cancel.

If you do call within 14 days, you have two choices.

You can return the what’s left of the bottle (presumably about 2 weeks worth of pills) and be charged nothing, or you can keep the bottle and pay a $9.95 “retention fee”.I’m sure most people choose to pay the retention fee because they would have to pay that much or close to it to ship the half empty bottle back anyway.

This “free trial” scam is extremely common within the online supplement industry.

You can read about it in much more depth in my article: Free Trial Supplement Scams – The Ugly Truth But the Retention Fee for keeping the bottle is new to me.

We started off this review saying that there’s good reason for men over 35 or 40 to start using a natural testosterone boosting supplement.But there’s such a wide variety of options that the one you choose will really make all the difference.

The evidence of this can be found in the customer reviews on Amazon.com, which are some of the worst I’ve ever seen. It’s hard to ignore this kind of widespread agreement about how bad this stuff really is.

Honestly, that should be enough to convince you not to use it, but when you add in the phony “free trial” offer that locks you into monthly $100 payments, it becomes even clearer.Stay away from Ultimate Testo Explosion.

There’s literally no reason not to.

Have You Used Ultimate Testo Explosion?