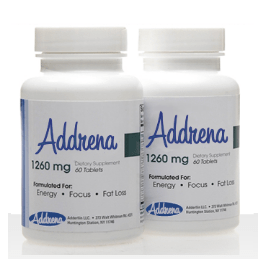 The Addrena website describes Addrena as “an over the counter Adderall substitute“ pill that helps increase focus with a unique blend of natural vitamins and herbal stimulants that have powerful effects.” In other words, it is a nootropic supplement that is intended to enhance focus, concentration, alertness and energy.

Adderall, which is a prescription drug used to treat attention-deficit hyperactivity disorder (ADHD), has garnered considerable controversy pertaining to its side effects.

Its substitute, Addrena, has also been the subject of much criticism.

A lot of people find their way to products like Addrena and other similar nootropics because they are looking to go around the hassle of obtaining a hard to get Adderall prescription or simply want to avoid the negative side effects that have come to be known from taking it.

In an effort to provide you with a balanced review of Addrena, we performed a significant amount of research to help you decide whether this nootropic is for you.

What is Addrena?
How does it work?
What are the ingredients?
Addrena Vs. Adderall
Potential side effects
What the reviews say
Pro’s and Con’s
Where to buy
Conclusion 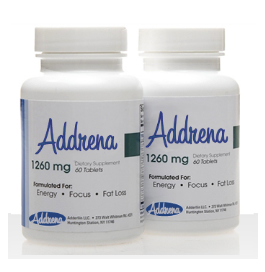 The supplement’s main purpose is to:

Addrena is meant to provide that extra boost needed to get tasks done efficiently, while encouraging weight loss through its thermogenic and appetite suppressant effects – without the severe side effects of prescription ADHD drugs.

Addrena may be useful for studying, writing papers, and other tasks that require concentration.

Addrena works by boosting the flow of neurotransmitters, dopamine and epinephrine in the brain; by incorporating a synergistic blend of vitamins, natural stimulants and nootropic cognitive enhancers that imitate powerful ADHD medications; and by increasing the body’s core temperature via metabolic stimulation.

Neurotransmitters are brain chemicals that send data throughout the body and brain.

Dopamine is a neurotransmitter, or chemical messenger, that plays a crucial role in humans and animals.

Its functions are related to movement, memory, pleasurable reward, behavior, cognition, attention, sleep, mood and learning, among others.

Deficiency or excess of dopamine can result in serious conditions, such as Parkinson’s disease and drug addiction, respectively.

Epinephrine, also known as adrenaline, is a hormone generated by the adrenal medulla, which is the inner part of the adrenal gland.

The body contains small amounts of epinephrine, which is vital to maintaining cardiovascular stability.

Epinephrine is released into your bloodstream when you experience intense emotions, such as anger and fear, which cause your heart rate, muscle strength, sugar metabolism and blood pressure to rise.

By effecting neurotransmitters, dopamine and epinephrine, Addrena helps to increase focus and concentration and improve mood.

This is very similar to Adderall, Ritalin, Vyvanse or any other similar stimulant based pills operate and thus, in theory, it should work similarly.

These thermogenic effects stimulate the metabolism and increases generated heat in the body, leading to fat loss.

What Are The Ingredients?

Addrena contains an extensive amount of ingredients, including:

Ingredients that are not displayed on Addrena’s label but are indicated on the manufacturer’s website include theophylline, octopamine, synephrine, theobromine and yohimbine hydrochloride.

To fight symptoms of ADHD, Adderall uses a combination of synthetic amphetamine and dextroamphetamine salts.

The drug works by increasing the flow of neurotransmitters in the brain – this process calms behavior and helps facilitate focus.

Journalists, college students, baseball players, scientists and other individuals have been known to use Adderall to improve attention, learning, memory, concentration and productivity.

The prescription drug, however, has a high potential for abuse, and other possible side effects such as rapid heartbeat, feelings of extreme highs and lows, hallucinations and muscle twitches.

Giurgea, who originally synthesized Piracetam and coined the term “nootropic” established “very few side effects” as one of the criteria for nootropics.

A true nootropic therefore has very limited or zero side effects.

Addrena is marketed as a substitute to Adderall, containing natural ingredients that provide similar effects to Adderall but without the side effects generally associated with the prescription drug.

While some users report positive experiences with Addrena, some nootropic reviewers claim that Addrena can cause serious side effects.

Addrena is intended to be free of side effects and safer for long-term use than Adderall, but it has been heavily criticized by reviewers for containing dangerous properties.

The general consensus on this issue is that the chemicals in Bitter Orange and Yohimbe Bark pose hazardous health risks.

The National Center for Complementary and Integrative Health (NCCIH) states that Bitter Orange has been used in traditional Chinese medicine and by some indigenous people for indigestion, nausea and constipation.

However, the NCCIH notes that it may not be safe to use as a dietary supplement because it contains chemicals that accelerate the heart rate and increase blood pressure.

With regards to Yohimbe, the extract is said to be generally well-tolerated when taken in low doses, but excess usage can lead to rapid heart rate and increased sweating.

In addition, according to an FDA investigation of dietary supplements, of the 275 calls made to poison centers, 18 percent involved products that contained Yohimbe.

Yohimbe is banned in several countries, such as Great Britain, Canada, Australia and the Netherlands.

It is legal in the US, however, where it is sold under various brand names.

What Do The Reviews Say?

Reviews of Yohimbe from the general population are extremely mixed.

Some people have high praises for the supplement, stating that it “works as advertised” or it “increases focus without crash or insomnia.” Others say that it “didn’t do much” and does the same thing that a cup of coffee would do.

Notably, some users claimed that the product comes with a message promising customers a free bottle of Addrena if they leave a positive review.

How To Take It

Because this is a powerful supplement with Adderall-like effects, the recommended dosage is one pill per day – though some people take 2 per day, spacing out the time frame.

Addrena should not be taken with caffeine, as it already contains potent stimulant properties.

Traditional stores, such as Walmart, Rite Aid, GNC, CVS and Walgreens do not sell Addrena.

It is sold via the manufacturer’s website or through the company at Amazon.com.

Addrena costs $39.99 per bottle, which has 60 pills, generally lasting up to two months (if you take one per day).According to the manufacturer, the cost is much less than the price of comparable products which have far less mgs than Addrena and do not provide strong results.

You don’t need a prescription to buy most nootropics, but since they are health-related, it’s always a good idea to consult with your physician before taking them – and Addrena is no exception.

Based on our research, the cons of using Addrena outweigh the pros.

For the most part, the manufacturer’s website is informative, but it does not address reported side effects, simply stating that the product does not carry the side effects associated with prescription medications such as Adderall and Ritalin.

People respond differently to nootropics, based on their body chemistry.

Therefore, Addrena users may, or may not, experience side effects.

But with the significant amount of controversy that surrounds the use of Addrena, potential side effects are worthy of note.

Considering that one of the key components of Addrena – specifically Yohimbe – is banned in several countries and there are quite a few warnings concerning Addrena, we cannot unequivocally recommend the supplement.

Have You Used Addrena? Leave Your Review Below!

That's really a question for your doctor. Let them know what the ingredients are and see what they say. They'll know what potential interactions there may be.- Rob

Is this product good for a child of age 9 with adhd? -Amanda

No, not at all. Most supplements are not recommended for anyone under 18. Please read the review above. Addrena contains Yohimbe, which can often cause significant side effects in adults. You don't want to give that to a child.- Rob