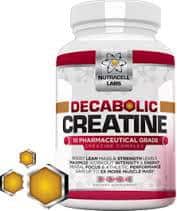 Home » Creatine » Decabolic Creatine Review – Should You Use It?

For all the apparent controversy over using it, creatine is the most widely studied bodybuilding supplement there is.

Although some people don’t like the way it causes water retention, it’s well accepted in the community that for putting on muscle, it works. That’s in the general sense.

But in the more specific sense, there are so many different kinds of creatine, how do we know which is right for us.

Decabolic Creatine attempts to solve that dilemma by providing you with fully 10 different kinds at once.

It comes from a company called Nutracell Labs that makes several other bodybuilding supplements as well.

The potential draw of Decabolic Creatine is that by combining several pharmaceutical grade types of creatine, you’ll be providing your muscles with more than sufficient ATP that gets converted to fast twitch muscle energy, which you can use as the quickest way to increased muscle strength and size. 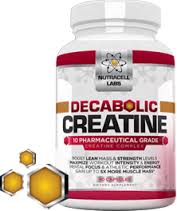 Decabolic Creatine Ingredients and How The Work

We haven’t been provided with a complete ingredient list.

What we do know is that the formula is primarily if not exclusively made up of the 10 different kinds of creaine, including:

The standard dose is 1 scoop of Decabolic Creatine mixed with water.

During the 4 day loading phase, take 1 scoop 4 times a day, spread throughout.

After that, take one scoop daily to maintain sufficient creatine levels.

You can purchase Decabolic Creatine through the Nutracell website or a few other online retailers like Amazon.

The price for the 45 serving tub is about $55. They tout a guarantee, but it’s not an actual guarantee that involves money.It’s just a promise that Decabolic Creatine is good stuff.

Creatine is one of the best ways to push your workouts to the next level and gain some real strength and size. Decabolic Creatineprovides creatine to be sure, but it’s not clear there’s anything to particularly recommend this combination of creatines.

It’s simply guesswork that if one is good, ten must be better.

Ultimately though, I just don’t see Decabolic Creatine as worth the money.

There are plenty of creatine based supplements that give you more of it or at least work in concert with other ingredients that contribute to the best possible pre workout routine or post workout recovery possible.

Have You Used Decabolic Creatine?

I used this product for over a year. I continue to us it.  It has boosted my output. I have no water retention.  It is good to mix in with a 1/2 pint milkshake.

How much is this product in rand? -Thabo

It looks like it's only sold on Amazon at this point. You'd have to check with them about where they ship to and how much the price is in your country.- Rob

2 comments on “Decabolic Creatine Review – Should You Use It?”