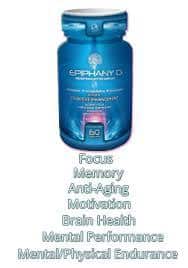 Home » Nootropics » Epiphany D1 Review – Should You Use It?

Turn your potential into prosperity. That’s what Epiphany D1 says it can do. A couple of years back, there was a movie called Limitless, where a lazy, down-on-his-luck guy (played by Bradley Cooper) took a pill and all of a sudden became smart, motivated, focused, and energized to the point where he made a fortune in the stock market one morning and wrote a novel that afternoon.

Nootropics have been around since long before Limitless, but their popularity has increased exponentially since its release.

Epiphany D1is classified as a nootropic stack. That means it combines several different mind enhancing components in attempt to provide the most complete benefits, including: 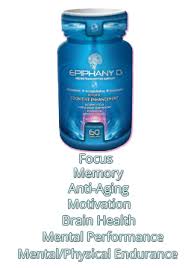 Epiphany D1 Ingredients and How They Work

Lots of the nootropics we look at are single ingredient supplements. Epiphany D1 is a stack so it includes several of those as well as some other nutrients and herbal ingredients. A list of the highlights includes:

Epiphany D1 is also rounded out with Chromium, B Vitamins, Folic Acid and Zinc to help provide the nutrients the brain needs to function more seamlessly.

The recommended dose of Epiphany D1 is1 to 2 capsules taken twice a day, 5-10 minutes before eating.

You can purchase Epiphany D1 through the official website. There’s a trial package of 10 capsules for $19.95 or a 60-count bottle for $64.95. Buying in bulk will result in a small discount.

There are so many different ways to go if you’re wanting to enter the world of cognitive enhancement supplements. Epiphany D1 uses the approach of stacking a bunch of components in one supplement. It’s definitely been a help to some of the guys who’ve written reviews on supplement forums. Given that there’s a money back guarantee, it shouldn’t hurt to try.

Have You Used Epiphany D1? Leave Your Review Below!

is it "EPIPHANYd1" Tablet is comes under doping in Athletics..?.? -Bijili.P.C

A few nootropic supplement ingredients are banned by some sports organizations, including phenylpiracetam.  Epiphany D1 has aniracetam, so I would check with your organization to be sure.- Rob