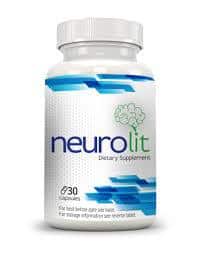 Neuro Lit is a brain boosting nootropic supplement that claims to provide you with the energy and focus you need to be more productive and accomplish your goals throughout the day.

In today’s world, we’re all looking for an edge – something that sets us apart from the pack and gets us noticed, moves us forward.

Look at the explosion of energy drinks and off-label Adderall use.

It’s all the evidence you need to show that we as a society expect more of ourselves and are willing to go to great lengths to pull it off. 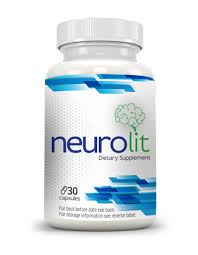 The arguments against using Adderall without a prescription are easy.

The argument against energy drinks is that while sure, you get great energy and even pretty good focus for a while, you end up crashing hard a few hours later, so really you’re just trading off productive time now for wasted time later.

A clean energy and focus supplement like Neuro Lit is a vast improvement over both of the other options.

In fact, Neuro Lit claims that by using their product you’ll experience so much more than just an energy boost.You’ll see:

Of course, these are all benefits typically claimed by nootropic supplements on today’s market, so let’s take a closer look at Neuro Lit to see what, if anything, makes this one so special.

Nailing down what exactly goes into the Neuro Lit formula has proven a little tricky.

There seem to be several different version listed depending on where you look.

Other review websites list Phosphatidylserine and Huperzine A. But in order to clear up any confusion, I went straight to the source – the official Neuro Lit website.

Perhaps they’ve recently changed the formula and that’s the reason for confusion. Truthfully, I’m just not sure.

But clearly, the official product website contains the correct, up to date information.

The Neuro Lit formula is made up of:

On the face of it, Neuro Lit has a decent formula, but there’s one very important key aspect missing.

We don’t know how much of each ingredient is in the formula.

This information is crucial, however, because it’s the difference between working well and not having much of an effect at all.

It’s widely accepted that you want a 1 to 2 Caffeine to L-Theanine ratio.(for example: 100mg C affeine and 200 mg L-Theanine).

It’s believed to be the optimal ratio for creating the best nootropic effect.

Without knowing how much of either ingredient is present, we have no idea whether or not Neuro Lit uses this correct ratio or something close to it.

The same holds true for the other ingredients in the formula.

There is an optimal range, and we don’t know if Neuro Lit falls within it.

The answer to this question is “yes and no”.

The only place you can order Neuro Lit is through their official website.

This is usually also the case with free trial scam supplements. Neuro Lit does offer a free trial, but they also let you make straight up, one time sales.

If you’re unfamiliar with how these “Free Trial” schemes work, allow me to explain itusing Neuro Lit:

You choose the Trial Package plan for just $4.95. In the teeny tiny print at the bottom of the order screen, it informs you that this package includes automatic enrollment in a subscriptionplan, and recommends that you click on and read the Terms and Condition for more details on the matter: 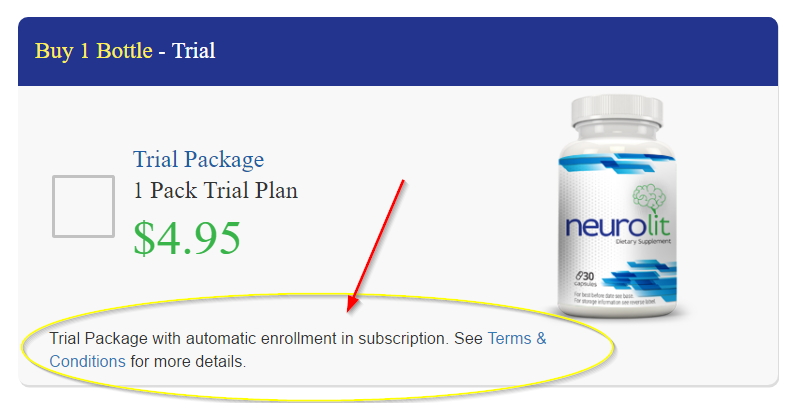 When you do click on the Terms and Conditions link, they first explain how one time purchases work, including the fact that subscription members get first crack at the product when and if there’s limited availability.In other words, they are oh so subtly trying to persuade you that the subscription option is a better choice. 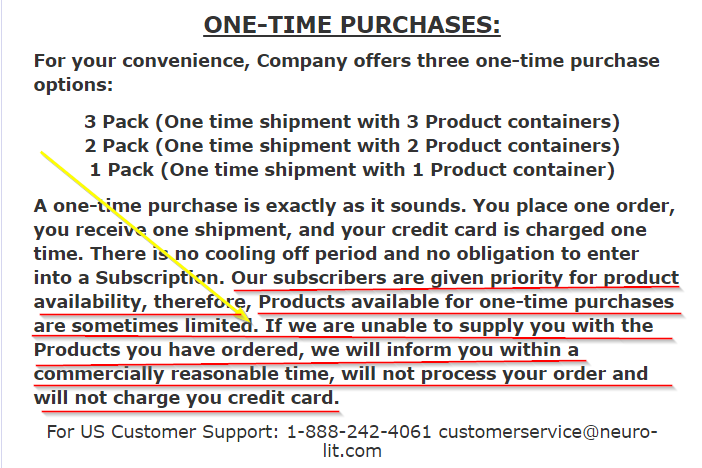 If you scroll down through the terms, you’ll get to the part about the Free Trial: 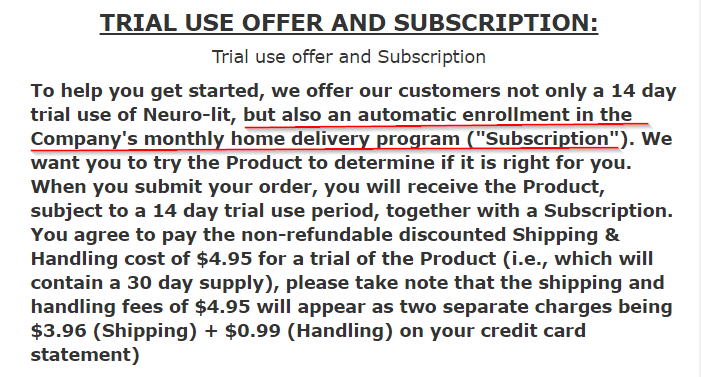 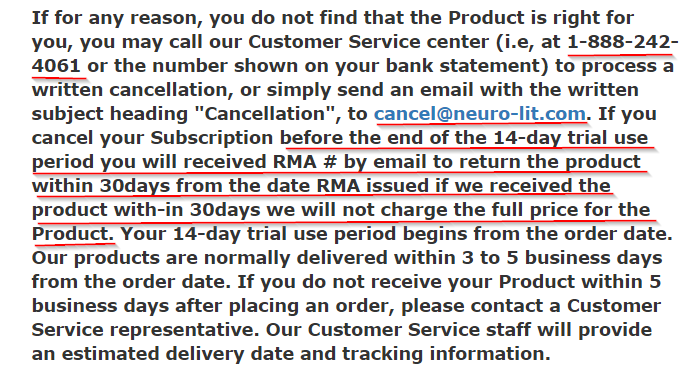 So while you think you’re “trying” Neuro Lit for free while you decide if it’s something you’d like to continue to use, you’re really signing on to pay for it later, unless you return the bottle at your own expense.

I’m quite sure quite they’d have many fewer customers signing on if they knew that.

And not only that, but after being charged $93 for the first bottle – the one you no doubt thought you were getting for free plus the cost of shipping – you’ll get a new bottle each month at that same price, plus shipping!

Here’s the subscription explained on the Terms and Conditions page: 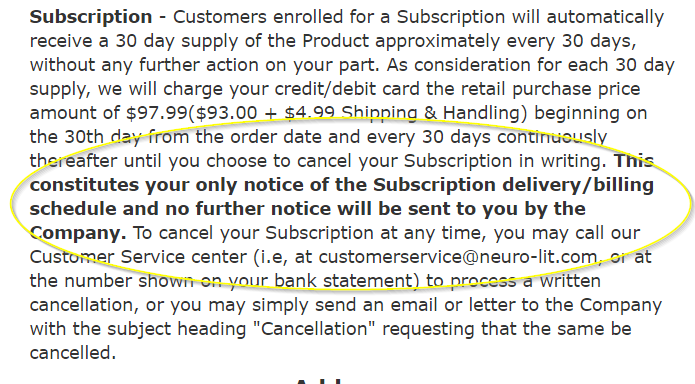 This is why people get so irate over these trials.These companies, including Neuro Lit, actively want you to miss the part where they explain the details.

It should be in bold print, all caps, making sure potential customers know what they’re signing onto.

But it’s not. It’s hidden on separate webpages that you have to read the fine print about and click away from your order being processed in order to read.

The terms have to be available, so they can point back to them when you complain and if trade authorities check into them, but they don’t want you to actually read them before you excitedly place your order for their product.

Now, one thing that does set Neuro Lit apart from so many others is that you are not forced to sign up for the free trial. You can choose the one-time purchase option if you don’t want to get involved with the hassle of the free trial.

And this is what I would recommend if you decide you want to try it, though there is no money back guarantee, so you are still taking a risk, albeit a one-time risk rather than a month after month risk.

I scoured the internet looking for customer feedback about Neuro Lit, but there is simply none to be found.The don’t even currently show customer testimonials on the product website.

Not that I put much faith in the truth of these, but Neuro Lit doesn’t even show them.

This makes it tough to know how well Neuro Lit really works for real people.

Neuro Lit is an all natural brain booster that may provide some cognitive and/or motivational benefits, but the lack of certain key details makes it very difficult to know just how effective it may or may not be. Not knowing the ingredient amounts is a big downfall, and not having access to customer feedback may be an even bigger hit.

I like that you aren’t required to sign up for a subscription plan disguised as a free trial.

This is becoming so common these days it’s always a plus when a product provides other options.

Then again, the lack of a money back guarantee offsets the purchasing pluses with a big negative.

In the end, I’m not convinced that Neuro Lit is worth going through the hassle of trying.

If we’d seen a bunch of positive customer feedback, it might have made sense to risk the money or the hassle, but in the absence of that, you’re just better off trying something with a more proven record.

Have You Used Neuro Lit?

I have noticed changes but wanted to try a second bottle to further test this product just to satisfy my self as to wether or not its was a placebo effect.