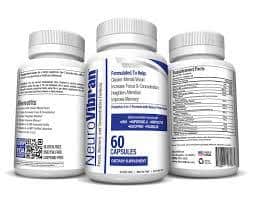 I’ve been researching and testing out a number of nootropic supplements lately.

They’ve been getting pretty popular over the past few years.

It started out as a way to try and get benefits similar to Adderall, using natural ingredients, so you wouldn’t need to get a prescription or buy it on the black market.

Many people that seek out such supplements do so because prescription alternatives are either too hard to get or have the potential to carry nasty side effects as well as become addictive with long term use.

But really they’ve exploded from there.

People use them to feel quicker, sharper, so that they can be more productive and ultimately more successful.

I’ve tried some that I’ve had really good results with, and others that were pure duds.

Nootropics are like any supplement in that it is not only about the ingredients that go into them, but what levels they are concentrated in and whether or not it is a solid formula.

I recently came across NeuroVibran and decided to check it out and try to see which category it belongs in.

NeuroVibran is a cognitive enhancement supplement using natural ingredients to improve the way your brain relates with information it receives.

When it comes to brain power, it’s all about the neurotransmitters.

These are the chemicals within your brain that communicate and transmit information between brain cells.There are several types, and if you can increase certain ones and make them work better, you’ll be rewarded with the benefits of smart drugs.

And with advances in the science of nutrition, more and more substances are being discovered that can have that kind of effect.

Now it’s time to see if NeuroVibran contains and/or promotes any of those substances.

NeuroVibran does not discuss all the ingredients, but they do mention a couple of the more important ones:

Fatty acids (ie omegas) have always been considered brain food, while choline increases the amount of the important neurotransmitter acetylcholine in your brain.

This increase is known to improve communication between brain cells, and it’s also neuroprotective, meaning it preserves the health of brain cells.

A serving of NeuroVibran contains 200 mg.

Bacopa Monnieri has been shown to improve the speed of processing visual information after 12 weeks.

The NeuroVibran website also drops a few breadcrumbs about some of the other ingredients that made the cut.

On the website, NeuroVibran cites several studies of certain substances, ostensibly proving that they can improve cognition.

It stands to reason that these cited substances are what’s in the formula. 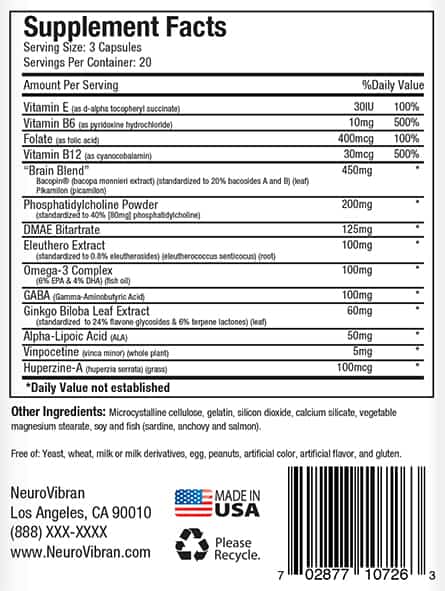 But luckily, we came across a label image containing the entire list, which includes:

The recommended daily dose is 3 capsules, and there are 20 servings in the 60-count bottle.

NeuroVibran claims there are no important side effects of note, and this is probably true for the most part.

That doesn’t mean, of course, that you’re assured there won’t be any mild headaches or nausea. Huperzine A alone has been known to cause nausea, diarrhea, and vomiting, though it’s relatively rare and more likely to occur at higher doses.

In fact, this brings me to a very important point to make about NeuroVibran. The list of ingredients is pretty good.

But just as important as WHAT is in it is HOW MUCH is in it.

The NeuroVibran label does reveal this information, and in a lot of cases, the amounts are low, too low to expect much of an effect.

Tracking down customer feedback on NeuroVibran was not exactly easy, but I did find a few discussions – on Facebook and Reddit.

On their Facebook page, there’s a thread asking whether or not NeuroVibran is a scam.

The comments in response are not very promising: 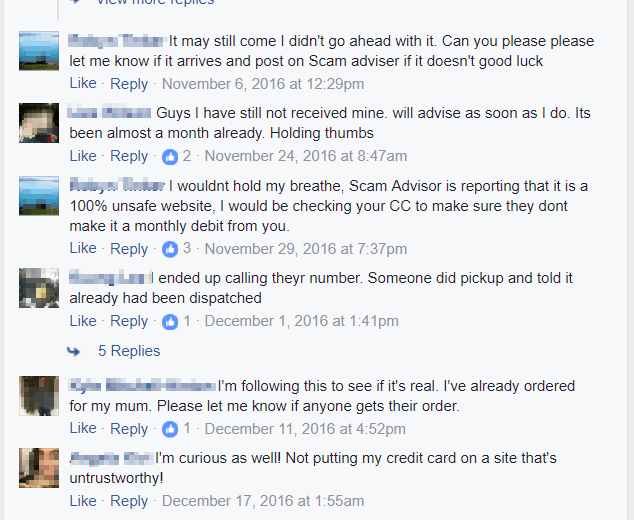 Granted, this is primarily about customer service and product delivery, but still, it doesn’t look good.

I kept scrolling and found one customer that had actually tried NeuroVibran, and still, the news isn’t good:

Some of the commenters looked up the website and found that ScamAdvisor rates it as likely to be a scam: 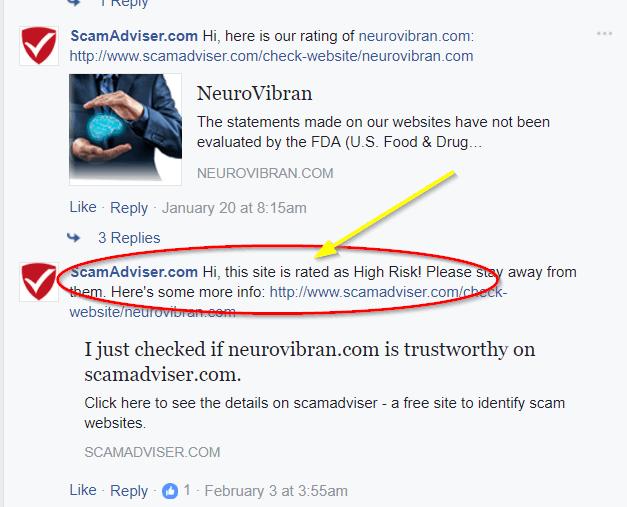 I’ve only found one place where you can buy NeuroVibran, and that is their official website, which as we established above, is rated as high risk.

I can see why actually.

The first time I checked out their order page to figure out how to go about purchasing NeuroVibran, the page didn’t even tell you how much it costs.

You were apparently not allowed to see that until you entered your valid and real credit card number. (Trust me, I tried to enter a fake CC# just to see what the price was, but it didn’t get me very far) So your credit card number had to be collected and verified before you were even allowed to know what they’re going to charge you. No wonder the site is high risk.

I would never knowingly give away my credit card information online (to a high risk website no less!) without knowing what I was going to be charged. 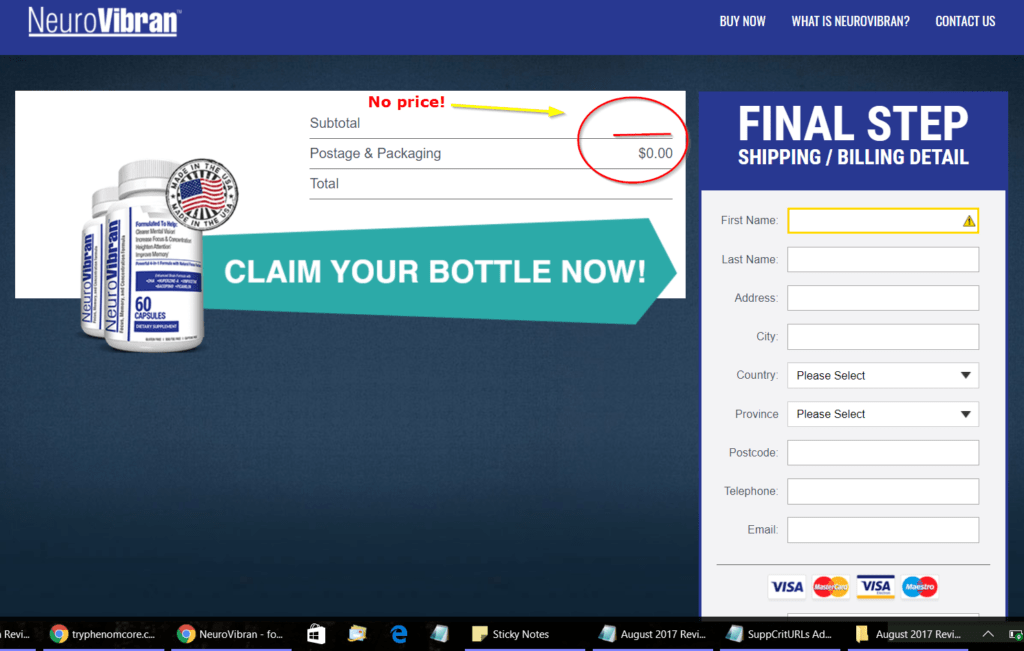 But things had changed the next time I visited the site a few days later.

This time, the order page asked which country you were in, and based on how you answered, they took you to the next phase of ordering, with prices and packages.

Here’s the list of participating countries (Note the United States is not one of them).

They offer certain packages and prices depending on where you live – as long as it’s in one of the listed countries.

Orders are covered by a 30 day money back guarantee. You’d need to call to receive an RMA number, and return the bottle within 30 days.

With so many shady supplements being sold online these days, it pays to be skeptical.

When I first visited the website and they didn’t show a price, it was a big red flag.

I’m pleased that it appears to have been fixed, but who’s to say it won’t look completely different when you visit the website two weeks from now?

Whatever they’re offering at that time, make sure you read the terms and conditions carefully to be sure you know what you’re getting yourself into.

The ingredient amounts in NeuroVibran tend to be low for the most part. It’s a common tactic.

They want bragging rights to say the good stuff is in the formula, but they don’t want to have to cut into their profit margins by paying lots of money for it.

So they put just a little bit into the pill.

This way, they can claim it’s there, but they don’t have to charge a premium for it.

In the end though, it’s the customer that loses, since they don’t get the results they expected.

I’m glad NeuroVibran doesn’t use a free trial scam at this point. It’s a start.

But they’d have to improve their formula to earn my full support.