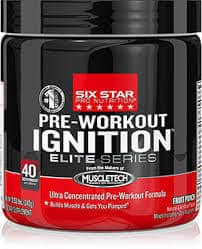 By thatwemean that it promises just about “everything but the kitchen sink.” Here’s the list.

But according to several Six Star Pre Workout Ignitionreviews from customers, I’m not so sure if it delivers.

Let’s take a look at the formula. 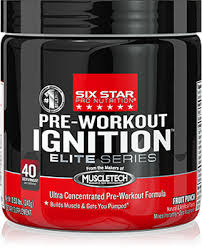 Six Star Pre Workout Ignition Ingredients and How They Work

Basically the entire formula is a proprietary blend they call the Pre-Workout Ignition Matrix.

They don’t disclose amounts, but the components of the Six Star Pre Workout Ignition formula are:

The instructions ask that you test the waters carefully at first by taking just a 1-scoop serving to assess your tolerance.

After that, you can use up to 3 scoops mixed with 12 ounces of water.

You can purchase Six Star Pre Workout Ignition online and in stores like CVS and Walgreens.

We’ve seen the 40 scoop tub selling for as little as $16 at Bodybuilding.com and as much as $22 at CVS.Either way, it’s pretty cheap.

There’s an old saying I’m sure you’re familiar with. “You get what you pay for.” Nine times out of ten it’s true, and this seems to be the case with Six Star Pre Workout Ignition.