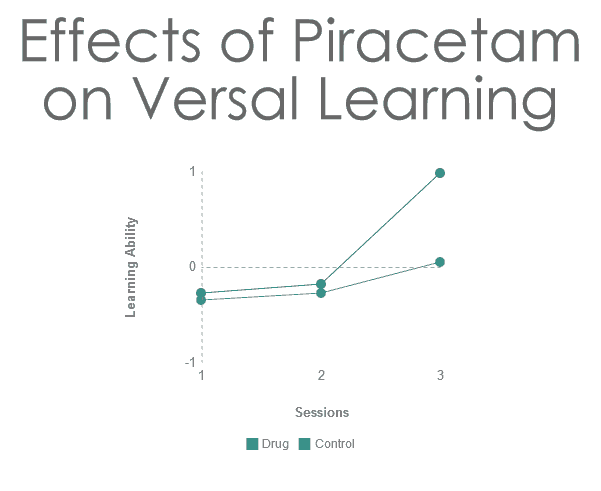 And in this chapter were going to talk about the meat and potatoes of the subject… what their benefits are.

We’ve explained some of the advantages of taking nootropics, particularly in regards to focus, learning and memory.

But your inner skeptic might be wondering… Where’s the proof?

Sometimes, to be persuaded, you need quantified results – which we will deliver.

Impact on Memory, Attention and Learning

In 1976, two researchers at University College in Cardiff, Wales performed a small study on the effects of piracetam in normal subjects.

The researchers found clear evidence for improvement in verbal learning due to piracetam administration.

The majority of students had intellectually demanding jobs, and had claimed a slight decrease in their ability to recall or retain data. 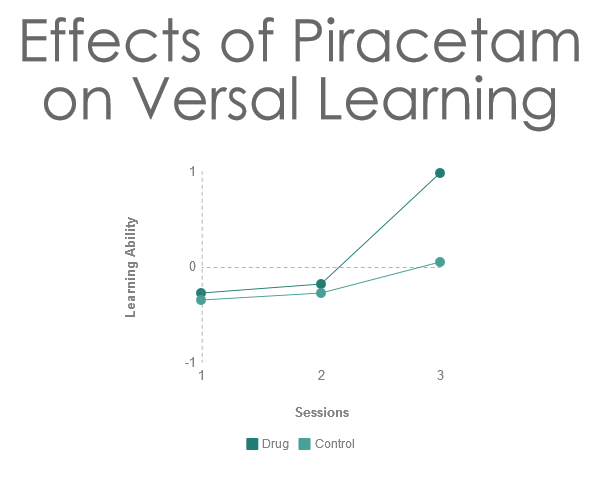 After receiving 4.8 grams of piracetam per day, the students were given placebo for 4 weeks.

Results of the paper and pencil tests and the computerized tests to measure perceptual motor reactions indicated that piracetam has greater effects on performance than placebo.

The results of this study were summarized in the influential and provocatively titled paper “Increase in the Power of Human Memory in Normal Man through the Use of Drugs.”

On a toxicological level, nootropics are among the safest substances ever developed.

Toxicity studies on nootropics have been performed on humans and a wide range of animals, including mice, goldfish, rats, rabbits, cats, dogs, guinea pigs and monkeys.

In acute toxicity trials – where rats received 8g of intravenous doses of piracetam and rats, dogs and mice got the same amount orally – there was no toxicity. Note that this is the equivalent to 560-700g for a human weighing 154 pounds.

No toxicity and no teratogenic (which causes birth defects) were found.

Aphasia – a condition that affects the ability to communicate – usually happens after a stroke or head injury.

The condition negatively impacts speech and the ability to understand verbal and written communication.

In some cases, aphasia can occur gradually due to a degenerative disease or slow-growing brain tumor.

Language and speech therapy are the primary treatments for aphasia; however, piracetam has been found to have a beneficial effect on the recovery of aphasic stroke.

In one study, 24 aphasic patients were given 4.8g daily doses of piracetam, while 26 patients received placebo.

Piracetam had a significantly favorable effect on the written language subtest.

On the communicative ability scale, the piracetam group’s scores in spontaneous speech improved.

Also, no adverse effects were reported in the piracetam group.

While this was only one trial and can hardly be considered definitive, another study on these same subjects confirmed that piracetam can boost written language skills plus reduce the severity of the subjects’ aphasia (Poeck, 1998).

Dementia is the loss of intellectual abilities, resulting in a serious inability to perform everyday tasks.

It’s not a disease in itself, but rather the term used to describe an extensive range of symptoms linked to a decline in memory and other thinking skills.

Alzheimer’s disease is the most prevalent form of dementia.

Elderly individuals with Alzheimer’s frequently display a lower “hydrocarbon core” (which is associated with the cell membranes) fluidity than elderly people who don’t have the disease.

In a study involving in vitro administration of piracetam, the dementia patients’ hydrocarbon core fluidity went up to the same level as the non-demented elderly.

On top of that, piracetam enhanced the fluidity of those who did not have the disease.

For both groups, piracetam was shown to decrease age-related alterations of membrane fluidity (Eckert et al., 1999).

Like its sister compound piracetam, aniracetam has proven to be effective in selective areas.

We will, however, spare you the dreary details by providing just one example. And we will keep things interesting by engaging in a bit of sibling rivalry….

In one of the studies, aniracetam was found to be superior to piracetam, which has been monopolizing the nootropics research spotlight for decades.

It’s time for aniracetam to shine.

The purpose of the study, which was conducted throughout Western Europe, was to determine whether aniracetam could benefit people ages 68 to 80 who had mild to moderate cognitive impairment and met the criteria for likely having dementia stemming from Alzheimer’s.

The aniracetam group experienced few side effects, and the ones that were present were so mild and transitory that no subject had to stop treatment as a result. On top of that, aniracetam proved to be even more effective than piracetam in this trial, and has shown to have anxiolytic effects in animal studies.

A traumatic brain injury happens when an external force causes the brain to dysfunction, such as a violent blow to the head or body.

It can also occur when an object, such as a bullet, pierces the skull.

Phenylpiracetam is even prescribed to astronauts in Russia who use it to sharpen their physical and mental abilities while in space (Malykh & Sadaie, 2010).

The compound has enhanced the cognition scores of people with cognitive impairment or depression following encephalopathy, and brain injuries such as acute lesions, gliomas surgery and brain traumas.

In one study, phenylpiracetam performed even better than piracetam because it worked substantially faster to mend cognitive injury, along with ridding the patients of headaches. Piracetam, defeated again!

And not for the last time either…

Pramiracetam has been reported to improve cognitive deficits resulting from brain trauma.

Why We Need Choline, Vitamins and Supplements

Choline deficiency can increase the risk of DNA damage.

Choline and its derivatives are not vitamins per se, but in 1998 they were recognized by the Institute of Medicine as being necessary to maintaining human health.

Basically, choline is the precursor to the neurotransmitter acetylcholine which is involved in muscle control and memory.

To reinforce the importance of choline, the Linus Pauling Institute issued a warning about choline deficiency, which can cause DNA damage and fatty liver.

Estrogen levels might have been the issue with the premenopausal women; however, adding choline to the subjects’ diets fixed the problem rather quickly.

Huperzia serrata is a plant that contains the alkaloid huperzine A, another treatment that, for whatever reason, all too often gets swept under the rug and isn’t given the attention it deserves.

WebMd has a great section on huperzine A’s function in the treatment of age-related memory problems and Alzheimer’s disease.

As previously discussed, huperzine A belongs to a group of cholinergics known as acetylcholinesterase inhibitors.

By blocking the activity of the enzyme responsible for breaking down acetylcholine, huperzine A increases the amount of acetylcholine present in the brain and lengthens the duration.

Taking B-complex vitamin supplements is especially important because many of us don’t get enough of them in our diets.

Whole processed foods have the highest amounts of B vitamins, but it’s often difficult to find them in local grocery stores.

For instance, severe, persistent thiamine (B1) deficiency can cause limb pain, irregular heartbeat, edema and even death.

Thiamine deficiency can also cause all sorts of neurological dysfunctions that affect memory, coordination and vision.

Smokers, alcoholics, coffee drinkers and people who eat large amounts of certain kinds of fish are all at risk for developing thiamine deficiency.

You will find that each B vitamin has its own benefits.

Folic acid (B9) deficiency in pregnant women can cause birth defects and impaired mental functioning in other people.

However, studies indicate that folic acid supplementation may reduce symptoms of depression.

It can also reduce women’s chances of developing macular degeneration, the leading cause of vision loss.

Biotin (B7) plays a crucial role in metabolism, and is necessary for glucose and amino acids production.

Biotin deficiency can cause vomiting, anorexia, dermatitis and neurological symptoms, including lethargy, hallucinations and peripheral neuropathy.

Liver, egg yolks, kidney and nuts are all good sources of biotin.

If you cannot access these foods, try cereal or biotin supplements (Schnepp, 2002).

Bacopa monierri (brahmi) is a plant native to India that has been traditionally used in Ayurvedic medicine for a host of problems, especially those dealing with anxiety and intellect.

In a study involving humans, brahmi did not have a significant effect on subjects’ short term memory.

But it improved their scores on recalling unrelated word pairs (Roodenrys et al., 2002).

We definitely cannot end this chapter without extending a shout-out to sulbutiamine, a nootropic related to thiamine (B1), but has a greater ability to cross the blood-brain barrier than its parent compound.

Sulbutiamine has shown promise in the treatment of asthenia and memory impairment.

Stay tuned for a behind-the-scenes look at how nootropics work.

2 comments on “Benefits of Nootropics”