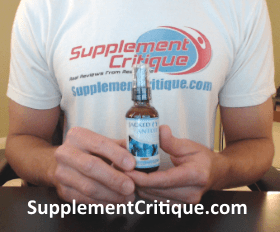 Home » Hgh Supplements » Jacked Antler Review – Should You Use It?

Jump to a topic

If you haven’t at least heard a little buzz about Deer Antler Velvet spray and how it may or may not increase your muscle gains, you’re no doubt living under a rock.

But with all the hyped up useless products out there, and all the snake oil salesmen trying to sell them to you, you might want to stay put under your rock.

But if you have heard of deer antler velvet and/or you’re curious about it, read on.

Special Note:The makers of Jacked Antler were kind enough to send over a couple bottles of their product for re-testing.

I plan on trying it out in about a week, and will be updating this review in the near future with my re-assessment of its effectiveness.

Be sure to check back soon for updates!

1. What Is Jacked Antler? 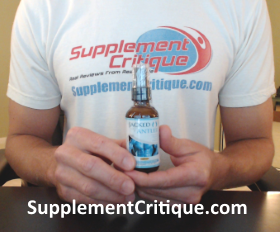 Jacked Antler is a spray containing, among other things, deer antler velvet.

Supposedly, there’s a certain chemical found in the fuzzy outer covering of a male deer’s antlers when they’re growing that when taken by humans can:

If you believe what you read on the Jacked Antler website, professional athletes and their coaches swear by the stuff, as do both male and female celebrities.

They claim to send care packages containing Jacked Antler to famous athletes and other celebrities, hoping they’ll receive a ringing endorsement back.

I don’t know if I’d advertise that program.

If they’re sending this out for free, and nobody’s coming forward to endorse it, that’s not a good sign that Jacked Antler is anything to write home about.

3. How Does Jacked Antler Work?

IGF-1 (Insulin Growth Factor-1) is the key component to the success of Jacked Antler.

IGF is found naturally in the human body.

It encourages growth and repair while it controls several cell processes.

The IGF-1 in Jacked Antler is a chain of amino acids that stimulates muscle growth while protecting your organs and regenerating tissue.

Why Not Just Take HGH?

HGH, or human growth hormone, is becoming all the rage in anti-aging for the rich and famous.

It’s naturally secreted by the pituitary gland, but much like Testosterone, your body releases less and less of it as you age.

It’s been found that increasing the amount of HGH in your body can smooth wrinkled skin, provide energy, help you get a better night’s sleep, quicken the pace of recovery after workouts and injuries, and even improve your mood.

If you have enough money as well as access to the right doctors, you can get daily HGH injections to achieve all the above mentioned benefits.

Last I checked, it can cost upwards of $1000 a month, and it’s technically not approved for this kind of use.Most doctors won’t prescribe HGH injections for adults trying to stay young.

So ordinary, everyday people turn to a supplement like Jacked Antler to reach that point of increased HGH the safer, less expensive way.

When researching the Jacked Antler formula, we came across a discrepancy, which leaves us unsure of what’s actually included.

The official website displays an image of the “Supplement Facts” presumably taken from the bottle label.

But the website separately offers a completely different list as well, leaving us confused about what’s really in the formula.

According to the Supplement Facts, Jacked Antlercontains:

That’s what’s listed on what appears to be the Jacked Antler label.

But as part of the promotional part of the website, several other ingredients are listed alongside their purported benefits.

Luckily, I have a bottle here that I had sent to me. Here’s a photo of the label: 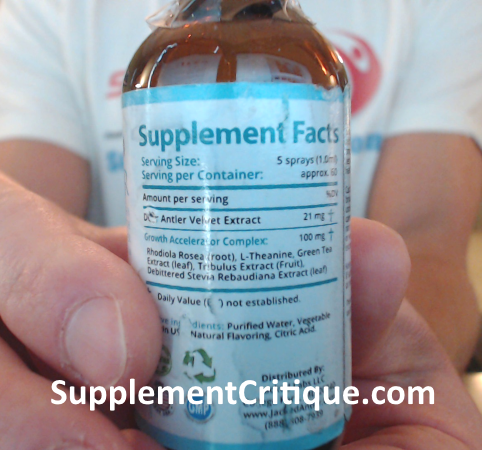 5. How To Use Jacked Antler

The recommended dose is 5 sprays taken both before and after your workout.

It’s expected that you see the best results after about 4 weeks, but you’ll start seeing some effect in just 3 or 4 days.

At this point, the only way to purchase Jacked Antler is through their official website.

They do, however, offer a few different package options.

The third option is the free trial offer.The way it works is that you order a full size bottle and pay only $4.95 in shipping charges.From that moment, you have 20 days to contact Jacked Antler at 1-888-7939 and cancel your subscription.

If you don’t cancel, they’ll bill you $82.45 for your trial bottle, and they’ll automatically enroll you in their VIP Program, meaning that you’ll be sent and billed for a new bottle each month.

This is commonly known as the “Free Trial Scam.” I can’t even begin to tell you how many readers I hear from every day who’ve fallen prey to this kind of scam.Usually, the terms are hidden on a separate web page, or written in superfine print, basically designed to be missed.

Jacked Antler is actually a little better than some others I’ve seen. At least they offer you options.

If you don’t want to get caught up in the free trial madness, you can simply order a one month “Starter Package” bottle, and you won’t be on the hook for anything else.

People are excited about deer antler velvet in general because it’s an idea that does show some promise.

Unfortunately, at this point, it’s not really been shown to be effective, and Jacked Antler doesn’t instill confidence as a product.

It seems as though their marketing was yet another case of all bark and no bite, yet I must say that everyone is different and it could potentially be useful for you personally.

Some of the information about Jacked Antler is conflicting and that doesn’t do a lot in the way of making me feel okay about recommending it to others, and because of that, I can not.

Trying Jacked Antler would almost certainly be nothing more than a waste of money.

Have You Used Jacked Antler?

I was thinking about buying some of this Jacked Antler Spray and I was just wondering, do you just spray it all over your body? -Korbyn

You spray it into your mouth, 5 sprays before and 5 sprays after your workout.- Rob

If I take Jacked Antler and stop will my body no longer create testosterone? -Tony

Not at all. It's all natural ingredients, none of which shut down your natural hormonal processes.- Rob

Will this show up on a drug test? Since Jacked Antler seems to increase HGH I wasn't sure if it is legal. I'm in the military and just don't want to take any chances. -Jesse

It shouldn't, but it does contain deer antler velvet so you should let them know at the testing site.- Rob

Can you take arginine with Jacked Antler? -Ty

You can, but if you let me know what your goals are, I"ll make a great recommendation for you.- Rob

How to cancel my membership and order of Jacked Antler? -Bobby

15 comments on “Jacked Antler Review – Should You Use It?”