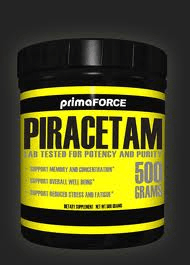 In our search for a safe and effective alternative to ADD/ADHD prescription medications, Piracetam is something that we come across quite a lot. It’s kind of the grand patriarch of the nootropics, or smart drugs. First synthesized in 1964 in Belgium, it was apparent immediately that Piracetam had a real effect on the brain functioning and it appeared to be safe as well. Dr. Corneliu E.

Giurgea, the scientist who devoloped Piracetam, was in fact the one who coined the term nootropic to describe supbstances that improve cognitive ability, making Piracetam the first nootropic.

The mechanism of action is not completely understood, but what is known is that it affects neurons, blood vessels, and brain function without acting as a stimulant or sedative. It appears to affect the pathways of communication between neurons, increasing their excitability. It also increases blood flow which leads to more oxygen being made available to the brain. Additionally, it affects memory and learning by having a positive effect on cell membrane permeability.

How Piracetam is Used

Piracetam is sometimes prescribed for conditions such as a particular form of muscle twitching, but it is much more commonly used for “off-label” purposes, meaning for conditions not scientifically determined to be directly treated by the product, namely enhanced brain functioning.

As a nootropic, Piracetamis thought to have a positive effect on brain functioning. There is some scientific and anecdotal evidence that this is indeed the case. One thing to note, however, is that most of the scientific testing of Piracetam was performed not on healthy subjects, but on people with conditions such as stroke and alzheimers. So it is difficult to determine what real effect Piracetam has on healthy people looking to improve their mental clarity and focus.

Studies of Piracetam have revealed very few side effects, and those are mild and temporary. Those that have been reported include headache, agitation, and nervousness. Lucid dreaming, where the dreamer is aware that they are dreaming, is another side effect, and it’s led to the use of Piracetam specifically for this purpose by some. Generally speaking, Piracetam has been found to be quite safe, with no significant side effects or downsides.

Piracetam is sold under a number of different names and brands. Prices and availability vary, but what we found most frequently was 60-count bottles of 800 mg capsules selling for about $15 to $20 online.

If you’re searching for a supplement to help you improve your cognitive functioning, you can go with a complete, ready made solution that includes a bunch of different ingredients, some of which you know and some of which you don’t. Another way to go is to educate yourself about what specific compounds might be able to help. Piracetam seems like a promising and economical way to go. Of course, we’d recommend consulting your doctor before going forward with plans to supplement with Piracetam or most anything else.

Have You Used Piracetam? Leave Your Review Below!

How would you compare Piracetam to Optimind?  Which one has better effects? -javo

For me, Piracetam helped more with confidence, social interaction, and mood, while Optimind helped more with focus and concentration / getting things done.
- Rob
Was this question helpful to you?
Thank you for your feedback.
ASK A NEW QUESTION