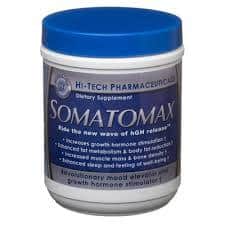 Somatomax is a controversial supplement that we’ve been hearing a lot about lately. It’s made by Hi-Tech Pharmaceuticals, which has a checkered past of its own which involved several legal battles with the FDA and FTC over using banned and prescription only substances in their products.

Somatomax is something of a hybrid supplement.

It’s an HGH releaser which means that it encourages your body’s production of of HGH, or Human Growth Hormone. HGH is present in high amounts when we’re young, but its production decreases with age. If we can get our bodies to produce more, we’ll burn more fat, feel better, sleep better, and have more energy. So the question is, can Somatomax do this for us.

If you look at Somatomax reviews, you’ll see that it’s used as a sleep aid more than anything else. Most people don’t dispute that it makes them sleep longer and more deeply than without it. Yet there is disagreement about how it makes them feel when they wake up. Some guys say they feel refreshed and ready to go.

Others wake up feeling groggy. 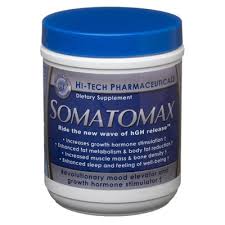 Part of the controversy stems from the formula. The primary ingredient is Phenibut, which is an amino acid that resembles GABA, an extremely important neurotransmitter for relieving anxiety. The advantage over GABA (which is also in the Somatomaxformula) is that it can cross the blood brain barrier whereas GABA cannot.

It does this by adding a phenyl ring around the gaba, allowing it to cross the blood brain barrier. I’ve taken many supplements containing phenibut in the past, and can attest to it’s potency and results.

However, there are many dangers to taking Phenibut for a prolonged period of time. Because your body tends to develope a tolerance to it quite rapidly, you need more and more of the stuff to get the same intended results.

After prolonged usage, when you decided to stop taking Somatomax, the body starts to incur a withdrawal period, which can be quite unpleasant. Some of the most notable withdrawal effects when coming off Phenibut include increased anxiety, irritability, panic attacks, mood swings, and insomnia.

You can avoid this by taking this sparingly, about once or twice a week with at least a 3 day break in between.

Additionally, there are a number of amino acids, including L-Arginine, L-Tyrosine, and L-Phenylalanine that cause Somatomax to increase the amount of HGH released by 1600%. Again, this is what makes Somatomax a supplement for improving athletic (and sexual) performance.

How do I take it?

The instructions for taking Somatomax are to mix one heaping scoop with a beverage and drink it before going to bed. There are 20 doses in a tub. There is no clear discussion by the manufacturer about how often you’re supposed to use it. Most of the recommendations we’ve seen from retailers and other users are to use it only occasionally so as not to create a tolerance or the potential for withdrawal symptoms.

One thing that I wanted to note was that products that contain Phenibut, like Somatomax, takes a VERY long time to reach its peak. So, for example, if you plan on going to bed at around 11 pm, you should consider dosing around 6 pm that night.

It can literally take as long as 1 – 2 hours before you feel the initial effects, and upwards of 5 hours before it reaches its peak. Everyone responds to Phenibut differently, so the only way you’ll know for sure is by experimenting yourself.

I would also caution against driving while taking Somatomax, as it does have the ability to make you sleepy / drowsy. Alcohol intensifies this effect, so I would recommend you abstain from alcoholic beverages while using it.

You can purchase Somatomaxthrough several online supplement retailers. A tub containing 20 servings sells for anywhere from $30 to $40. You used to be able to buy it in retail stores like GNC and Vitamin Shoppe, but they have since discontinued selling it.

There are definitely some benefits you can get from taking Somatomax. It can improve your sleep and your mood, but there isn’t really a whole lot of evidence that it can improve your physical performance. In fact, there are lots of people who use it recreationally. Given all the criticisms about it making you nauseous and it being difficult to come off of, we’d just recommend that you skip Somatomax.

If you are looking for a supplement that is going to be a healthier alternative to its prescription counterparts, then I would say that you are not going to get that with Somatomax.

It has enough potential for bad side effects to warrant taking a look into some of the other options out there.

Have You Used Somatomax? Leave Your Review Below!

I sincerely want to write this in hopes that this will stop many from the dangers of this. I heard of Somatomax from a friend while on a job.  Everyone lifts heavy and everyone raved about this stuff. When I took it, the effects did just as described, Happier, Longer sleep and higher sex drive.  Now the I took this at 1/2-3/4 scoop every night for 4 months. I left the job, didnt think much of it, 2 days later I was vomiting everything I touched, no diarrhea, but HARD HARD mood swings.  Cold Sweats. Racing thoughts.  Horrible thoughts. Shaking uncontrollably.  I went to ER in foreign country and they gave me very low dosage of xanax to calm me down. There is really nothing a doctor can do other than that.  I hate prescription meds and I never messed with harder supplements when lifting. Skipping forward some time.  I am now going on 5 days each with its own time period of nightmarish cold sweats and panic attacks, I was able to eat as normal on day 4 but still am suffering from the rest. Main thing is when you come off it everything reverses.  You feel Terrible. Don't want to do anything.  No as in 100% NO SEX DRIVE. And the longest I have slept in a 1 straight period was 5 hrs on day 5. Hoping the effects return to normal within a week.  But I swear I will never touch that stuff again.

Rob Miller: Yeah Phenibut (the active ingredient in Somatomax) withdrawal can be a bitch...I know you said you don't plan on taking it anymore, but as a warning to anyone else taking this and deciding to come off of it I have one FIRM suggestion....
TAPER OFF OF IT...Take a little bit less each day and spread it out over a period of time.

It will help your bodies withdrawal response to lessen and you'll be WAY more comfortable.

It works! I have suffered from chronic insomnia for more than 25 years and tried everything from prescription to natural and nothing really worked.  Enter Somatomax. Now I sleep well every night.  My only criticism is that some batches have differing dosage requirements. But my biggest fear is that it might become unavailable for some reason.

I sleep like a baby after taking iy, but I got it for the increased HGH benefits to help heal an old ligiment injury in my neck. My neck feels somewhat better after about a month, so I am pleased with that as well.  I have been cycling on and off about every 8 days because of some of the warnings. Ido 7 or 8 on and 4 or 5 off and that seems to be working without any side effects.

Used to take it 1-2 times a week to help me fall asleep and recover from a good workout while in the navy. Sleeping on an aircraft carrier was rough and this eased it up.  Never had withdrawals or addiction to it. Did feel somewhat drunk when I would wake up but not a big deal.

The side effects for me when coming off of Somatomax have been horrible.
I had previously (the worst of it was decades ago) suffered from Generalized Anxiety Disorder and had gotten past that through talk therapy (no drugs.) Absolutely agree with the comments about dosage.

First time I took a full scoop. Within 30 minutes my face and arms felt like they had ants crawling on them.  Next day was awful – dizzy, disoriented, sleepy. Cut back to 3/4 and was better, but still not good – had heart palpitations about an hour after taking and was still a bit woozy the next day.  Eventually cut back to about 1/2 scoop for several weeks then started reading about the side effects (some of which I already started to experience) so I stopped cold turkey. Don’t do that.  Lots of anxiety and emotional ups and downs.

So I’ve started trying to taper off of it. Still having significant mood swings, overwhelming guilt feelings and anxiety and then they’ll just go away.  I’m going to contact a psychologist and psychologist tomorrow to try to get some help. I just wanted to add another cautionary tale to the others listed here in the hopes that it will prevent someone from having this same experience.

I’m very happy for those for whom this product works, but I have a lot of sympathy for the folks with the withdrawal symptoms.  Good luck to those of you who have withdrawal symptoms – I suggest getting some sort of support to help you through them.