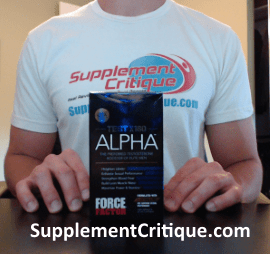 If your in the market for an all natural testosterone booster, your head may be spinning right about now. There are so many supplements out there that promise to produce great results, but it can be hard to cut through all of the BS sometimes. We’ve personally tested hundreds of them, and while some of them work decent, the vast majority are junk.

Well, we recently got a chance to test out a product called Test X180 Alpha, which is made by the same company that makes the brand Force Factor. How does this supplement compare to the many we’ve reviewed in the past? Read on to find out. 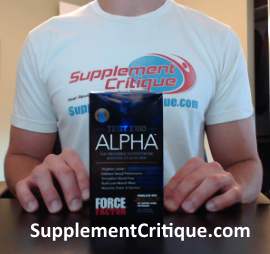 Made by the same guys that brought you the original Test X180 and Test yyX180 Ignite, this supplement is the latest edition to their product line. It promises heightened libido, strengthened blood flow, and enhanced sexual performance, amongst other benefits. It does all of this through a unique and proprietary formula of ingredients, which including: Thiamine, Riboflavin, Vitamins B6 and B12, Zinc, Selenium, Copper, and Manganese.

You actually get many of these nutrients from several potent testosterone boosting foods, but unless you have a perfect diet you’re probably missing out on getting most of them.

Most of these ingredients probably sound like greek to you, so I will just point out a few of the “good” ones that seem to give the best results.

Testofen – Testofen is basically just Fenugreek seed extract, but this version is standardized for 50% Fenuside. So what does that mean? Well, in both animal and human clinical studies conducted on Testofen, both concluded that with a healthy and stable dosage of their extract, libido was increased significantly. In addition, the study concluded that there was a significant increase in free testosterone levels, as well as enhanced immune system and decreased body fat composition.

It’s a little boring to read through, but I have attached the results of this study to my site, read through it here. Your probably wondering “Can I just take Testofen or Fenugreek seed extract by itself and get the same results. In my personal opinion, no. I think it’s the combination of other ingredients that really makes this formula stand out, especially L-Citrulline.

Normally I send products out like this for testing to my research staff, but this one I had to try out for myself. It’s not that I suffer from low libido issues or anything, but rather I used it for its supposed Lean Muscle producing effects. In the first few days I was taking it, I have to be honest, I didn’t feel any difference. After a week or so though, this all began to change.

I started to feel more energetic, but not like the energy you get from downing a pre workout supplement that’s loaded with stimulants. It was more of a smooth energy increase, the kind that DOESN’T leave you feeling ridiculously tired at the end of the day. This energy didn’t interfere with my sleep schedule or anything, even when I took it later in the day. On the contrary, I would actually say that my sleep quality improved pretty significantly. I was sleeping more soundly, and not waking up 1 or 2 times a night to take a piss.

I also felt like I was recovering quicker after my workouts as well. I do ALOT of weight vest training and high intensity interval training, and normally my legs are shot for a couple of days. After using Test X180 Alpha for a couple of weeks, I noticed I was only sore for a day, at the most. Some days I didn’t even feel like I worked out the day before, which gave me the ability to increase my workout regiment by at least 20%.

The only downside I would say for me was that the effects started to wear off pretty quickly after 3 weeks or so, so I would definitely recommend you cycle this on a 3 week on, 1 week off basis. I also had one of my product testers try it out as well, check out his video review of Test X180 Alpha below:

I’ve had a few guys ask me about the differences between these 2, so I figured I would add a quick blurb about it. They both contain similar ingredients, including Fenugreek. However, Testofuel does NOT contain the patented Testofen version. 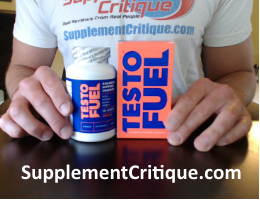 The price differences between the 2 are pretty staggering. One bottle of Testofuel will run you about $65, while 1 bottle of Test X180 Alpha will cost you close to $100 at GNC.

Additionally, while Testofuel gives discounts for larger orders, TestX 180 Alpha does NOT.

If you buy 3 boxes of Testofuel you’ll get an additional box free of charge for a total cost of $195.

Contrast this with a 4 bottle order of Test X 180 Alpha from GNC, which will cost you close to $400, and you can see how the prices diverge significantly.

I’ve personally tested both of these supplements, and I can say with absolute certainty that Testofuel indeed works better.

You can read more in my full review here. 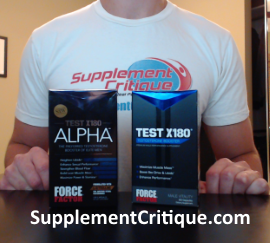 There are some very noticeable differences between the original and this new formula. For one, there is a healthy addition of ingredients in Test X180 Alpha that are not found in the original, including L-Citrulline, Catuaba bark extract, Maca root, and many others. In my opinion, the new formula is much stronger than the older one, and I seemed to get an overall better reaction from the Alpha version.

After digging a little deeper, it looks like I am not alone. The reviews and testimonials I found online of Test X180 Alpha were MUCH more favorable than that of the original, so it seems like they’ve hit the big one with this formula. The price difference between these 2 is huge, with a bottle of the Alpha version going for $140 for 120 capsules, while the original was $70 for 60 capsules.

You’re probably thinking that “well, your getting double the amount of capsules, so it would only make sense that it’s going to be double the price”, right? Well, the difference is that with the original you only needed to take 2 capsules a day, but with Test X180 Alpha you’re gonna need to take 4 per day. This more or less is the equivalent of a one month supply for each, making the price difference substantial. 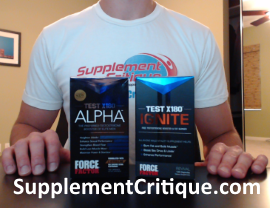 Another version they came out with is Test X180 Ignite, which also has some keen differences between each other. While both contain the trademarked ingredient Testofen Fenugreek seed extract, the Ignite version seems to focus more on the fat burning essence of the product. It contains stimulants such as green leaf extract, green coffee extract, and caffeine, which all should help aid in men looking to lose a substantial amount of weight.

As far as which one I would recommend, it depends on the situation. If you’re looking for something to not only help with libido, but also with getting rid of the spare tire, then I would recommend Test X180 Ignite. However, if you’re looking for something that can help boost libido, but also to help improve lean muscle and stamina, then I would go with Test X180 Alpha.

Also, it would be wise to refrain from consuming alcohol while taking ANY of these products.

As I wrote about in this article, chronic consumption of alcohol has been directly shown to cause a decrease in your overall free and total testosterone levels.

Drinking in moderation is totally fine, however.

Where To Buy Test X180 Alpha

Like its predecessors, you can find Test X180 Alpha conveniently available both online, and in GNC. The price comes in at a whopping $139.99 on their official site, but can be purchased a bit cheaper if you are a GNC member.

All in all, I think the guys over at Force Factor have gotten it right with Test X180 Alpha. It’s unique blend of ingredients WILL give you a substantial increase in libido and performance, and from all accounts it looks to be a potent muscle building agent. The only real downside is the price, but when it comes to supplements, you often get what you pay for. I would fully recommend Test X180 Alpha to anyone looking to not only get a HUGE benefit in the gym, but also in the bedroom as well.

Have You Used Test X180 Alpha? Leave Your Review Below!

How long does it take for it to work -Henry cleveland

I started to feel more energy in about a week. Then the other effects came on a little more gradually, with full results in about 4 weeks.- Rob

hi there Iam 40+. how do i use testx180 for my sexual life & how many capsul and what time have to take? please let me know. thanks -nurul

Take one capsule with breakfast and one with lunch.  You should also take about a week off every month or 2.- Rob

Can u take both the Force Factor AlPha and the 180 Ignite together??? -Marvin Jones

Generally, you'd take one or the other. Ignite will give you more of a boost, if that's something you're looking for.- Rob

How can I get it here in Denmark? Please respond ! -Toke

It's sold online and in stores, but I don't know who sells it specifically in Denmark. I believe it's sold by Amazon.com. You may want to check there.- Rob