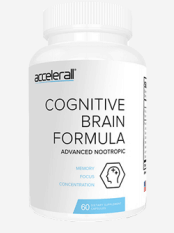 Imagine popping one ‘smart pill’ and suddenly becoming the most productive person at your job.

Then a month later you get another promotion.

Your co-workers start calling you ‘Superman’, and before you know it you’re running the joint.

Well, that’s essentially what the product Accelleral promises to do for you.

This ‘Breakthrough Brain Enhancing’ pill is being sold as a fast-acting ‘Adderall replacement’.

Check out this advertisement I recently came across. 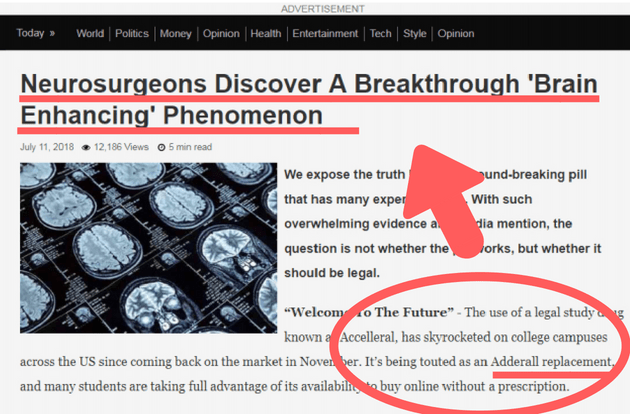 Or is it just another bogus product being marketed in the scammiest way possible?

I’m gonna share everything you need to know about Accelleral, and blast it for what it is.

So hang tight, we’re gonna have a little fun.

Supposedly it’s a memory enhancer brain-booster that will change your life on a dime if you’ll only give it a try.

According to a breaking ‘news story’ about Accelleral…

Just the other day I was served an advertisement that looked a helluva lot like breaking news from a reputable site.

So I did what most people would do, I clicked in to read the news.

And here’s what I saw… 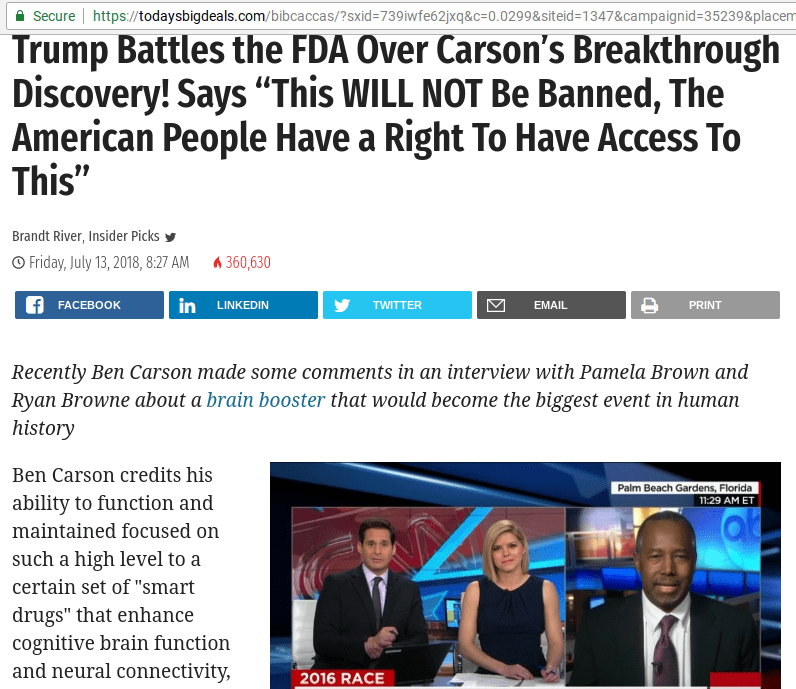 But I’ve been doing this long enough to know better.

This is just the tip of the ‘scam-berg’, if you will.

This is becoming a HUGE problem.

So many good people are being scammed out of their hard-earned money by fake products that don’t work.

AARP is one of many reputable sources now warning their readers of this possibility. (Ironically enough, I’ve been served ads by AARP for similar product scams… but that’s neither here nor there).

But what should you be looking out for?

And how do you know Accelleral is one of these scams?

Well, let’s take a closer look at the Accelleral advertisement and have a look at some common themes you’ll find in fake articles, or ‘Farticles’. 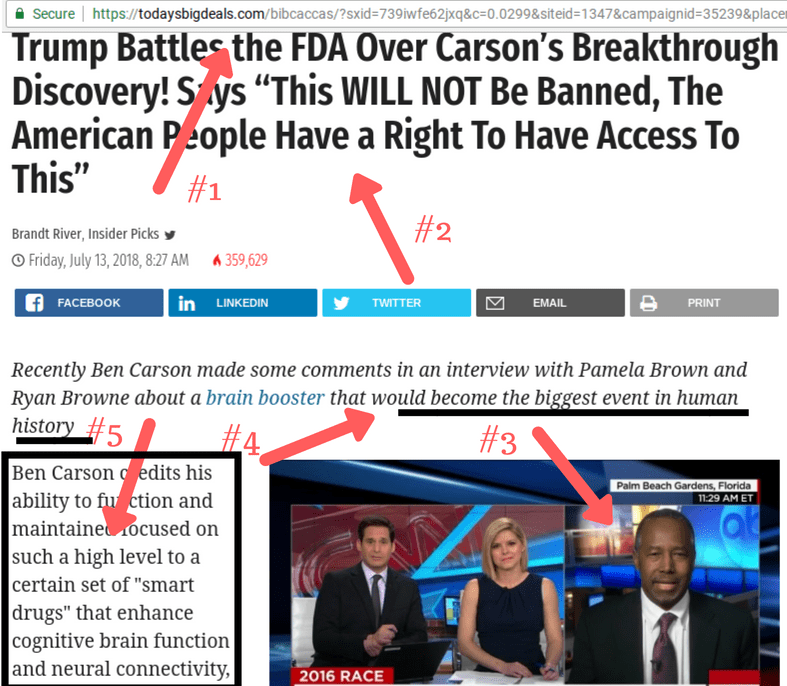 Go ahead and type it in your browser, it’ll take you nowhere.

That’s because it’s not a news site at all, it’s simply a landing page that cannot be tracked to an owner.

#2 – Very ‘newsy’ headline in look and tone.Accelleral uses the tried-and-true scam-tactic of name-dropping prominent figures to catch our attention, and a little mystery to keep us reading. What IS Carson’s discovery?!

And damn right I should have access to it!

#3 – A picture of Ben Carson himself.We’ll see this scam-tactic used all throughout the ‘news story’.

#4 – More BS to keep us on the edge of our seats.Ben Carson is a doctor after all, so if he says it’ll be ‘the biggest event in human history’, we should listen up!

#5 – Ben Carson now credits his incredible focus to a specific brain booster. What ever could it be?

By this point, we’re hooked. What is this breakthrough brain booster? What is Ben’s discovery?

And how can I get MY hands on it?

They pull us deeper into the story, dropping even more celeb names (this time Bill O’Reilly) and even include a super-generic video about brain pills that saysnothing about Accelleral. 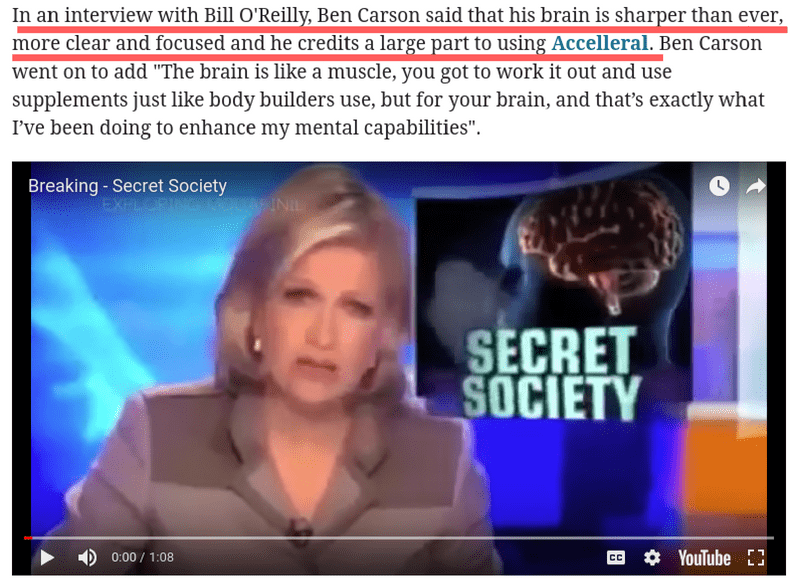 As we read on we come acrosseven more name dropping, this time accompanied with BOLD claims about the product’s effectiveness.

“Everyone that has taken this, from athletes like Tom Brady to actors like Robert De Niro have nothing but praise for the brain booster, which doubles IQ, skyrockets energy levels and connects areas of the brain not previously connected.

Accelleral works so well for these guys, we had to ask… Is it safe?”

Sheesh, these claims are so ridiculous that I wonder how anyone falls for it.

It’s like they just Googled “famous celebrities and sports stars” and pulled from the top of the list. 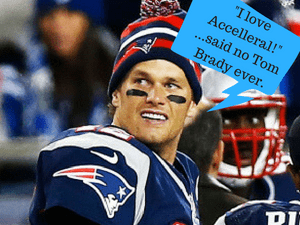 BUT… people are falling for it.

Because it’s human nature to strive to be smarter, more focused, more energized, and better all around.

In other words, we want everything that Accelleral is selling.

We want it to be true.

At this point, I’m sure you’re wondering who’s the brainchild (or brainchildren) behind this miracle pill?

They go on to add a few fake testimonials for fake social proof. Works every time.

Then, why not add an image of a couple more celebrities for good measure? 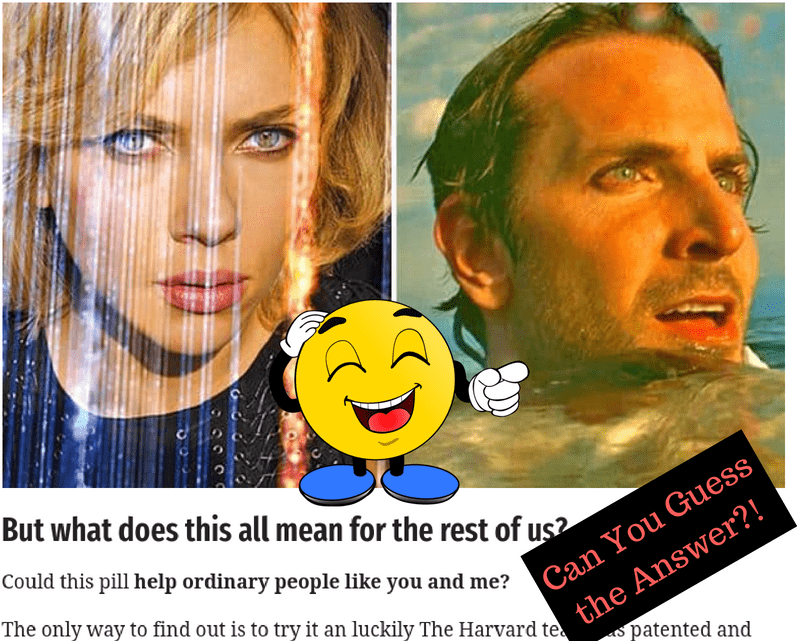 I’m gonna go out on a limb and say this pill does NOT work for an ordinary person like me.

Also, thanks Accelleral for doing me a solid and updating the story on July 14… AKA the VERY DAY I’m reading it!

Seriously, check it out… some may call it a coincidence.

I call it a scam-wincidence.

Oh, and btw, Denzel Washington endorses the product too. 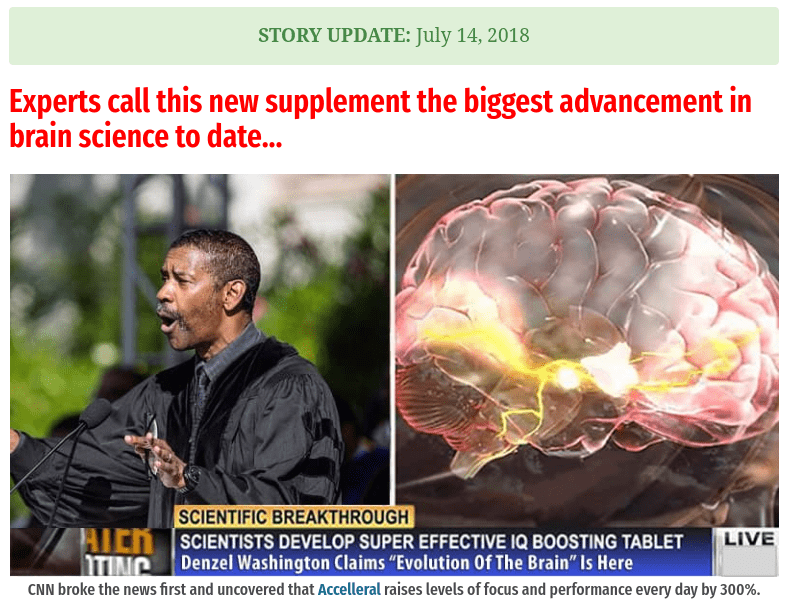 Also, they claim “CNN broke the news first and uncovered that Accelleral raises levels of focus and performance every day by 300%.”

Well, I took the liberty to do a quick search for “CNN + Accelleral.”

And guess what? I got NO results.

OK, well I did get something… I got this Forbes article all about how fake news articles are using billionaires to market their products.

Talk about Irony! (Forbes has served me similar ads in the past, too).

The ad goes on to show a photo of Stephen Hawking, who supposedly has “admitted to using Accelleral to triple his memory.”

What’s that I smell?

Is that some more Accelleral bullshit?

As we scroll down toward the bottom of the ad, fake Bill O’Reilly shares his fake experience taking Accelleral.

He gives us a play-by-play of his 14-day experience with the product, which is 100% glowing of course.

And sums it up by saying…

I mean, seriously, who do they think they are fooling?

I am sure some people fell for it and believed Bill O’Reilly actually endorsed the product, but using a little deductive reasoning should tell you that he probably has bigger fish to fry and wouldn’t put his name on something like that.

Now the moment of truth.

They try to sell us on a ‘Risk Free Trial’ of the fake brain-booster supplement… Will we bite? 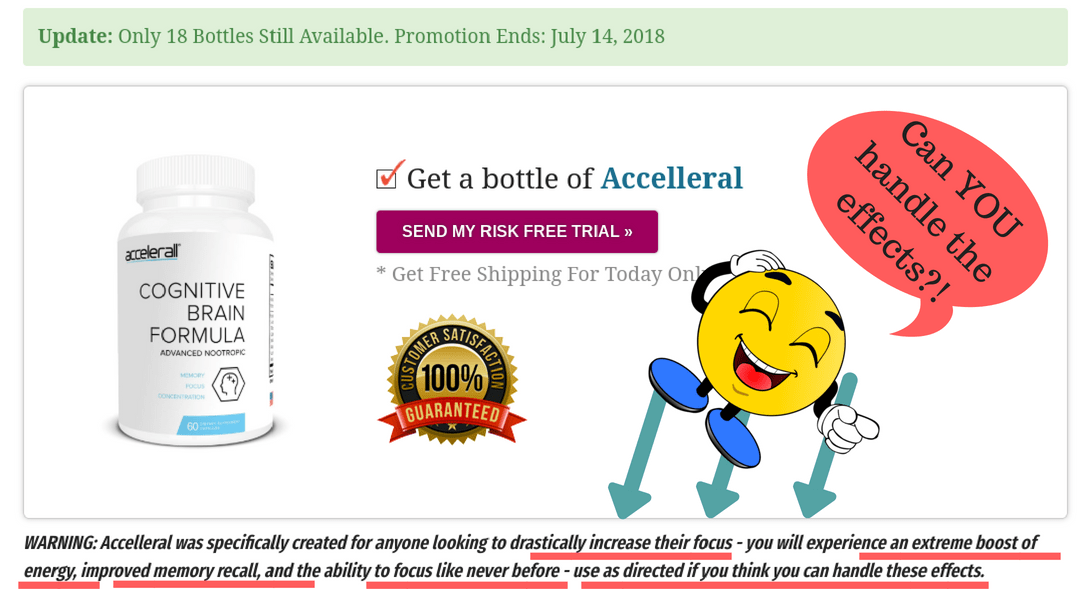 Related Article: How To Cancel A Supplement Free Trial (and get a refund)

You can search to your heart’s content looking for real user reviews for Accelleral, but you won’t find a damn thing.

However, in the fake news story, they really lay it on heavy with the ‘social proof’.

That’s right, at the very bottom of the ‘news story’ you’ll find a whole thread of Facebook comments praising the supplement. #bogustestimonials #faketestes 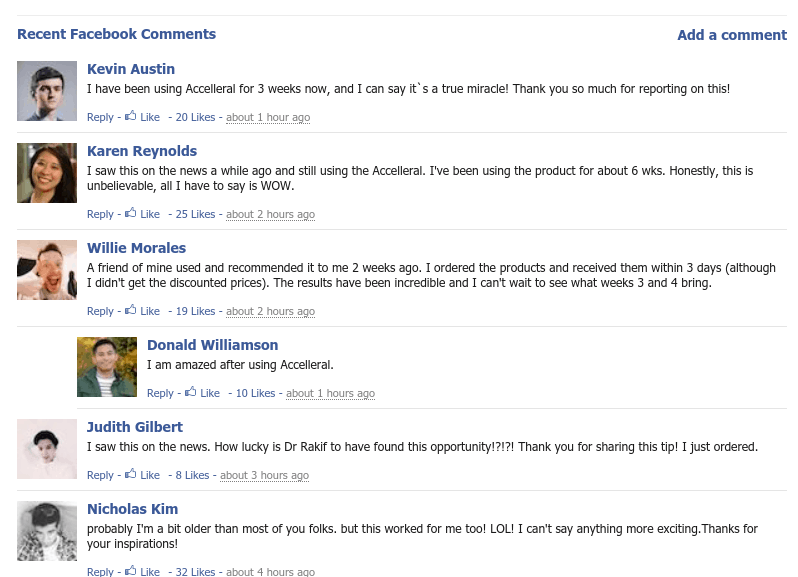 Yup, just like everything else in the advertisement, THESE ARE NOT REAL! Seriously, try to leave a comment of your own and you’ll see it doesn’t work. Scam-tastic!

Or one of them at least.

I did a search for the makers of the product, and I came up bone dry.

But after scrolling down the page some, I found a company called ‘Excelerol.’

Notice the difference in spelling…

Now I doubt this is the same company/product as Accelleral, but you never know.

It is a “brain health supplement” after all.

What are the ingredients in Accelleral?

It’s a mystery cocktail of who-the-heck-knows?!

If they go this far to scam people into buying the product, who’s to say the formula is legit.

I can almost guarantee it’s not.

In the advertisement, the only mention of ingredients is this…

“Natural vitamins and minerals.” Gee, thanks.

The side effects of Accelleral include everything up to and including:

If you DO buy the stuff, the best case scenario you can hope for is that you a.)actually get a bottle in the mail, and b.)don’t die.

Well OK, in all fairness, while the product might not be harmful (I honestly can’t say either way), I’m almost certain it won’t increase your memory or focus by 300% as it claims to.

I think by now you know where I stand on this product.

Accelleral is definitely a no-go and not worth it.

Unfortunately, good people are getting scammed left and right by fake news stories selling fake products like this one.

So I hope I was able to shed some light on what to look out for, and how not to get duped.

If for some reason you do happen to get scammed, AARP educates us on how to possibly recoup our losses.

Anyhow, best of luck out there in the wild west of the interwebs, and happy hunting for a brain booster supplement that actually works.

There are so many good brain boosters out there that don’t rely on robbing you blind and not thinking twice about it.

If so, write your review in the comments below!