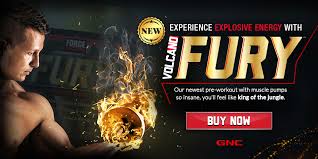 Force Factor products have gained a lot of attention over a fairly short period of time.

They’ve only been around since 2009, but since then they’ve taken the industry by storm with their testosterone boosting and pre workout supplements.

Just this month, they have a new offering on the market.

It’s a powerful pre workout powder designed for energy, focus, and pumps like nothing you’ve ever seen before.

By taking Force Factor Volcano Fury before your workout, you’re setting yourself up for the best workouts of your life.

According to a marketing executive at Force Factor’s parent company, you’re looking at:

And that hold true whether you’re an elite athlete, a hardcore bodybuilder, or a weekend warrior.

It does this mainly with its proprietary 3000 mg Noxplosion Pump Enhancement Complex that includes:

The formula also uses a Liquid Laser Energy Blend to help with focus and motivation.

This one packs a pretty good punch and includes:

How To Use Force Factor Volcano Fury

The instructions say to mix 1 scoop of with water about 15-20 minutes before your pre-workout.

Because of the heavy stimulant content, you’ll want to start out with only ½ a scoop at first, to assess your tolerance before moving ahead to the full dose.

Force Factor Volcano Fury is the newest supplement from the Force Factor brand which was started by two former rowers at Harvard.

It’s not quite as huge a success story as Facebook, but these two guys have done pretty well for themselves.

They started out in 2009 wanting to make supplements based on quality formulas backed by scientific results.

The focus is primarily on testosterone boosters and pre workout supplements.

Force Factor hit it big early on by making a deal to sell their products at GNC stores.

At this time, Force Factor has an A+ rating with the Better Business Bureau.

There are quite a few complaints regarding billing and customer issues (we’ll talk more about this in a bit), but they maintain their rating by always responding in a timely manner and attempting to resolve these issues.

When it comes to purchasing Force Factor Volcano Fury, you have a few different options.

If you like buying your supplements from a store, you’re in luck.

Force Factor products are all available for purchase at GNC stores, and the reps are generally pretty knowledgeable about them and their benefits.

If you like shopping online, there are also choices.At the official Force Factor website, a 30 serving container costs $49.99. Force Factor products are also sold at Amazon.com and Bodybuilding.com, but it doesn’t look like they carry Volcano Fury just yet.

Another way Force Factor sells some of its products is through their free trial offer.These are available all over the place online, and if you’ve spent any time on our website, you’re probably familiar with how they work.

Basically, you think you’re signing up for a free no-strings-attached trial and paying only shipping.

But that’s not what’s happening at all.

You pay a small shipping fee, and they send you a full 30 day supply.

Then they give you 14 days (from the day you place your order) to decide whether or not you want to continue using it.

If you don’t call and cancel within those first 14 days after you order, they’ll charge you full price for the “free” supply, then they’ll start sending you (and charging you for) a new supply each month.

This is what the vast majority of BBB complaints are about.

Guys sign up for what they think is a free or almost free way to try a new supplement, then they get hit with these charges they never expected.

I’m not sure why Force Factor participates in this kind of thing.

But Force Factor has the legitimacy of a supplement sold at GNC.

You would think they’d care more about their reputation than this.

I haven’t seen a free trial offer for Force Factor Volcano Fury yet, but it’s a brand new product, so they may be coming soon.

Force Factor Volcano Fury is classified as a nutritional supplement, and as such, it doesn’t go through the kinds of rigorous tests that drugs go through to get FDA approval.

And being a new supplement, there’s not a lot of customer feedback on it yet.

So it’s tough to nail down what kinds of side effects you might expect.

Force Factor Volcano Fury does contain a lot of stimulants, some of which have been known to cause negative side effects. Yohimbine is first on the list.

The FDA recommends against its long term use because it’s been known to cause mild, or even sometimes dangerous, side effects.

These include nausea, dizziness, racing heartbeat, and significant drops in blood pressure.

Citrus Aurantium is also a powerful stimulant that has some experts concerned about stimulant side effects, especially when used in conjunction with caffeine, as is the case here.

Judging by the formula, it probably packs quite a punch.

If you’re healthy and you like stimulant pre workouts, Force Factor Volcano Fury could be just what you need.

If you’re overly sensitive to stimulants, you may want to skip Fury for another Force Factor product.

If you do give Force Factor Volcano Fury a try, let us know how it works out for you.

Since it’s a new product, we’d love to hear how it’s working out in the real world.

I recently tried Volcano Fury and am pretty happy with the results so far. Almost immediately, even using half a scoop like this article recommends, I could feel more focused and energized at the gym.  I was less distracted and didn't want to quit as soon. Now I'm eased into the full scoop before every workout and can already see muscle growth.  I last longer, am more focused, and can push harder during my workouts using this powder.

I am writing this review on behalf of my boyfriend because he loves the product. He says that out of everything he has tried, Volcano is the only product that he likes the taste, while it still helps him maintain muscle and keep energy!

So I was wondering If I can use this with Nitrocut and Instant Knockout plus Testoful. -Brian G

You don't want to take Volcano with Instant Knockout. They both contain significant stimulants. You'd likely be overstimulated taking them both.- Rob

I drank this product today like around 8:30 pm I felt that works good but I could not sleep the whole night, when its the perfect time to drink it and no happen the same thing like today. I drank only half of scoop. -Jose

There's no perfect time that works for everyone, but aim for no closer than 6 hours before bedtime.- Rob

Will this cause a false positive drug test? -Alison

There's nothing in it that should, but it's always a good idea to bring a bottle of whatever you're taking to the testing site.- Rob