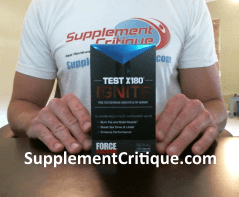 When I got the free bottle it said I had 18 days to cancel but on the night of the seventeenth day they charged my account and when I called on the eighteenth day the first Rep hung up on me the second was very rude and the manager did nothing. When I actually took the product I had an allergic reaction to it and sent me to the hospital.  I wouldn't recommend anyone doing business with force factor

Garbage and just another scam. It's just a bunch of caffeine and makes you feel jittery..no extra energy

This product is "PURE TRASH" I'm 65 yo. man and I've been taking it for a week now, but I'm going to quit it before it kills me. I'm having headaches all day with hi blood pressure.  DO NOT WASTE YOUR MONEY, it does nothing they say it does.